ABOUT THIS GREAT GAME

Everything You Wanted to Know About Us

What is This Great Game? 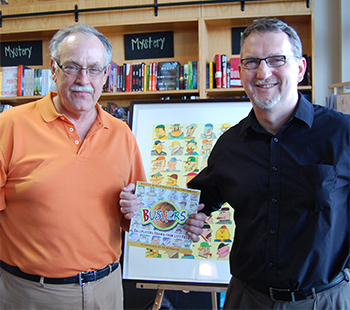 Since going live in 2005, This Great Game has evolved into one of the web’s most highly praised and comprehensive sites on baseball history. It covers a range of topics with holistic content that’s all but unmatched online. The core of the site is set up into eight main sections:

Home, where you can start every day with fun and informative quick hits on current baseball news, relative historical notes, and additions/updates to the site.

The Yearly Reader, the flagship of the site with the story behind every major league season since the start of the modern era in 1900, with news-makers, record-breakers and the fascinating (if not bizarre) events of the time.

The Teams, which features decade-by-decade oral histories and, so far as we know, the most comprehensive online lists collection of the greatest hitters, pitchers and most memorable games for all 30 major league teams.

The Interviews, an expanding compilation of chats with players ranging from cup-of-coffee participants to Hall of Famers.

The Ballparks, a cherished and growing category on this site where we break down, in great and unsurpassed detail, the on-field, architectural and political histories of each major league ballpark past and present, graced by intriguing imagery and factoids you may have never seen or read.

The Lists, an evolving cornucopia of countdowns covering various baseball topics including the 10 greatest home runs ever hit, the five least deserving MVP recipients, the 10 most influential people in baseball history, and so much more.

The Opinions, featuring our in-depth thoughts on current issues related to the game, predictions and recaps, movie reviews and the occasional off-beat subject.

The Comebacker, a monthly day-by-day look back at the historic moments, memorable highlights and odd events that shaped the baseball world every month dating back to 2015.

All this, and we’re not resting on our laurels. We continue to update and expand each of the above sections, and plans are in the works for new sections in the near future, so stay tuned.

How did This Great Game get started?

Two lifelong baseball fans, Ed Attanasio (a copywriter) and Eric Gouldsberry (a graphic designer) met through mutual friends in 1995. Their friendship began despite the knowledge that Ed rooted for the Dodgers, Eric for the Giants. But they soon discovered something in common: They were both deep into baseball history projects. Ed, a member of SABR (The Society of American Baseball Research), was in the process of interviewing retired ballplayers for the organization’s Oral History Committee. Eric, meanwhile, was working on research, writing and design for a mammoth coffee table book entitled Major League Baseball—The Twentieth Century, an ambitious project that ultimately could find no takers in the stingy book publishing industry. One day Eric and Ed decided to combine the strength of Eric’s book and Ed’s interviews for the Internet. They envisioned an energetic, unparalleled web site that would appeal to both the casual fan and the really serious baseball researcher/historian. The result is This Great Game—the creation of two huge baseball fans with a vast amount of knowledge about the game of baseball, and a vast amount of creativity to make it happen.

What’s behind the title of This Great Game?

Ed originally came up with the name because he thought it was the last three words in the famous letter written regarding the eight 1919 Black Sox players by baseball commissioner Kenesaw Mountain Landis—you know, the letter that told them they were forever banned from playing professional baseball after throwing the World Series. Turns out, Landis never wrote or said the words, so far as we know. Nevertheless, we decided to stick with This Great Game because it’s a great name and a great game (and because Ed had already purchased the domain name).

Why do you subtitle This Great Game “The Online Book of Baseball?”

Content is one thing, presentation is another. Many baseball web sites have the former but not the latter. Our vision is to promote a pleasurable, aesthetic and informative experience, as if you were reading a coffee table book. Such a vision needs a fusion of engaging writing and inventive design that will make you want to stay logged on for hours, and we feel we have done that. As professionals from the creative world, we’ve gone to great pains to brand This Great Game with solid content, sound presentation and an inviting look and feel. To do otherwise would not only be a waste of our time but that of our audience.

How is This Great Game best viewed?

We recently redesigned This Great Game as a responsive site—which for those of you who aren’t tech/web nerds means that it optimally “flexes” to whatever device you’re viewing it through. No longer will mobile users—who make up roughly half of our audience—have to pinch in or out to find an ideal viewing spot.

Organized baseball began way back in the mid-1800s. Why begin your Yearly Reader section with 1900?

We chose 1900 as the starting point for the Yearly Reader for two key reasons. One was the ending of baseball’s wild 19th Century evolution, which settled down by 1900 with a set of rules that remain firmly in place today. The other was the formation of the American League, which gave birth to a long, stable rivalry with the National League—cemented with the advent of the World Series. Though the AL began play in 1901, we include 1900 mostly as a review of 1800s baseball and as a prologue for what follows.

Eric Gouldsberry is owner of Eric Gouldsberry Art Direction (EGAD), a graphic design firm operating out of Silicon Valley, California since 1987. Eric has specialized in art direction for both graphic design and advertising, creating and producing corporate brochures and collateral, logos/brand identity, ads, periodicals, web sites and annual reports. Eric’s creative writing background goes all the way back to the age of 12, when he wrote sports articles for the Saratoga News. His combined love for design, writing and baseball led him to conceive the book Major League Baseball—The Twentieth Century, the unpublished contents of which now live in This Great Game. You can check out the work of EGAD at www.gouldsberry.com, and you can reach Eric via e-mail at eric@thisgreatgame.com

Ed Attanasio is a freelance advertising and editorial writer, standup comedian and baseball nut. A member of SABR, Ed has interviewed retired ballplayers for their Oral History Committee; many of those appear in our Interviews section. In July 2004, he was awarded with SABR’s David Paulson Oral History Award. He’s also quite the illustrator, with an unusual style that led to the creation and publishing of the book Bushers: Ballplayers Drawn From Left Field, with assistance from Eric. Ed lives in the San Francisco Bay Area with his happy dogs. You can reach Ed via e-mail at ed@thisgreatgame.com

What was the first baseball game you ever saw?

Ed: It was in 1967 at Yankee Stadium, the Yankees vs. the Twins, I think. I remember the Yankees stunk horribly that year with an aging, hobbling Mickey Mantle and Joe Pepitone, with his ridiculous long hair and swagger. I guess at the time he was going to be the next great Bronx Bomber (laugh). We would stay after the game and hang out by the player’s parking lot and yell at them for autographs as they drove off in their Dodge Darts and Cadillacs.

Eric: My first game I attended was in June 1972 at the Houston Astrodome. (The purists cringe.) The Astros lost to the New York Mets, 5-4. The nine-year old in me got a kick out of hearing the prerecorded bugle calling for the fans to yell, “Charge!” Willie Mays, 41 years young and a Met for a week after being traded by the Giants, appeared as a late-inning defensive replacement and received a standing ovation upon taking the field. My favorite memory of the game came when I shouted at Astros third baseman Doug Rader to hit a home run—and, on the very next pitch, he did just that.

If you have any questions, comments or requests in regards to thisgreatgame.com, please contact: