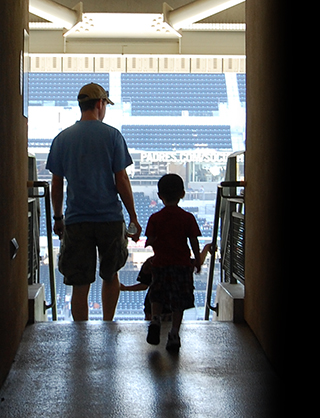 There’s that beautiful moment when a child walks into a major league ballpark for the very first time. Held by a parent’s hand, the youngster is electric in anticipation as he walks the outer concourse and nears his seat through the ballpark tunnel—or vomitory as it’s officially called, but that would spoil the romanticism of the moment. Walking through, the ballpark slowly reveals itself, its opposite side providing a tantalizing tease. Out of the tunnel, the child emerges into the light, his breath taken away by the panoramic majesty of pure architecture. It’s a virgin moment full of magic: The thousands upon thousands of seats, the multiple levels, the playing field soaked in green and brick red clay, the giant and effervescent video display beyond.

Stepping into a ballpark is an experience that never grows old, whether it’s the first time or the thousandth. But what is it about the ballpark, its inviting nature and enchanting appeal, which fascinate the patrons who cross its turnstiles? And why does it seem so special compared to the football stadium or indoor arena?

For one thing, the ballpark is rich and unique in charming, asymmetrical character. Baseball fans aren’t crazy when they refer to a ballpark as “he” or “she.” Life does seem to flow from a ballpark’s walls, its field, its box seats and bleacher benches. If these walls could talk, we’d definitely want to listen in to what they’ve got to say. And we swear we’d hear something.

Baseball feeds the ballpark’s vibrant warmth. The fans seem connected to the action because they sometimes are the action. They’re close enough to breathe on an outfielder’s back, to reach for the same pop fly the first baseman is after, to be alert for the next home run ball or runaway bat that comes flying their way. This near-organic relationship makes for an entertaining, palpable experience for the paying customer.

Other pro team sports can’t match this synergy, as spectators seem to be little more than mere witnesses. Take football. Outside of Green Bay’s historic Lambeau Field, there is no charm to speak of; there is only the field, the tall wall and the carefully constructed seating beyond that refuses audience participation. And even when that opportunity presents itself—on the extra point—officials quickly throw up netting to prevent the football from entering the stands.

Indoors, it’s the same story. Front-row basketball fans do get to line up along the edge of the court, but the focus on the arena dramatically drops off from there, a building spotlighting the action but leaving its surrounding character in the dark. When converted to hockey, these arenas offer even less personality, with boards and tall glass panes separating fans from the ice and its action—albeit understandably, given the violent nature of the sport.

The popularity of the ballpark has been repeatedly affirmed. Sometimes it’s bigger than the game itself, and not just in a physical sense. People don’t always flock to Chicago’s Wrigley Field to see the Cubs; they come to see Wrigley. It’s the same thing at Boston’s Fenway Park, or San Francisco’s Oracle Park, or Pittsburgh’s PNC Park. They want to walk the concourses, experience the quirks and cross it off the bucket list. It all shows that the best ballparks aren’t just civic achievements. They’re tourist attractions. They’re conversation pieces. They’re the places to see and be seen.

Granted, not every ballpark gets it right; for every Fenway, there’s a Metrodome. But old and new, past and present, beautiful and ugly, the ballparks are embraced, remembered, dissected and discussed—even years after they’ve been torn down. See all those ballpark books on the shelf? What a collection. See the ones on stadiums and arenas? We don’t either.

So how did ballparks evolve from the first humble, makeshift structures to today’s modern palaces? Here’s an era-by-era blow.

Welcome to The Ballparks.

The Ballparks, presented by This Great Game, is a comprehensive oral and visual review of major league ballparks past and present, detailing their origins and histories; the political, logistical, and aesthetic processes of building the facilities; and the end results from the perspective of the cities, the fans, the teams and their players.

A work in progress, The Ballparks is a modular process with new ballpark profiles added on a continuing basis until all 30 active major league ballparks and over 40 extinct or no longer in use are uploaded. We’ll keep you notified on our Twitter and Facebook pages of new additions.

If you have any comments or questions regarding The Ballparks, give us a shout.