“I had a deal with my grandmother that after playing (piano) for an hour, she would give me 25 cents to play the Bat Away arcade game at Coney Island. After a while, people would gather round to watch me hit and I got a reputation for being a good hitter. The spectators wanted to watch me hit more, so they would keep feeding quarters into the machine.” 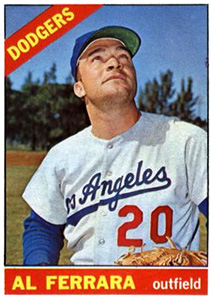 Al “The Bull” Ferrara played for the Los Angeles Dodgers, San Diego Padres and Cincinnati Reds from 1963-1971. Born in Brooklyn, New York, Ferrara was an accomplished piano player as a youth but his interests turned to baseball, as he gained a reputation as a good hitter in high school. In 1957, Dodgers scout Buck Lai, then the athletic director at Long Island University, arranged for Ferrara to get a baseball scholarship to LIU. After a successful season there, Ferrara joined the Dodgers in 1958. Playing with the Dodgers through the 1960s, he dabbled with acting roles on both Gilligan’s Island and Batman and appeared in several feature films. He played in only two games in 1968, ending his career with the Dodgers after an injury, but got selected by the Padres in the 1969 expansion draft, becoming one of their original members. In 1971, after playing 17 games with the Padres, Ferrara was traded to the Reds, appearing in 32 games almost exclusively as a pinch-hitter. His final major league game was on September 1, 1971, and today he lives in Southern California with his long-time companion, Kay Donno.

On Being a Young Piano Virtuoso:

“I learned the classics, because my piano teacher wanted to hear Beethoven and Bach instead of what I wanted to play, which was the popular music of that time. I got pretty good at reading music and playing even the difficult stuff, but to be honest I wasn’t crazy about doing it—I wanted to play baseball. So, I had a deal with my grandmother that after playing for an hour, she would give me 25 cents to play the Bat Away arcade game at Coney Island. After a while, people would gather round to watch me hit I got a reputation for being a good hitter. The spectators wanted to watch me hit more, so they would keep feeding quarters into the machine.  After a while, I got my grandmother to agree that if I could become the number one student in my piano teacher’s class, she would let me quit the piano and play baseball. I did a few recitals at Carnegie Hall, and when I was 16, I moved up to the top of the list. My days playing the piano were done, so I kissed my grandmother and never played it again.”

On Getting a Lucky Break:

“I don’t know why, but my senior year in high school was terrible. I batted less than .100 and people were saying this guy has lost it. Sportswriter Phil Pepe, who would eventually cover the Yankees and the Mets for many years, put me on the All-City Team based on my junior year. But, no big league teams were interested in me, so I started working on an assembly line, figuring my baseball career was pretty much over. With one day on the job, a friend of mine told me about an open tryout at Ebbets Field for the Dodger Rookies, an amateur team. They gave everyone four swings each and I hit three home runs.  They invited me to play in a game the next day and I went hitless, so I thought it was back to the assembly line. But for some reason, they called me the next day and asked me to play with them on an interim basis. They must have seen that I had some talent, because my performance in that one game wasn’t impressive, that’s for sure!”

On Being Signed by the Dodgers:

“I grew up a Dodgers fan, so can you believe how happy I was when they signed me? I was over the moon! In 1957, the Dodger scout Buck Lai got me a scholarship to play for Long Island University and I did well there. So, I signed a $9,000 bonus contract with the Los Angeles Dodgers the following year. I didn’t care about the money; I never gave a damn about the money. I was playing for the team I had grown up rooting for, even though they were now in L.A. instead of Brooklyn.”

On Sitting on the Bench:

“I went to the Dodgers’ GM Buzzie Bavasi and asked him why can’t I play more, and he gave me five reasons—Willie Davis, Ron Fairly, Tommy Davis, Frank Howard and Wally Moon. Would I have played more for teams like the Pirates or the Cubs? Probably. But, I knew that all of these guys ahead of me were super talented, so I was patient, at least at the beginning.”

On his Best Friend in Baseball:

“My very first roommate with the Dodgers was Johnny Podres, the pitcher who had that great World Series for Brooklyn when they finally beat the Yankees in 1955. We both enjoyed going to the race track and hitting the nightclubs now and then and we became friends for life. We talked every day until he passed away. He was a great pitcher, but most importantly, he was a good man and an incredible friend. If you can have a friend like he was at any time in your life, you’re a lucky person and I was honored to be his friend.”

“We were playing the Cubs and their pitcher Dick Ellsworth was throwing a no-hitter against us, which wasn’t a surprise, because even though we were a good team, our offense would disappear once in a while. They were ahead 1-0 going to the eighth but then they made an error and walked Dick Tracewski. (Dodgers manager Walter) Alston told me to go in and pinch-hit and I thought, man—I don’t want to be part of a no-hitter. But, I also I saw those two runners and I thought wow, this is an opportunity, because I was having a lousy season. I hit a home run and we won 3-1. Ellsworth was a lefty and a damn good pitcher, but he was tired by the time I got up there, and I was happy to get that hit. I wasn’t a great pinch hitter, because I wanted to play every day, but Willie Davis and Ron Fairly got most of the action and I hated sitting on the bench. So, they sent me to Spokane and it actually worked out well. I batted around .300 up there and they called me back at the end of the season.”

“I was always confident of my abilities, so when I had a decent year it surprised other people, but it didn’t shock me. I got to bat cleanup and led the team in almost every offensive category. I think I finally showed the critics that I could play in the big leagues and my numbers that year proved it. (.277/.345/.467 with 16 homers). I was voted the Dodger of the Year. I know, the team had a down year, but I’m still proud of what I did for that team in 1967.”

On his Acting Career:

“I was able to appear in a bunch of films and episodes of Gilligan’s Island, Baretta and Batman through my connections with some Dodger fans that were in show business and also through my former teammate Lee Walls, who later became a fairly successful talent agent. My first job was playing a gas attendant in a film called Hitch-Hiker way back in 1953. My last movie was called Dracula’s Dog in 1977 and it surely was a dog! I played a spider in an episode of Batman called “Caught in the Spider’s Den” with Tallulah Bankhead and another one called “Minerva, Mayhem and Millionaires” with Zsa Zsa Gabor. I knew I wasn’t going to win an Oscar and I really didn’t pursue an acting career, but it was fun.”

“It was only the second game of the season and I broke my ankle and that was the end of my season. Tommie Agee hit a liner and I lost it in the lights and I caught my spikes in a sprinkler and broke the ankle. I wasn’t the best outfielder to begin with, but this was really a freak thing. They took me to the hospital and Dr. Robert Kerlan, the team doctor, said, ‘let’s set the ankle Vietnam style’ without any pain medication and oh boy, that hurt.”

“In 1971, I was traded to Cincinnati after hitting only .118 in 17 games for San Diego. In return, the Padres got Angel Bravo and some cash. In my first game with the Reds, I made an error that cost the team a run. Cincinnati’s Manager Sparky Anderson was upset with me about it and got in my face a little when I got back to the dugout. I didn’t know how to respond, so I told him, what do you expect for Angel Bravo—Willie Mays?” The rest of the team heard it and thought it was hilarious, especially Pete Rose, but Sparky wasn’t smiling. After that, things went downhill even worse, and I knew after a while that my days in Cincinnati were numbered.”