The Diamondbacks’ Five Most Memorable Games

THE DIAMONDBACKS BY THE DECADE

A hotbed of baseball previously considered too hot for summer play, Phoenix was given the Diamondbacks for 1998 after building baseball-specific Bank One Ballpark (now Chase Field) with a retractable roof to keep the stifling desert heat out. The team lost 97 games in its inaugural campaign, but owner Jerry Colangelo was not content to take baby steps out of expansion infancy, handsomely paying star players Randy Johnson, Matt Williams and Jay Bell to come play in Arizona; the Diamondbacks thus surged to 100 wins and a NL West title in their second season.

Under rookie manager Bob Brenly, the Diamondbacks put it all together in an unforgettable 2001 season that ended with a dramatic seventh-game win over the New York Yankees in the World Series. A payroll bubble ensued and once it popped, the Diamondbacks crashed to 111 losses in 2004. From those ashes, a more humbly assembled roster slowly brought the team back to life in 2007 with the league’s best record (though oddly allowing more runs than they scored), before regressing with a free-swinging lineup that included Mark Reynolds, who thrice surpassed 200 strikeouts in a season.

A mixed decade of results for the Snakes, who experienced the occasional highs (a fifth divisional title in 2011 under Kirk Gibson, who briefly remade the team in his own hard-nosed image) and occasional lows as they flirted several times with 100 losses. Five different managers—and five different general managers—didn’t help in the struggle to achieve a consistent winning vibe. There were repeated positives from perennial All-Star first baseman Paul Goldschmidt, and a competent rotation headed toward decade’s end by veteran Zack Greinke.

The Diamondbacks pushed a modest home-grown youth movement, and despite some potholes along the way—most notably with a 110-loss disaster in 2021—there’s potential progress toward a mid-decade upswing utilizing solid pitching and speed on the basepaths. Perhaps the most impressive aspect of the DBacks’ current state is that manager Torey Lovullo (hired in 2017) has managed to stick around through it all.

Highlights of the Diamondbacks’ History on This Great Game:

Ballparks of the Diamondbacks 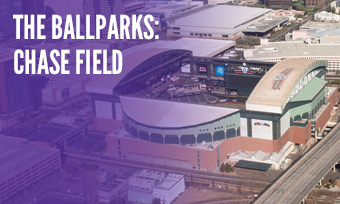 Who’s on the Mount Rushmore of the Arizona Diamondbacks?

When all else failed, there was the All-Star first baseman/slugger, who automatically delivered every year with amiable precision.

Fan favorite and team leader in most all-time major offensive categories; stroked winning hit to give Arizona world title in 2001.