“Those players who cheated by using steroids, I hope they never get into the Hall of Fame. If Ted Williams or Mickey Mantle had used those drugs, they would have hit 1,000 home runs each, so the steroid users should have their records thrown away forever.” 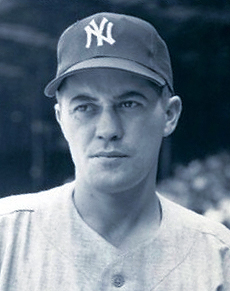 Art Schallock was a left-handed pitcher for the New York Yankees and Baltimore Orioles from 1951-55. He appeared in 58 games and had 14 starts,  allowing 199 hits and 91 walks in 170⅓ innings of work with 77 strikeouts. In the 1953 World Series against the Brooklyn Dodgers—the team that initially signed him—Schallock pitched in one game, giving up a run on two hits, a walk and a strikeout over for two innings. He also played for three Pacific Coast League teams as well as the Kansas City Blues and Montreal Royals in other minor leagues.

On his First Roommate with the Yankees:

“I didn’t know who they would assign me to be with. I figured it would be with another rookie or another young player, but when they told me it would be Yogi Berra, I was surprised. It was a great experience, because Yogi knew all of the batters in the American League at that time. He knew how to pitch to them and what their weaknesses were. Yogi never wrote anything down; it was all up there in his head. He knew his stuff and I learned a lot from him. People used to joke about Yogi being not that smart, but he was sharp as a tack and a wonderful guy.”

“To get on the Yankees’ roster, they had to send someone down and it turned out to be Mickey Mantle. He came back quickly, but for many years Mickey and I would joke about it. Mickey was a wonderful person and when he first came to New York, he was drinking root beer floats. But, then some of the other players introduced him to alcohol and that’s when his problems started. Later when I was pitching for the Orioles, he hit a monster home run against me and smiled all around the bases. When experts talk about the greatest player of all time, they usually say Willie Mays, but in my opinion he is #3 on my list. I have DiMaggio at the top, Mantle second and Mays is third.”

On Playing for Three PCL Teams:

“Growing up in the Bay Area, I wanted to play for the San Francisco Seals, but that never happened. I played for the Oakland Oaks, Hollywood Stars and Seattle Rainiers and it was a great experience. When I was pitching for Hollywood, I started a few times against the Seals and did really well. Their manager Lefty O’Doul used to say that he should have signed me when he had the chance, which made me feel great. The fans in the Pacific Coast League were so supportive and to be honest, the talent there was in some ways, better than with some of these second division MLB teams.”

“He never got a hit off me; I think Williams was something like 0 for 24 against me. Check the stats if you don’t believe it. (Editor’s Note: We did. Williams was 0-for-2 lifetime vs. Schallock.) I don’t think I struck him out very much and I do remember that he knocked down a couple of our infielders with line drives, but they threw him out and kept my record against him perfect.”

On the Best Pitcher he Ever Saw:

“That’s easy, it was Allie Reynolds. He was such a competitor, it was unbelievable to see him in important games. One thing that may have affected his career is that he didn’t get along with some people, including the press. The press in New York could be brutal and if you had one bad game, they would trash you, unless you were a major star. We called Allie ‘Super Chief’ because he was part American Indian and a terrific teammate. He was also a smart businessman who got rich after his career by buying a bunch of oil wells.”

“I used to go to Giants and A’s games, but no more. As a former player, it’s hard to sit there and watch the game, because I figure I should be in the dugout or out there playing. The game has changed a lot and the big money they make now is crazy. I don’t even want to think about what I would make today. Also, those players who cheated by using steroids, I hope they never get into the Hall of Fame. If Ted Williams or Mantle had used those drugs, they would have hit 1,000 home runs each, so the steroid users should have their records thrown away forever.”

“I had a great career; I can’t complain. I played with some of the best that ever played and I have three World Series rings. Sure, playing in the majors was stressful at times, but overall I loved every minute of it and I always look back fondly.”