The Future: The Shape of Ballparks to Come

Now that the retro ballpark boom has run its course, what do major league teams and architects have in mind for the next era of new facilities? Here’s a few hints of what might be ahead. 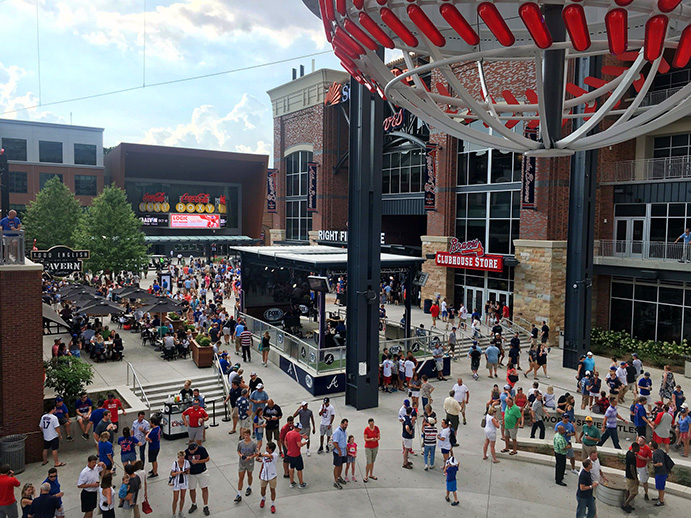 The ballpark boom of the 1990s and 2000s was so highly praised—aesthetically, if certainly not politically—that it’s been hard to imagine the current golden palaces of baseball eventually being scorned upon as passé, just as the steel-and-concrete ballparks were during the 1960s, or as the multi-purpose stadiums were when Oriole Park at Camden Yards debuted. But as we have seen with 100 years of ballpark trends, attitudes change. People change. America changes. As Oriole Park and the other early entrants in the retro ballpark movement approach middle age, one begins to wonder: What’s next?

For now, the retro vibe has worn off. Three of the majors’ most recently built ballparks—Miami’s Marlins Park, Washington’s Nationals Park and Minnesota’s Target Field—are decidedly sleek and modern structures that owe more to Tomorrowland than Fenway. Any nostalgia within these venues has been asked to move to the bleachers.

Change occurs very slowly, then all at once. It’s a statement baseball is no stranger to. Nobody in the early days of the Deadball Era saw the sweeping changes coming in the form of steel and concrete. In the 1950s, few envisioned the multi-purposed, civic monsters that would soon dominate the major league landscape. And in the 1970s, any thought to build something akin to Wrigley or Fenway would have been scrunched up into a mental wad and tossed into the cranial wastebasket.

There is some fragility in the existing line of ballparks that could spell a new trend. Late in 2013, the Atlanta Braves stunned baseball by announcing a move to a proposed new ballpark 15 miles north in suburban Cobb County for 2017. This, before their existing facility, Turner Field, would have a chance to reach drinking age. The move isn’t about fleeing the inner city back to the Burbs, or leaving an old, outdated ballpark; as always, it’s about the money. To understand this, know that the Braves’ new facility, SunTrust Park, isn’t just about the ballpark itself, but rather an entire entertainment complex that will include a “main street” lined with retail, restaurants, businesses and hotels that lead right up to the ballpark. It’s not unlike the vision Philip Bess outlined back in the late 1980s with Chicago’s Armour Park, though the Braves’ project is more mixed-use in a commercial vein. And who stands to mostly profit from the development? Why, the Braves, of course.

As usual, the other teams will be closely monitoring how the Braves make out with this ambitious project. If it becomes the talk of the town and the place to be—like Oriole Park at Camden Yards 25 years earlier—other teams will act on it. They’ll use the aging retro parks as an excuse, just as the Braves did: Pony up to spend hundreds of millions to doll up the joint, or we’re leaving for the next town down the street.

In terms of the ballparks themselves, are we in for radical changes? Think first about the baseball viewing experience at home. It’s pretty good. You have your sizeable hi-def TV in front of you; you have the game showing the best views of the action, multiple replays and up-to-the-minute information. You also have relatively cheap food and drinks at your side, the capacity to pause the action to head to the bathroom (without waiting in line for a stall, mind you), and it’s all right there at home without having to spend money on gas, transit and parking. Now think about that seat you have down the left-field line. You have the in-person view and the panoramic vision of what’s happening on the field, and that’s great. There’s the giant video board that gives you replays, but it still functions more as a marketing device for the team, showing upcoming promotions, birthday messages, dot racing and kissing couples. Finally, you’re hoping the people around you are behaving. Sometimes, they just aren’t, as your frayed nerves from the nonstop profanity and the soaked, beer-stained back of your shirt will sometimes attest. 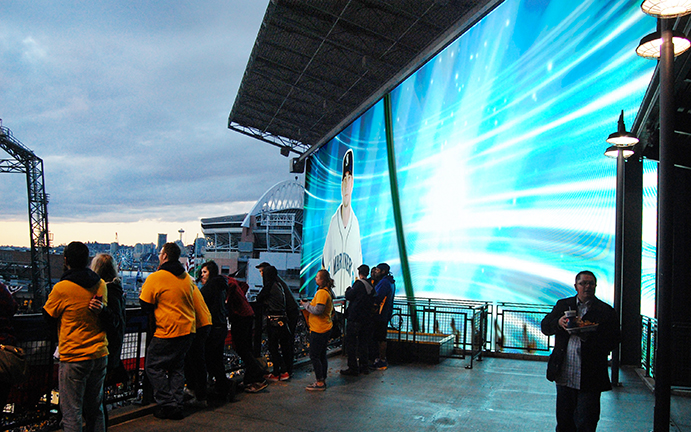 The hi-tech factor continues to be a more visible force at ballparks, as shown here with the 202-foot-long video scoreboard at Seattle’s T-Mobile Park. To wrest fans to the ballpark from their man caves, teams will need to take more advantage of available technologies.

With major league attendance having dropped some 10% since its 2007 apex, teams should be starting to think about how to bring the home theater experience to the ballpark. Start with the giant hi-def video boards—massive, brilliantly bright screens that dominate the attention of those looking out toward the outfield. But how about multiple boards, smaller ones, perhaps to show other games taking place before the games or between innings? Maybe it’s overkill, but how often do you hear of people experiencing seizures from the overstimulation of multiple screens at sportsbooks or the local bar and grill?

Perhaps the experience can be more personable. Outfit the seats with outlets for mobile and tablet devices, encourage the fans to plug in, catch up on their fantasy teams, check other games, order food and other merchandise—all assuredly to be brought to you by a major corporate sponsor. Some of that can be done now, but the ballpark infrastructure has yet to mature with the technology and take full advantage; the ballpark needs to be a conduit, not just a park bench, for people to get connected and follow the game to their optimal advantage.

For the architects, designing a ballpark has become far more complicated than it was over 100 years ago, when it was just a matter of putting together an entrance, seats and a field. Beyond the technology, the mixing up of standard seats and suites and the myriad of dining and retail options within, ballparks now demand to be more environmentally conscious and remain intimate and inviting in the face of increased security challenges. Somehow, the architects deliver, and they should continue to—making the ballpark as big an experience as the game of baseball itself.

Back to the 1990s-2010s: Coming Home Oriole Park at Camden Yards opens the door for a new wave of ballpark construction as teams return to their roots and embrace yesteryear with a clever eye toward massive revenues.