“It was the last day of the season, and I was ahead by two bases. I was going to take the day off, then some guy stole three and took the lead. So, I went in the game in the fourth inning as a pinch-runner and stole second and third to finish the season with the title. I also ended up ruining Nolan Ryan’s shot at a 20th win.” 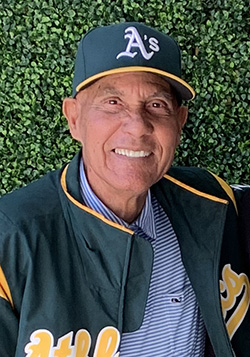 Bert “Campy” Campaneris played for four American League teams, primarily the Kansas City/Oakland Athletics. A big part of the Oakland championship teams of 1972-1974, he holds the A’s franchise records for career games played (1,795), hits (1882), and at-bats (7,180). Campaneris led the AL in stolen bases six times between 1965 and 1972 and retired with the seventh-most steals in MLB history (649). Defensively, he led the league in putouts three times; his career totals at shortstop place him among the all-time MLB leaders in games played (5th, 2,097) and double plays (7th, 1,186) at that position. Campaneris is the cousin of former MLB player Jose Cardenal and his favorite ice cream flavor is Pralines and Cream.

On Stealing the Stolen Base Title in 1972:

“It was the last day of the season, and I was ahead by two bases. I was going to take the day off, then some guy (Dave Nelson of Texas) stole three and took the lead. So, I went in the game in the fourth inning as a pinch-runner and stole second and third to finish the season with the title. I also ended up ruining Nolan Ryan’s shot at a 20th win. I told the reporters that I know I can steal on that guy. He pitched so slow and he threw fast, but he took his time throwing it.”

On Throwing the Bat at the Tigers’ Lerrin LaGrow:

“In the bottom of the seventh, LaGrow threw at me and hit me in the ankle. I had three hits already and two stolen bases and Billy Martin (Detroit’s manager) wasn’t happy, so he told LeGrow to hit me. When I got hit, I was so mad I threw my bat at LeGrow and he ducked. Martin said it was a gutless move, and that he would have had respect for me if ran out there and punched LeGrow. I got kicked out of the game and my ankle hurt for a few days. I just lost my temper and I do reject doing it. They suspended me for the series and fined me $500, but the commissioner said I could play in the World Series. Everyone wants to talk about it.”

“The Reds were a powerhouse, but we weren’t worried. They beat us pretty good in Game Six (8-1) to tie (the series) up. When I came up to bat, I told Johnny Bench that we never lose three in a row and he said that we never played the Big Red Machine. I didn’t have a very good series (.179) and pitching dominated the whole thing. In Game Seven, we went ahead when Gino Tenace hit a double and knocked me in in the sixth inning.”

“We had another great season (94-68 record) and then we had to play the ALCS against Baltimore. I had a good series. In Game Two, I went 3-for-5 and stole a few bases, and then I hit a walk-off home run in Game Three. We won the series 3-to-2. We went up against the Mets in the World Series and did well. I stole three bases, and hit a two-run home run in the third inning of Game Seven. Reggie Jackson won the Most Valuable Player award for the series, and I thought I should have gotten it. But I wasn’t mad because Reggie is a good friend and I congratulated him when he got it.”

On Winning Three Straight in 1974:

“We beat the Orioles in the ALCS easily and then we took the Dodgers in five games in the World Series. I hit almost .400 in that series, and the whole team performed well. (Joe) Rudi made that big catch and our pitching was great. It was our third year in the World Series, so we weren’t distracted, but I think the Dodgers weren’t ready for it. There are always a lot of distractions during the postseason, so you have to be able to focus and just play the games. We had a great team with one thing in common—we didn’t like Charlie (Finley)! If Finley had kept that team together, we would have won two-to-three more championships because we got better every year.”

“Finley had good scouts, and he knew how to find talented players. But he was tight with salaries. He was a good businessman, but when it was time to pay his people right, he got mad at them. In 1976, I thought now I will finally get the money I deserve. Charlie didn’t like raises, so he offered me $90,000, but I wanted $120,000. We lost Reggie that year and they traded Ken Holtzman, and some of our players were getting old. I did steal five bases one day, which was a team record. But I made a lot of errors (23), I didn’t hit well (.256), and we ended up finishing second to the Royals.”

On Finally Getting Paid:

“My agent said we had 12 teams interested in me, so I knew I could make some good money. I signed a contract for five years ($750,000) with Texas. Their GM said he wanted me for my speed and my defense, but I told him I can hit a little too. In 1978, I had a bad year, and they weren’t too happy with me after that. They started pulling me out of games for pinch-hitters, and that was the first time it ever happened. I never lost my confidence and told people that I’ll play as long as my legs and arms allow me—which I did.”

“Some people did not like him, but I loved the man because all he wanted to do was win. Finley drove him crazy because Charlie knew very little about baseball, but since he was the owner Dick had to listen to him. Williams said that he would not be mad at a player when he made a mistake, as long as you tried.”

On Being a Yankee for a New York Minute:

“I went to Spring Training in 1983 when the Yankees sent me to Triple-A Columbus, where I batted more than .300. When their second baseman Willie Randolph was injured, I was called up, and in his first start I had four hits and stole a base. I played in 60 games for the Yankees, hit better than .300 and backed up on second base and third base. I got released by New York after the season was over and my retirement started, as a coach for Houston and San Francisco. I moved to Scottsdale, Arizona and had a lot of fun being involved in the charity golf tournaments held by the Major League Baseball Players Alumni Association and attending baseball camps during the offseason.”