“They didn’t want us to lift weights or do activities like swimming. They said those exercises used the wrong muscles, so they frowned on them. They had us doing sit-ups and push-ups and even the running was limited, because they were afraid of us getting shin splints or turning an ankle.” 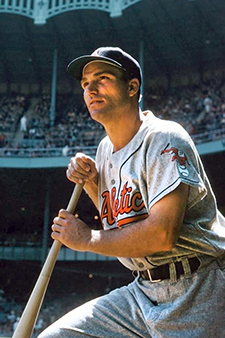 Playing for the Kansas City Athletics in 1955, Bill Renna waits on deck at Yankee Stadium—his first major league home as a rookie in 1953.

Bill Renna was a left fielder for four different teams from 1953 to 1959. Nicknamed “Big Bill,” he was a former football player listed at 6’3” and 218 lbs., and he was one of the first of several Santa Clara University graduates to reach the major league level. Renna broke into the majors in 1953 with the New York Yankees, playing there for one year before joining the Philadelphia/Kansas City Athletics (1954-56) and Boston Red Sox (1958-59). His most productive season came in 1954 with the Athletics, when he posted career-high numbers in home runs (13), runs (52), RBIs (53) and games (123) while hitting .254. Primarily a pinch-hitter for the 1958 Red Sox, he collected 18 RBI on only 15 pinch hits.

In a six-season career, Renna was a .239 hitter with 28 home runs and 119 RBIs in 370 games. Renna became part of the minor league record book while playing for the Kansas City Blues of the American Association. On June 29, 1952, the Blues belted ten home runs against the St. Paul Saints to set a league mark for most home runs by one team. Kansas City collected 53 total bases and hit six homers in one inning, also AA marks, en route to a 17-4 win. Roy Partee hit three homers (including two in the big inning), while Renna, Vic Power and Kal Segrist collected two apiece and Andy Carey added one.

“It was quite a day. It was also the very first major league game I ever saw. So, the first game I saw was the first game I played in. You know, I grew up on the West Coast, so we didn’t have major league baseball there. There was no TV and very little radio, so the only baseball news pretty much came from the newspapers. I went to spring training with the Yankees in 1953 and there was an outfielder spot available, so I grabbed it and held onto it. Stengel platooned me with Gene Woodling in left field, alongside (Mickey) Mantle in center and with (Hank) Bauer and (Irv) Noren in right field.”

“He was always fair to me, I enjoyed being around him and I have no complaint about the man. He was an astute manager and he knew how to handle people, even though some guys didn’t care for him. He was brilliant at knowing when one player would be hot and vice versa. We were winning, so no one could really complain about him. His record proves that he was a great manager.”

On Players Who Weren’t Health-Conscious:

“A lot of players smoked cigarettes back then, including me. We didn’t eat healthy either—most of us had steak and eggs for breakfast, steak sandwiches for lunch and surf and turf for dinner—every day if we could get away with it! And they didn’t want us to lift weights or do activities like swimming. They said those exercises used the wrong muscles, so they frowned on them. They had us doing sit ups and pushups and even the running was limited, because they were afraid of us getting shin splints or turning an ankle. They know so much more now about nutrition and exercise and the equipment and the technology is so much more advanced. Now they have eight trainers, two doctors and three nutritionists. Back then, we had no trainer and one clubhouse guy to bring us coffee and cigarettes. That was pretty much it.”

“The veterans hung out in small groups and the rookies just kept their mouths shut and tried to not get noticed. It was fine, because everyone respected each other and we were all focused on winning. We were a tight group when we were on the field and then after the game everyone did their own thing. Billy (Martin), Mickey and Whitey (Ford) were in one group. Mickey and I got along fine, but we never shared a drink, because he was in a different group and I was home most of the time.

(Allie) Reynolds, (Vic) Raschi and (Ed) Lopat hung out in their own area. Sure, they were congenial to the rookies, but you didn’t go out for dinner with them after the game, let’s put it that way. They were civil, but far from being warm and fuzzy. I was wet under the ears and just pretty much observed everything without really participating in things. Once in awhile, one of the veterans on the team would invite me out with the rest of the group, but I didn’t really carouse much and I was married, so I declined. When they were out doing their thing I was with my wife, which kept me out of trouble. Later, that incident at the Copacabana made a few guys look bad, and I remember thinking at the time that I was happy for not being there.”

“I did not get to play but I was on deck to pinch hit a couple times. It was a little frustrating to get that close and not even get an at-bat. Before Game Five in Brooklyn, Mickey Mantle got hit pretty good on his hand with a line drive during batting practice. You could hear a loud crack when it hit him and he walked into the clubhouse right away to put ice on it. So, when fielding practice started, Casey told me to go out in center field. I took fielding practice there, so I figured I’m going to start the game at center. I was starting to get excited thinking that I was going to play! In those days, you would throw your glove down on the field after each inning, so I just left my mitt out there. My parents were in the crowd, and they were thrilled, because it looked like I was going to play. They saw my glove out there on the ground and they thought he’s gonna play. I went into the clubhouse and went over to Mickey. I asked him ‘How’s it feeling, Mick?’ He told me it was fine and he would be all right. I patted him on his back and said ‘Great!’ but really I was depressed. So, I found the bat boy and I told him to go out there to center and get that glove for me. My father later told me that he was watching that kid when he went out there to retrieve that mitt and his heart sank about as far as mine did.”