“Walter O’Malley told the press that I would have been the No. 1 player in the expansion draft if I wasn’t protected. He also said that ‘Grabarkewitz has all the credentials, but what are credentials worth on crutches?’” 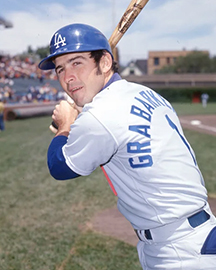 Billy Grabarkewitz played seven years (1969-75) for the Los Angeles Dodgers, California Angels, Philadelphia Phillies, Chicago Cubs and Oakland A’s. He was a high school phenom at Alamo Heights High School in San Antonio, lettering in baseball, basketball, football, golf and track. In 1963, he played for the now-defunct Sagamore Clouters of the Cape Cod Baseball League. Subsequently, he attended St. Mary’s University in nearby San Antonio for two years before being chosen by the Dodgers in the 12th round of the 1966 amateur draft. After playing in the minors for three years at three levels, he made the big team in 1969 and got off to a torrid start for the Dodgers the following year, batting .420 at one point and ahead of Roberto Clemente and Rico Carty for the best average in the NL during the season’s first half. After being chosen as an All-Star, Grabarkewitz cooled off but still finished with decent stats (.289, 17 home runs and 84 runs batted in). He would never emulate that performance again, although he was always a valuable role player with all of the teams he played for. Today, he owns a very successful life insurance company with more than 2,000 agents nationwide.

“The Dodgers decided to stock up on shortstops. They picked me right between Bill Russell and Ted Sizemore. Bill was an All-Star and a fixture in L.A. for 17 years and Teddy was Rookie of the Year in 1969. I guess you can’t have enough good shortstops. I had a small advantage because I could play every infield position except for first base and they would stick in my left field every once in a while.”

On Being Blue for Life:

“My father was a huge Brooklyn Dodgers fan so I became one too. He loved Pee Wee Reese and Don Newcombe and I remember watching the 1956 World Series with him on our old black and white TV with bad reception. It was awesome when my first manager in the minors was Duke Snider, he was a great guy and so fun to play for. When I got drafted by the Dodgers, I was thrilled and couldn’t wait to go through my first Spring Training at Vero Beach in 1967.”

On Bad Hops and Missed Opportunities:

“Everyone was telling me that I was the top prospect in the Dodgers’ farm system in 1968, so they promoted to me Albuquerque in the (Double-A) Texas League. I broke a finger early in the season on a bad hop and then I was sidelined when I got hit by a pitch and broke my wrist. I could hit, so I figured eventually I would get a shot. Zoilo Versalles was batting less than .200 and it looked like they wanted me to take his spot. Everything was going well, and then I broke my ankle in four places when my spikes got caught in the catcher’s shin guard during a play at the plate. I was having a great season (.308 average, 10 homers) and they protected me in the expansion draft. That’s when Walter O’Malley told the press that I would have been the No. 1 player in the expansion draft if I wasn’t protected. He also said that ‘Grabarkewitz has all the credentials, but what are credentials worth on crutches?’”

On the New Kids Right Out of the Block:

“Ted Sizemore, Bill Russell, Willie Crawford, Alan Foster, Bill Sudakis and myself all came up around the same time. So, we used to hang out quite a bit. Some reporter started calling us ‘The Mod Squad’ after the TV show. We were flashy dancers and the nickname stuck. I started off hot in my first game against the Braves, with three hits and three RBIs, but after that I got into a bad slump and in June I got sent down to Spokane after they got Maury Wills back.”

On Grabbing the Spotlight:

“I had a great Spring Training in 1970 and they were playing me at third behind my buddy Steve Garvey. But during the season’s first week, Sizemore got hurt, and that gave me the chance to play every day at second base. The injury gave me the starting job and then a year later I got hurt and I was out. When Sizemore came back from the injury, I was moved to third because Garvey had a bad streak where he batted less than .100 (actually .048). I had a good run after that, and I finished April with a .429 average. I did get hit by a (Nolan) Ryan fastball and I told the reporters that I had a mark where the ball hit and that it was still there on Christmas Day—seven months later!”

“I had a lousy July, batting around .200 and I was striking out a lot. That’s when they started messing with my stance and wanted me to use a heavier bat, thinking that I would start hitting more to right field. August wasn’t any better, even though I was leading the team in hitting and homers. During the offseason they traded Sizemore to the Cardinals, so I figured I was going to be the Dodgers’ starting second baseman in 1971.”

“Grabarkewitz was a favorite with the media because he always gave them great quotes. “Abner Doubleday dreamed up this game [of baseball] to drive people crazy.” “I’ve been X-rayed so many times, I glow in the dark.” “If the Dodgers will go to the expense of putting my name on the back of my uniform, I’m pretty sure well they won’t trade me!’ “Don Sutton told me to stand in the shade or my tongue might get sunburned.” “I was so tired last night I fell asleep in mid-sentence.” “I have so many splinters from sitting on the bench that if somebody struck a match, I might catch fire.”

On Pitchers and Spitballs:

“There were pitchers who owned me like (Tom) Seaver and Ryan and I’m not ashamed of that, because they were literally unhittable. But, there were others who I hit hard. I do remember a guy named George Culver who was a fine pitcher, but I got a few big timely hits against him that won us a couple games. I also recall that I hit very well against Gaylord Perry. One day I knocked Perry out of the game and he walked past me as I was standing on first and said, ‘That’s the last $%# hit you’ll ever get off me!’ Their catcher Dick Dietz told me that Gaylord was really upset and that I would never get anything to hit from him ever again. He was right, because all he threw to me after that was spitballs. The first time I saw them, I thought they were just really good sliders! The best spitball I ever saw was thrown by Bill Singer, my Dodgers’ teammate. He threw one during Spring Training to Hank Aaron and Aaron was like, ‘Are you serious?’ It came in chest high and by the time he swung at it, it was down around his ankles.”