“That’s a bunch of baloney. We weren’t cursed. We just didn’t have enough good starting pitchers, that’s all. And we never had a relief pitcher at all. The Yankees always had good relief pitchers and that’s how they beat us late in games.” 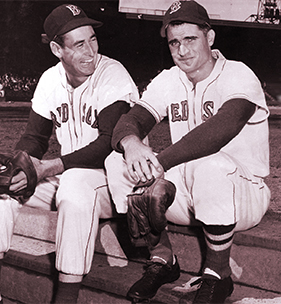 Bobby Doerr (right) in a lighthearted moment with Ted Williams. Not only was Doerr a teammate of Williams in Boston, but also in San Diego with the PCL’s Padres—where he witnessed the Splendid Splinter’s first pro action.

Bobby Doerr played his entire 14-year baseball career for the Boston Red Sox from 1937-1951. The second baseman led the American League in double plays five times; in putouts and fielding percentage four times each, and in assists three times. He held the major league record for career double plays at second base (1,507) until Nellie Fox surpassed it in 1963, and his .980 career fielding percentage was a major league record until Red Schoendienst broke it in 1953. Doerr also ended his career ranking fifth in career games (1,852), putouts (4,928) and total chances (10,852) at second base, and sixth in assists (5,710). He set Red Sox records for career games (1,865), at-bats (7,093), hits (2,042), doubles (381), total bases (3,270) and runs batted in (1,247). All of these team records were later broken by his longtime teammate Ted Williams. Doerr’s 223 home runs were then the third most by a major league second baseman and his 1,247 RBIs rank him fifth in Red Sox history. In 1986, Doerr was inducted in the Hall of Fame. He retired to Oregon, where he lived the rest of his life until his death at age 99 in 2017.

On the Early Years:

“During the Depression days in Los Angeles you played baseball all the time, because that was all you could really do. When I was 16, I joined the Hollywood club in the Coast League and all of the great ballplayers on that team really helped me to get better. Breaking in at a young age was quite an experience for me, that’s for sure. I played second base my whole life except for one year when I played third base at Fremont High School. That was the only time I ever played another position. I didn’t like third base, but they had another kid who was their second baseman, so what could I do? Back in those days, you could quit school to play pro ball, but now you can’t do that. My dad said he’d let me sign if I promised that I would go back to Fremont and get my diploma, which I did during the winter time. After my first spring training with the Red Sox was over, we barnstormed going north and when we got to Boston I went right away to Fenway Park, because I wanted to see it. Joe Cronin took me down onto the field and he told me, ‘This is where you’re going to be playing ball.’ I looked around that place and it was quite a sight. I will never forget that moment, because I can still see it.”

On the Old Veterans Coming to Boston:

“Lefty Grove and (Jimmie) Foxx were on our team and to be honest, Grove was kind of temperamental. He was pretty much a prima donna in a way. But, he was a good pitcher. He had lost his fastball by then, but he could still get them out with a forkball he picked up. It made the fastball look faster by throwing that forkball. Foxx was a nice guy with some amazing power. He hit a few balls that went a mile and there was a rumor that he hit one further than anyone ever in Chicago one day and I believe it.”

“He should really be in the Hall of Fame, no doubt about it any which way you look at it. His best years were lost when he was in the service for three years. If he could have played those years, he would be in the Hall. And even without those years, he should be there. He played a tremendous outfield, hit for average and he got our offense started.’”

“The Red Sox weren’t very good in 1938, but they were just building their team at that time. Ted Williams was still in San Diego when I joined the Red Sox in ’37. I was with the Padres when one day Williams came in for a tryout and signed up. When we first saw him, nobody on the San Diego team knew who he was. He was just standing by the batting cage, this tall skinny kid, and I didn’t know who he was. So, finally the Padres’ manager Frank Shellenback said ‘Let the kid get in and hit a few.’ Of course, the older players there were moaning and groaning, because the kid was going to take up their hitting time, you know. Williams got in there and hit about 7-8 balls and they started asking, who’s this kid? One player said this kid will be signed before the week is out. So, now four days later, we’re getting ready to go to San Francisco, and there’s Ted all excited at the railroad station. And that’s when we knew he had signed with the Red Sox. He created a lot of that stuff with the fans and reporters himself. When he first came up, he had a good relationship with the fans and he would tip his cap to them all the time and they loved it. The fans got on him in the field because it didn’t look like he was hustling, but he sure was. From then on, he stopped tipping his hat and he would openly criticize the fans to the press.”

“He was our catcher and was very intelligent. Cronin kept him on the ballclub so that he could talk to the press—he was very good at giving them information and any club can use a fella like that. He was a spy during World War II. He told me that one time he dressed up in a German uniform and got into one of their big meetings. He was able to get some valuable information for the U.S. military that way. He was definitely a smart, interesting guy.”

On Being the Subject of Trades:

“Only one time. There was a trade rumor in ’48 where my name started coming out in the press. The Red Sox were looking for some pitching. There was some talk about me going to Detroit for one of those pitchers, but it never happened, which was nice. I never wanted to play for another team, because I liked the Boston fans and Fenway was a fun place to play.”

On the Red Sox Curse:

“That’s a bunch of baloney. We weren’t cursed. We just didn’t have enough good starting pitchers, that’s all. And we never had a relief pitcher at all. The Yankees always had good relief pitchers and that’s how they beat us late in games. The one year (1946) we did have good pitching with Tex Hughson, David Ferris, Mickey Harris and Joe Dobson, we won the league by 12 games. The Yankees always had one decent backup player that they could trade for a good veteran who could help them late in the season.”

On his Best Seasons and a Rough Start:

“I didn’t play very well my first year in 1937, because I got hit by a pitch and my confidence was pretty low. For some reason, I didn’t feel like I was good enough to play at that level during that first year with the Red Sox. Then, in ’38, I played much better. My best seasons were 1948 through 1950. Those were my good years. In 1951, I hurt my back so I was slowing down by then. My most memorable home run probably took place at the 1943 All-Star Game, when I hit one after Mort Cooper to win it. Then, there was one game in Cleveland when I hit a home run in the ninth inning to win that game. My home runs weren’t that many to brag about.”

On the Toughtest Pitchers he Faced:

“Lefty Gomez was still with the Yankees when I first came up to Boston and he was tough for me to hit. He was a southpaw and I had a lot of difficulty with him. And Cleveland always had real good pitching, with Feller, Lemon, Garcia and those guys. And Detroit had good pitching, with Newhouser, Trout and Trucks. Of all the cities I played in, I preferred Detroit. I liked the city, because it was a nice town and they had a nice ballpark. Cleveland had the nicest infield to play on, because they had the best groundskeepers in the game.”

On the Lost Art of Bunting:

“I learned how to bunt in the Pacific Coast League. I could lay them down the third base line and get a base hit almost every time. When I broke in at Hollywood, Fred Haney had just come down from the majors and he showed me how bunting would help my hitting and it did help. The third basemen started looking for the bunt when I was up, so they’d creep in. Then, I’d swing away and get hits that way.”

When Turning Double Plays Was his Bread and Butter:

“I loved fielding and I might have won a couple Golden Gloves, but they didn’t have them back then. I worked all the time at turning double plays and I had good shortstops to work with and that made it a lot easier. When I started with the Red Sox, it was Joe Cronin. And then Johnny Pesky came up and when Joe McCarthy came over in 1948, he moved Pesky to third base and put Vern Stephens in there at shortstop, and he was a great shortstop. It’s important for the shortstop to get the ball to you in time, so that you don’t get taken out by the runner.  I always liked it when they gave me the ball nice and high, so that I didn’t have to reach over. That way, you could feed it to the first baseman easily. One time in the Coast League, this runner took me out at second and sent me clear over to shortstop. He was an ex-football player and he didn’t slide, he just come in and hit me. I learned then how to fall with them when they hit me, and that’s the main reason why I never got hurt.”

“That was quite a thrill and I did pretty well. I was in a slump at the end of the season there and then I just got hot during the Series. I was tired I guess, toward the last month of that season. You get fatigued and your feet slow down and your bat slows down. But, during that last week, I got my second wind and pulled out of a little rut there. I got in a groove and felt pretty good. I hit a home run. I believe we lost that Series because we had too much time to think about it between the time we won the league title and the start of the Series. We got a little lax there and just couldn’t find it again, and that’s what happened. Baseball is all about momentum and we lost ours right there. Williams did not have a great Series, because he came down with a little flu, although he never mentioned it to anyone. He was not strong for the Series. It was a good team in ’46, but we just didn’t get it done.”