“Everyone seems to want to know about Game Five. Johnny Bench came up in the ninth inning of that game and lined a foul ball that I swore I wouldn’t be able to reach, but somehow I caught it.” 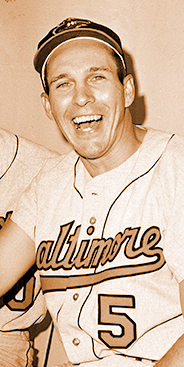 Brooks Robinson played his entire 23-year major league career for the Baltimore Orioles (1955–1977). He batted and threw right-handed, though he was a natural left-hander. Nicknamed “The Human Vacuum Cleaner” or “Mr. Hoover”, he is considered one of the greatest defensive third basemen in major league history. He won 16 consecutive Gold Glove Awards during his career, tied with pitcher Jim Kaat for the second most all-time for any player at any position. Robinson was elected to the Baseball Hall of Fame in 1983.

On Signing with the Orioles (But Not as a Bonus Baby):

“I signed with Baltimore as a second baseman at age 18 and they gave me a $4,000 bonus at the time. I wasn’t one of those “bonus babies” that got $30,000, that’s for sure. I had a great glove, but I still had a lot left to learn, but the Orioles believed in me, so that gave me some confidence. I played at York, Pennsylvania, Class B, and I hit around .330, so I was very happy with that. Being from Little Rock, Arkansas, I had never played with black players before being in the minors. Some people asked me back then, “Do I have any black friends,” and I had to say no. In Arkansas, they segregated the schools back then. But, to be honest—I never really thought about it when I played with black players in the minors or with the Orioles. We all played together just fine without any issues—it was easy.”

“During my early years with the Orioles, Richards made a lot of deals and players were coming and going, so we didn’t get a chance to create any team chemistry. He knew more about baseball than anyone I ever knew. He was a former catcher and he knew every aspect of the game—fielding, hitting. pitching, running and even the mental side. He was a quiet guy and very direct—he did not try to make small talk. He was one of the biggest influences I had in baseball and I still think of him often.”

On Fielding Third Base:

“We had some great instructors with the Orioles and they worked with me all the time to become a better fielder. My goal was to be aggressive and not wait for the ball. I was always working to get a jump on the ball by anticipating where it was headed. I was blessed with decent hand-eye coordination, and seemed to have a sense where the ball was going to be hit, which was helpful. I never altered my fielding style, which was moving around—I never wanted to be stationary, that’s for sure. I learned a ton from George Kell. I admired him when I was a youngster, so playing with him for the Orioles in 1956 was a big deal and a great opportunity for me to learn from one of the best.”

“It was Paul Richards’ last year and probably the best squad he had with the Orioles. I played 163 games and it was a great season. We won 95 games, but the Yankees and the Tigers won more than 100 games each. The Yankees, with Mantle and Maris and the home run race, got all of the attention that year and we pretty much were forgotten, but that was a very good Orioles team and if you look at the records, we played those Yankees tough.” (The Orioles were 9-9 against the Yankees in 1961; all other American League teams posted a losing record in head-to-head contests against New York.)

“I hit more than .300 for the first time, which was satisfying. This team finished eight games below .500, but we were starting to get the right young players in the right spots. Boog Powell broke in that year. Twnety years old, six-foot-four and 240 pounds, a big strong guy who was going to eventually be a star. Dave McNally was only 19 when he pitched a shutout for us in his first major league game and he was a terrific pitcher and a great teammate. So, we were getting better, even though it did not show it with our record that season.”

On Living in Baltimore:

“At first, I liked living in Little Rock, but my wife wasn’t crazy about Arkansas, let’s put it that way. She is from Canada and didn’t like it there, so we decided to move to Baltimore year round. Being on the road and being married is never easy, but my wife understood, which made it a little easier. I liked Baltimore, but it was more of a football town than a baseball town back then. Oh, they loved their Colts, that’s for sure. Johnny Unitas had a restaurant and I would eat there all the time and of course—we had our own place called Eddie and Brooks Robinson’s Gorsuch House near the stadium and those guys ate there too.”

“We could see that we were getting better and we thought—man, maybe we can finally beat these guys! We really should have beaten them out that year, but our big first baseman Boog Powell got injured during the stretch and that was that. But it was an exciting season, with the Yankees, the White Sox and our squad battling it out right up until the final week.”

“For some reason, we weren’t that worried about the heavily favored Los Angeles Dodgers, even though they had won it all the last two of three years. But, of course, we never imagined that we would sweep them in four games. In Game One, Frank Robinson and I hit homers in the first inning and we just rolled on from there. Our starting pitchers were incredible, with three straight complete-game shutouts. You dream about signing a big league contract and then you start dreaming about getting to the majors, and then once you achieve that, you dream about getting to the World Series. I remember after winning Game Four, I thought—now if you never win anything else again, at least you’ve done this.”

“I guess you might say that the ’70 Series was the biggest moment of my career as I look back at it. I had a lot of big ones, but that series was probably the highest point. Everyone seems to want to know about Game Five. Johnny Bench came up in the ninth inning of that game and lined a foul ball that I swore I wouldn’t be able to reach, but somehow I caught it. There were a lot of other exciting plays in that series, but people for some reason want to talk about that particular catch!”