“I roomed with Joe Collins, and we would police the younger kids; if they got out of line, we told them—you’re messing with our money…if they persisted, we’d tell them, you better get rid of this guy, because he’s not a Yankee.” 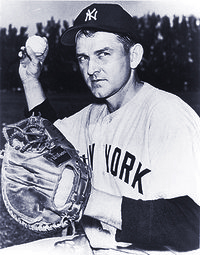 At first glance, Charlie Silvera seemed to have it made, being called up to the New York Yankees in the midst of their mid-20th Century glory. But the promising catcher had the tough luck of being called up just as Yogi Berra was emerging as a star behind the plate. Silvera would essentially become a career backup for Berra, appearing in 201 games during his nine years in New York, but the upside was that he won six championship rings as a Yankee and collected an awful lot of Series cash earnings. His most active year on the field would come in 1949, batting .315 playing in a career-high 58 games. Silvera went on to coach and scout for a variety of major league clubs, and resided in the beautiful hills of Millbrae just south of his city of birth, San Francisco, until his passing in 2019 at the age of 94.

On his relationship with Yogi Berra:

“In 1948, I was called up late in the season because Gus Niarhos got hurt. Yogi had been playing the outfield that season, so they brought him in, made him the number one catcher, and I became his backup. Yogi had natural talent, and Bill Dickey refined him. In 1950, I didn’t get to bat until June 17. We were the best of friends. We ran around together, we got along great.”

“A lot of them were obviously made up, mostly by reporters, but a lot of them he said on his own. A few of them happened when I was in his company and they never got recorded. One time, we were going to go, on an off-day, to a dinner to speak. The Yankee PR guy came by and asked, ‘Yogi, do you want to go to this affair? You know, you have an off day. Charlie’s gonna go.’ So Yogi said, ‘What are they gonna give us?’ And I told him, ‘Well, I think they’re gonna give us a .20 Gauge Remington.’ And Yogi, said, ‘Great! I’ve always wanted a camera!’”

On Billy Martin and Yankee Carousing:

“They got rid of Billy because they thought he was a bad influence on Mantle—all Mantle did was win the Triple Crown. They also blamed Billy for the incident at the Copa. I’d have been there, but we left early. Mantle and Billy, they roomed together, they had their fun. But, the older guys kind of policed the younger guys, you know, I was considered a veteran by then. I roomed with Joe Collins, and we would police the younger kids; if they got out of line, we told them—you’re messing with our money, and you don’t do that. If they persisted, we’d tell them, you better get rid of this guy, because he’s not a Yankee.

We made a pact. One day, late in both our careers, Billy and I were sitting on the Yankee bench, neither of us were playing, and Billy told me that if he ever got a job managing the Oakland Oaks, you’ll be my coach. And I told him, ‘If I ever manage the San Francisco Seals, you’ll be my coach.’ And by God, when he got the job managing with Minnesota, he called us. Billy was a blue collar fan’s type of guy. The fans loved him because he fought millionaires, but that was the worst thing to do. You don’t fight millionaires. You don’t fight owners. But, he would get a little upset at times. When I could see he was going to get into something, I’d say, listen, I can’t run and I can’t fight, so be careful tonight. And we’d go somewhere, and someone would get in front on him and he’d want to fight ‘em. He never backed down from anybody. Everybody knew he wasn’t afraid of anybody.”

“Joe alienated a lot of people because he wouldn’t kiss their ass, especially people from the old neighborhood. But, that was Joe.”