“I made the All-Star Game (in 1964) and that meant a lot, but losing Kenny (Hubbs) was a huge setback and I still think about it all the time. Without that tragedy, I think we could have won it all that year.” 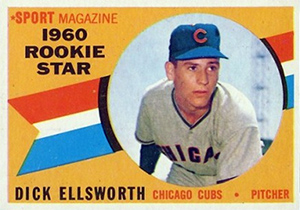 Dick Ellsworth was a dependable starter for the Chicago Cubs and four other major league teams from 1960 through 1971. He is one of the few pitchers in major league history to follow a 20-loss season with a 20-victory campaign. Ellsworth was signed by the Cubs in 1958 out of Fresno High School, where his teammates included future major league pitcher Jim Maloney. Ellsworth made the big league club in 1960 and, through 1966, averaged 34 starts and 234 innings per season for Chicago. Although his ERA for that period was a respectable 3.68, his won-loss record for less-than-respectable Cubs teams was only 84-109. After going 9-20 in 1962, Ellsworth posted a 22-10 record for 1963. His 2.11 ERA that season was second in the league only to the 1.88 for Sandy Koufax, but he would never match that success again as a Cubs starter. Ellsworth won 14 games in both 1964 and 1965, and led the National League in losses in 1966 (8-20). Ellsworth was then traded to Philadelphia and later to the Boston Red Sox in 1968 and the Cleveland Indians in 1969; he retired in 1971 after a short stay with the Milwaukee Brewers.

“Now that was a great team, maybe one of the best high school teams ever. During my senior year, my record was 15-0 and I probably wasn’t even the best pitcher we had on that squad. Jim Maloney was our other top starting pitcher and as you know he later played with the Reds. We also had Pat Corrales. Of course later, Fresno High had players like Tom Seaver, Dick Selma and Bobby Jones and for many years it has been a baseball powerhouse. We had big-time scouts at our games all the time, including Dolph Camilli and Carl Hubbell. Before I graduated I received at least one Christmas greeting from a scout from pretty much every major league club.”

On his Fast Ascent to the Big Leagues:

“Three days after graduating from high school, I was pitching on the mound at Comiskey Park in Chicago. I was the Cubs’ $60,000 bonus baby, so the pitching coach Freddy Fitzsimmons decided to have me throw a few innings during the annual charity game where they play the White Sox. Instead of just throwing 1-to-2 innings, they let me go the distance and I ended up winning that game. It was the highlight of my young professional career and I do believe it helped me to eventually get into the major leagues with that game.”

On a Tough Married Life:

“I was never home and we were young and had a kid, so it wasn’t easy. I was selfish in a way, because I focused almost exclusively on playing ball and left my wife alone a lot. I wasn’t a delight to be around, to be honest, especially after a loss. My wife would often remind me of what a miserable person I was to be in the same room with after a defeat. I never figured out how to handle those losses and I know it affected her. Thank God we survived, but being a baseball player is always tough on a marriage.”

On the Cubs’ Revolving Coaches:

“In 1961, we started this crazy system where they would rotate managers. Harry Craft, Lou Klein, Tappe and Himsl and a few others I can remember got to take turns and it was a complete disaster. The players thought the front office was losing it, because there was no leadership in the Cubs clubhouse. They told us that it would work because all of these coaches were going to contribute and make it a success, but it ended up being counterproductive. I wasn’t getting much help that season and I ended up 10-11, but with better direction I know I could have done better.”

On Going Back to the Old System:

“They abandoned the rotating coaches plan and gave Bob Kennedy the manager’s job in 1963. We had a good team that year, with a solid rotation—Larry Jackson, Glen Hobbie, Bob Buhl and a very good bullpen led by Lindy McDaniel and Don Elston. We had some young, up-and-coming players too, like Lou Brock and Billy Williams, and of course, we had Ernie Banks and Ron Santo. We felt we could beat anybody and the entire team got better and better during the season, which was great to see. We were a relaxed group and we played a lot of cards—gin and bridge. Jackson, Elston and Landrum played all the time and everyone joined in so it built a good team attitude, unless of course someone lost a lot of money.”

“We were strong and we knew it—what a team! But, before the season began, we lost our second baseman Kenny Hubbs in a plane crash in Utah. It deflated us, because Kenny was really loved and an important member of our team. So we started out poorly and before we knew it we were buried deep in eighth place. I made the All-Star Game that year and that meant a lot, but losing Kenny was a huge setback and I still think about it all the time. Without that tragedy, I think we could have won it all that year. Santo, Williams and Banks had good years and Jackson led the league in victories, but this cloud hung over that team all season long and it showed.”