“They paid me 10 dollars to pitch and expected me to finish the game, so I kept throwing even though I was in pain and ended up seriously injuring my arm. I found out by dropping down to throw sidearm, the pain wasn’t quite as bad and I started to get more movement out of the ball that way.” 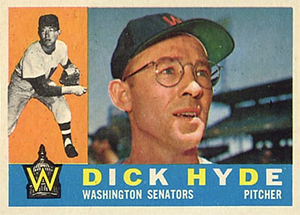 Dick Hyde, a bespectacled, submarine-style-throwing right-hander, signed with the Washington Senators in 1949 out of the University of Illinois. After several minor league seasons interrupted by the military in 1951-52 during the Korean War, Hyde pitched for the Washington Senators from 1957-60 and the Baltimore Orioles in 1961. His biggest year came in 1958 when his won-lost record was 10-3 with 19 saves and a minuscule 1.75 ERA. As a result, he finished 12th in the AL MVP voting that year. His career record was 17-14 with a 3.56 ERA and 25 saves.

On Becoming a Submariner:

“I hurt my arm pitching in 1952 in the Army in a semipro game in Augusta, Georgia. They paid me 10 dollars to pitch and expected me to finish the game, so I kept throwing even though I was in pain and ended up seriously injuring my arm. I found out by dropping down to throw sidearm, the pain wasn’t quite as bad and I started to get more movement out of the ball that way. After getting out of the Army and going back into the minor leagues, I kept throwing down there and basically taught myself how to do it through the minors and into the majors. Looking back, I was influenced by watching Ewell Blackwell pitch in an All-Star game in Chicago and felt he had some similarities in common with my motion.”

On his Pitching Plan:

“With right-handed hitters, I had success trying to sink the ball in off of the plate. I was always trying to stay down in the bottom half of the strike zone on righties. Against lefties, I would try to throw my curveball up and in early in the count and then sink it away late in the count. I struck out Ted Williams twice on changeups and both times he shook his head and stared me down. I felt I had an advantage over right-handed hitters and could throw harder at that angle. I also believed that I had an advantage because the hitters were not familiar with my delivery. One day, Jimmy Piersall yelled at me to stand on my head and throw the ball right and I should have knocked him down, but I didn’t because the man was literally crazy! If I hadn’t figured out a way to throw sidearm or submarine, I seriously doubt that I would have ever pitched in the majors.”

On Playing the Damn Yankees:

“Yes, they did a Broadway show about the fact that we rarely beat the Yankees, which could be frustrating, that’s for sure. But you can’t say that we didn’t have heart. I remember the first time I walked out on the field at Yankee Stadium, and it was intimidating to say the least. It was a huge place and before you knew it, we were losing to them. And once they got ahead, our chances of coming back were nearly impossible.”

“We had a good team, but we were not a great team and we had some big holes that teams like the Yankees could take advantage of. Actually, we did play well against New York that year and I remember we took five out of six from them during a stretch in September. We didn’t have enough power at the plate, with really only Roy Sievers hitting home runs (39). We had some good starting pitchers, like Pedro Ramos and Camilo Pascual, but they didn’t get a lot of run support half the time.”

On the Submarine Style:

“My advice to pitchers today would be to keep their normal arm angle as long as they possibly can. But if they start getting hit and losing velocity, why not try dropping down? I had only three pitches—a fastball, curve and change and everything naturally sunk because of my arm motion. Johnny Sain showed me the correct arm angle to get the best results with my submarine delivery and after that, I did it that way and it worked well.”

On his Best Year:

“In 1958, I was at my peak as a professional player and when I look back on it, I have to be proud. I won 10 games and lost only three and my ERA was under two, as I recall. I think when they brought me in the game, the other team would have a little trouble with me. I was totally different with my delivery and the way the ball moved, so it took them a while to adapt. I was lucky because I came into a lot of games and held them long enough for us to catch up, which explains the 10 victories.”