“Mays made his famous catch in Game One and then in Game Two we lost a close game against Johnny Antonelli, and by that time we were done. The last two games were pretty much finished before we even played them, because we were mentally beat at that point.” 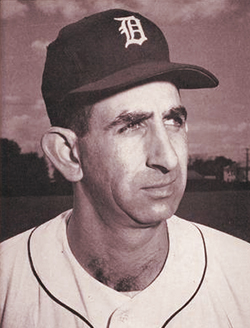 Don Mossi pitched for the Cleveland Indians, Detroit Tigers, Chicago White Sox and Kansas City Athletics from 1954-1965. He was a left-handed control pitcher whose strikeout-to-walk ratio was regularly among the league leaders (he led the American League in 1961) and retired with 101 wins, 50 saves, and a career 3.43 earned run average.

“I went to Spring Training and I was playing well, much better than I expected. I was competing against five-to-six other rookies for one spot on the roster. One day I asked Mel Harder, the team’s pitching coach, what my chances were of going to the big leagues and he said, ‘stick around.’ So, when they told me I made the team that was one of the highlights of my life. They put me in the bullpen and I got into a lot of games. It was different for me, because I had always been a starter, but I adapted to it pretty quick. The starting pitchers on that Cleveland team were the best in the league, with Bob Lemon, Early Wynn, Bob Feller, Hal Newhouser and Mike Garcia, so even if I wanted to start, it would have been difficult with that staff.”

“I appeared in three games, pitched four scoreless innings and struck out one, so I tell people my World Series ERA is zero. We never even got going in that series. We looked up and realized we just got swept. Mays made his famous catch in Game One and then in Game Two we lost a close game against Johnny Antonelli, and by that time we were done. The last two games were pretty much finished before we even played them, because we were mentally beat at that point.”

“I continued to play well out of the bullpen and really started to enjoy the role. In 1957, Ray Narleski, who was also my roommate, moved to the starting rotation. I finished the season with a record of 11–10 and an ERA of 4.13 on a team that was inconsistent all season. I made it to the All-Star Game that season and it was a thrill. I came into the the game in the bottom of the ninth with two runners on base and we were leading 6-4. I struck out Eddie Mathews and then Ernie Banks hit a single, which cut the lead to 6-5. But then Gus Bell was thrown out at third base for the second out and Bob Grim came in and got the final out. In 1958, I was traded to the Detroit Tigers along with Narleski and Ossie Alvarez, for Billy Martin and Al Cicotte. At first I was a little upset, but then I realized that I could be a starter again. I went 17–9 with a 3.36 ERA with the Tigers in 1959 and then the next year I went 9–8 on a team that finished below .500.”

On his Best Year as a Starter:

“In 1961 I went 15–7 on a Tigers club that won 101 wins, but finished eight games behind the Yankees. That was probably the best team I ever played for, with hitters like Norm Cash, Rocky Colavito and Al Kaline. Our pitching staff was led by Frank Lary with Jim Bunning and Paul Foytach having a great season—what a terrific team. After that, my baseball career kind of went off the rails. I hurt my throwing arm, and my last two years with the Tigers were lousy. Once I injured my arm, I was never the same and I knew that I had to go back into the bullpen if I wanted to stay in the big leagues.”

On his Final Two Years in the Majors:

“In 1964, I got traded to the White Sox and then finished my career in 1965 with the Kansas City Athletics. Playing for the A’s was interesting, that’s for sure. The owner Charlie Finley was starting to build up their minor system and we had a lot of young promising guys on that team, like Bert Campaneris, Ken Harrelson and Catfish Hunter, but we still lost 100 games. I was 36 years old, but I wasn’t the oldest player on that team, because Satchel Paige was 58, can you believe that?”