“Bill Veeck decided that if he could play a midget, and get him up at the proper time to walk wih the bases loaded or put the tying run on—whatever the case may be—we could win a game here and there.” 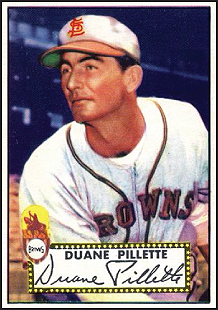 Duane Pillette had the fortune of beginning his major league career with the 1949 New York Yankees—who won the first of five straight World Series titles—and the misfortune of being traded in 1950 to the St. Louis Browns, who were suffering through their final years in Missouri before moving out to Baltimore. But with master promoter Bill Veeck in charge at St. Louis, it could never be argued that life was dull. Pillette recounts playing for Veeck and witnessing his most memorable stunt: The one and only appearance at the plate of 3’7″ Eddie Gaedel.

On the Eddie Gaedel Stunt:

“None of the players knew anything about the midget until the day of the game. We didn’t know about Eddie Gaedel at all. We were playing a doubleheader that day against Detroit, and I started the second game. The surprising part about it was, before the ball game, Bill Veeck, the owner of the St. Louis Browns, decided to do something different. You know he was a clown, really—a great guy, and a wonderful man to play for—but he was a showman.

And Veeck thought that if we could score an average of three runs or better, we could win some ball games in St. Louis. Because at that time the Browns had a pretty bad ball club, at least offensively. But, we had pretty good pitching. So, he decided that if he could play a midget, and get him up at the proper time to walk with the bases loaded or put the tying run on—whatever the case may be—we could win a game here and there.

So, anyhow, the Browns threw this big shindig for some reason or another, and they popped Eddie out of a birthday cake. And Bill Veeck put on a real show. He had chimpanzees and everything. In fact, they took a picture of me with a chimp sitting on my lap and years later I kidded my son about it. I told him, “Look at this photo, son. This is what you looked like when you were a baby, but then we had an operation.”

On Being the Pitcher When Gaedel Batted:

Yes, I pitched and actually lost that game in which Eddie batted. Eddie was quite a little guy. I guess he was a drinker. He had a problem, whatever. But, when you’re a midget, it’s gotta be tough and, you know, what are you going to do in life? I guess with that one appearance he probably was the highest paid ball player in the history of baseball for a long time.

But, we had no idea that he was going to play that day. We didn’t think he was really ever going to play. We figured he was just part of Veeck’s parade of gimmicks.”

On a Fan Becoming Manager for a Day:

“Another crazy stunt that Veeck pulled was when he made some fan manager for a day. He thought, okay—we can’t do any worse than what we’ve been doing. Marty Marion was our manager at the time and although Veeck appreciated what he did, Marty was having trouble with some of the ball players on the club. Including me, for whatever reason.

With me, Marion always wanted to take me out in the late innings. If I ever had any trouble in the ball game, it was usually at the start of the game. I got stronger as I went along. And then he’d pull me. Marty and I just had some differences, although he was a wonderful man and a great ball player.

So, Veeck got this gimmick going about fan appreciation. And I don’t remember the gentleman’s name or anything, but he did manage for a day. I’m not sure if we won or lost, but that guy had a helluva good time, I know that.”