“Willie and I never had a conversation that lasted more than a minute. Mays has always been kind of a loner, in my opinion and I can understand it, actually. The public is always pulling and tugging at him for one thing or another, and I don’t care who you are—that has to get old after awhile.” 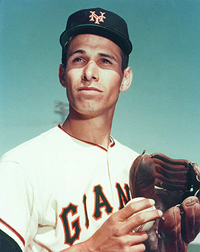 Ed Bressoud was a dependable, very slick fielding shortstop whose arrival in 1956 allowed the New York Giants to send Alvin Dark to the St. Louis Cardinals in a deal for Red Schoendienst. He spent just two of his six Giant seasons as their regular shortstop, but was successful in three years with the Boston Red Sox because he adapted his swing to Fenway’s left field wall, hitting 20 home runs for the Red Sox in 1963. Made expendable by Rico Petrocelli’s emergence in 1965, Bressoud concluded his career against the Red Sox as a utility man for the Cardinals in the 1967 World Series.

“It was a wonderful experience for me. Luis Aparicio couldn’t make it, so I went instead. And I didn’t play, which has always irritated me—particularly after seeing that All-Star Game a few seasons ago when they ran out of players. The experience of that year just brought to mind the pain that I felt in that All-Star Game, because the manager for the AL, I forget his name—the White Sox manager (Al Lopez)—he played Jim Fregosi through the whole game, which he did with several players. There were a lot of players like me that didn’t get into that particular ballgame. But, I think at that time, the American League had been beaten by the National League for something like 12 out of 14 times, and I think the manager decided that he was going to stay with his best lineup and try to win that game. And I think that’s fine, even though it was disheartening that I didn’t get a chance to participate.” (In that game, held at Shea Stadium, The National League won again, 7-4, on a three-run home run in the bottom of the ninth by Philadelphia outfielder Johnny Callison.)

On Playing in the Polo Grounds with the New York Giants:

“With guys like Willie Mays, Monte Irvin, Bobby Thomson, Don Mueller, Johnny Antonelli—that club was absolutely loaded with talent. The only problem was that the National League was a powerhouse full of great clubs back then. Milwaukee, Brooklyn, Pittsburgh—those were some good teams. We didn’t play particularly well that year and then in 1958 the team left New York and moved to San Francisco. I remember seeing signs from the fans that said ‘Please Don’t Go.’ I never thought we’d move to the West Coast, but we did. It was kind of sad.”

On his Relationship with Willie Mays:

“Willie and I never had a conversation that lasted more than a minute. Mays has always been kind of a loner, in my opinion and I can understand it, actually. The public is always pulling and tugging at him for one thing or another, and I don’t care who you are—that has to get old after awhile. So, he kind of stayed to himself most of the time. I did get the privilege of playing shortstop in front of him, though, which made my job a lot easier. He played such a shallow center field that I didn’t have to worry about going back for short fly balls or pop-ups. He also caught a lot of line drives that would have been base hits against other teams. Batters rarely hit it over his head. I think I saw it happen maybe once or twice. He was the best player I ever saw or played with, no doubt about it.”

About Contract Negotiations and Agents:

“No one had agents back then. You were offered a contract and you either took it or you walked, basically. We were grateful to just be playing, to be honest. The alternative was a nine-to-five job, so playing a game and getting paid pretty decently for it was pretty favorable in comparison. The first time I heard of any player hiring an agent was when Don Drysdale and Sandy Koufax got together and hired an agent and then held out with the Dodgers. I think they wanted something like $125,000 a year, something like that. In 1964, I was seventh in the league in hitting and made the All-Star Game, and I was very happy with the season I had. They paid me $27,000 the previous year and then sent me the same contract for 1965. I sent it back and they sent it back again. It traveled back and forth through the mail several times before they generously agreed to give me a $1,000 raise. But, that’s the way things were back then. The owners were in control and they knew it, so what could you do?”