“We were just enthralled looking at it, and it stayed there silently for about ten or 15 seconds…right above the pitcher’s mound. And then all of a sudden, it went out of sight in about three seconds. With no sound, just pfffft…just like that!” 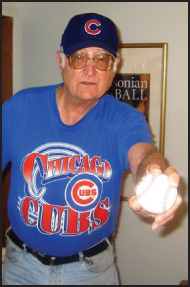 Ed Mayer played for the Chicago Cubs from 1957-58. A San Francisco native and a Lowell High School graduate, he won the MVP award in a high-school all-star game played at Seals Stadium and received the trophy from none other than Babe Ruth himself. After playing for the University of California, Mayer played in the minors with the Cardinals, Red Sox and Cubs, with stops in C, B, A, AA, AAA, Mexico and Cuba before making it to the major leagues. Mayer made his big-league pitching debut against the New York Giants and gave up two home runs—one to Willie Mays and the other to Hank Sauer. They were the only dingers he would ever surrender. After his baseball career came to and end, Mayer worked for 25 years as a teacher. In retirement in San Anselmo, California, he enjoyed playing the piano, traveling throughout the world and designing crossword puzzles; he passed away in 2015.

On a UFO Sighting in the Minor Leagues:

“This is a great incident, and don’t think I’m crazy, because I am not crazy, believe me, and it’s been verified by so many people. We were in Class B ball, or C ball, in Georgia in either 1954 or 1955, I forget which. And it’s a night game, and I’m in the third base dugout. And we’re just watching a guy on the other team warming up. And, all of a sudden, this round disc comes over the stadium – silent, about 200 feet up maybe, spinning slowly, red, white and blue lights. And I said to the guy next to me—do you see what I see? He said, “Yeah! Holy cow! What is it?”

We were just enthralled looking at it, and it stayed there silently for about 10 or 15 seconds, looking down, obviously—because it was right above the pitcher’s mound. And then all of a sudden, it went out of sight in about three seconds. With no sound, just pfffft…just like that! And right now today, we don’t have the capability of doing what that thing did. That was a UFO. It was absolutely unbelievable. In fact, after it happened, I even went over to the left field corner and asked somebody, “Did you see that?” and they said “Yeah.” Then, I went over to the right field corner and asked somebody else, and they said, “Yeah.” It was for sure. So, I am a believer now. That made me a believer.”

On Giving up a Home Run to Willie Mays:

“I gave up just two home runs in my career: To Willie Mays and Hank Sauer, both in my very first game against the Giants. And when they hit them, I said to myself—that’s it; nobody else is going to hit a home run off me. And nobody did. I remember the Mays home run like it was yesterday. It was the first inning and I got the first two guys out and Mays stepped up to the plate. I said to myself, I know who Willie Mays is, I’ve heard of him, but so what? So, I threw the ball, and he hit a line drive which I thought would either be caught by the center fielder or hit the wall, but it went straight up into the stands—a rope. The guy’s a great hitter. The best hitter I ever played against, that’s for sure. Frank Robinson, Stan Musial—they were good. But, Mays is the best I ever saw.”

On Racism in the Minor Leagues:

“We were going through Georgia on a bus, and we pulled over to get some gas. I was in the low minors, A-ball. So the whole team gets out of the bus, and we walk up to a Coke machine. We line up, and everyone was getting sodas, and Earl Wilson, one of our black players, was in line right in front of me, just waiting his turn. He went to put his nickel in—it was a nickel back then—and the gas station attendant came out and pointed a gun at Wilson, and said, “No nigger is going to buy a Coke out of my machine.” And Wilson wasn’t used to this kind of treatment, because he was from San Diego. And I sure wasn’t used to it being from San Francisco. I mean, we had black players in high school and we never thought about it. It was never a big deal. And so I grabbed Wilson by the shoulders, and I turned him around and pushed him back on that bus. I told him that I would buy him the Coke. And I bought two Cokes and gave him one.

The sad thing is that that guy with the rifle probably could have gotten away with shooting him and then said that he had done something to him, because that’s what was going on down in the South back then. I saw racism a lot in baseball, even against me, because I’m Jewish. When I was at spring training with the Cubs, I was told that I couldn’t go into a place called the Olympic Club in Phoenix, because I was Jewish. They told me I couldn’t go in there. In AAA, when I was with Omaha in 1956, a fan yelled a bunch of racist stuff at me while I was pitching, calling me “Jew Boy” and things like that.”

When the Game was Pure:

“I played in an era when nobody was taking anything. I never saw one pill or anything. Never saw anyone ever taking any pills. The players looked normal back then. You look at Ernie Banks. You look at Stan Musial—any of the old guys—they looked normal. Their arms and their bodies looked normal. Not all beefed up like they are today, like Sammy Sosa. There’s no doubt these guys are doing something. It’s bad for baseball, because it’s illegal, it’s no good, it’s not fair and I believe that when (Barry) Bonds breaks the record it will be tainted. It’s a shame. No one was cheating when I played. I never looked at anyone back then and thought, ‘Wow, he looks different.’”e were others who I hit hard. I do remember a guy named George Culver who was a fine pitcher, but I got a few big timely hits against him that won us a couple games. I also recall that I hit very well against Gaylord Perry. One day I knocked Perry out of the game and he walked past me as I was standing on first and said, ‘That’s the last $%# hit you’ll ever get off me!’ Their catcher Dick Dietz told me that Gaylord was really upset and that I would never get anything to hit from him ever again. He was right, because all he threw to me after that was spitballs. The first time I saw them, I thought they were just really good sliders! The best spitball I ever saw was thrown by Bill Singer, my Dodgers’ teammate. He threw one during Spring Training to Hank Aaron and Aaron was like, ‘Are you serious?’ It came in chest high and by the time he swung at it, it was down around his ankles.”