“I got along real well with Bob Feller on that team, even though a lot of other people didn’t like the man. I had no problems with him and he sure could throw a baseball. Feller was very confident of his ability and some folks thought he was cocky, but he had that fastball that made grown men look like babies up there.” 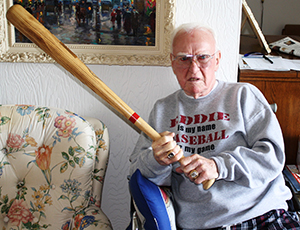 Even in his waning days, Eddie Bockman still showed the fire for the game he loved.

Eddie Bockman was a third baseman who played from 1946-49 for the New York Yankees (1946), Cleveland Indians (1947) and Pittsburgh Pirates (1948-49). He missed 1943-46 due to military service during World War II. He joined the Yankees in September 1946, and later spent parts of the next three years with the Indians and Pirates. Following his playing career, he became a minor league player-manager for the Albuquerque Dukes (1955), Visalia Cubs (1956) and Amarillo Gold Sox (1957-58). He later scouted for the Philadelphia Phillies, where he was credited for signing Bob Boone, Larry Bowa, Joe Charboneau, Buck Martinez, Ricky Jordan, Randy Lerch, Dick Ruthven, John Vukovich and Bob Walk, among others. In 1992, after more than 30 years with the Phillies, he became a scout for the newly created Florida Marlins. Bockman died in Millbrae, California at the age of 91 in 2011.

When I interviewed Bockman, he had only four months left to live, but he was very articulate and we covered a lot of topics. A bunch of people came through his living room that day—fellow scouts and players who played for him in the minor leagues. He had a white board in his kitchen that said the date and the name of his caregiver for the day. I looked at that and thought: Wow, I’m in my 50s and, one day, I’ll need one of those too!

On Breaking into the Big Leagues:

“Things were tough back then, especially for rookies trying to make the big team from the minor leagues. No one was going to help any of the young players, and definitely not the veteran players. If you had a friend on the team, maybe you might get a little support from him, but the veterans looked at you as a threat. So, you had to prove yourself and that was fairly easy for me, because I wasn’t afraid of working hard. Some of the older players would try to intimidate me, by running me out of the cage during batting practice or tying my shoelaces together, but they didn’t faze me at all. My parents taught me to have thick skin and so I didn’t get rattled by these guys. I went to a large tryout for the Angels, and out of 200 kids, two of us got signed. So, I went into their minor system and played pretty well, I thought. But, for some reason, they released me halfway through the season. Anyway, the Yankees came knocking on my door and asked me was I interested in playing for them? I said sure. I was an 18-year-old kid, who wouldn’t want to play for the beloved Yankees?”

On his Brief Time as a Yankee:

“As a young kid I was obviously elated. To get into those pinstripes and then walk out onto the field at Yankee Stadium for the first time is something that I will never forget. I can still remember the smell of the hot dogs and the buzz of the crowd. The Yankees had won three straight championships, so they were as close to unbeatable as they could be. I got to play with all of them, including (Joe) DiMaggio, of course, and that’s probably the number one thrill of my professional baseball career. DiMaggio didn’t speak to me or even look at me, but I didn’t take it personally, because he didn’t talk to anybody anyway. He just went about his business and he did pretty damn well. Yogi Berra and I joined the team the same day. I was gone for Kansas City pretty quick, but Yogi stuck on with New York and had a pretty decent career there (laughs).”

“They had just won it all the year before, so when I went to spring training I didn’t think I had any chance to make the team. (Editor’s note: The Indians actually won it all in 1948, a year after Bockman’s one season in Cleveland.) They were loaded with talent with some incredible pitching. Their manager Lou Boudreau is gone now, so I guess I can tell you that I don‘t think he liked me. I don’t know why, but he just didn’t care for me. He was what I would call a ‘cold shoulder’ type of manager. He played shortstop and managed the team, which is difficult. I tried to do it in the minor leagues, so I know it’s not easy. I know Frank Robinson and Pete Rose did it, but you don’t see anyone trying it anymore. The main problem is that you miss a lot of the game being out there playing. And it’s also tough being a teammate and a manager. It’s strange for everyone, including the players, coaches, front office people and even the fans.

I remember I hit my first home run in the majors in Cleveland off of Allie Reynolds, the guy I was traded for. I got along real well with Bob Feller on that team, even though a lot of other people didn’t like the man. I had no problems with him and he sure could throw a baseball. Feller was very confident of his ability and some folks thought he was cocky, but he had that fastball that made grown men look like babies up there. To be a pitcher in the majors, you have to be a little arrogant anyway, just to be able to get up there day after day and face the best hitters in this great game.”

On the Pacific Coast League:

“It was basically a step down from the major leagues as far as talent was concerned. The pitchers in the PCL were good, but they didn’t have the velocity or repertoire of pitchers like they did in the big leagues. The runners were faster and the skill level was just so much higher. One thing I like about playing in the PCL was the travel. When you went to another city, you played there for a full week, so after a while you almost felt like you were home. And on certain weekends, the teams would play home-and-away doubleheaders. Oakland and San Francisco did that and the Hollywood and L.A. teams also did it. Some of the guys I remember form those days are Dino Restelli, Chuck Essegian and Red Adams, all teammates of mine with Sacramento or Portland.”

On Being a Manager:

“I enjoyed working with the kids in the minors, because they were anxious to learn and I was a pretty decent teacher. I loved teaching the fundamentals, like hitting the cutoff man and how to turn a double play. Bunting is a lost art in today’s game, but every one of my players became a great bunter, because I focused on it and drilled them on it every day. If you can’t bunt, you shouldn’t be a major leaguer, that’s for sure, but a lot of these guys today can’t bunt a lick. Managing in Albuquerque was fun and I loved New Mexico. The ballpark was big and the town was very supportive. I loved managing in that environment, because I felt like I was making a difference and creating team chemistry.”