“I rushed a little through that ninth inning because Chico Ruiz had to go to the bathroom. So, when I got Cookie Rojas to pop up, Chico didn’t celebrate, he ran right into the clubhouse to relieve himself!” 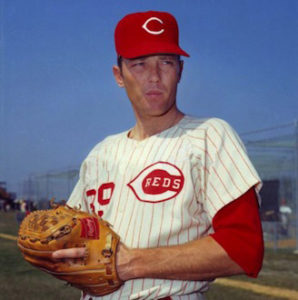 George Culver pitched for the Cleveland Indians (1966-67), Cincinnati Reds (1968-69), St. Louis Cardinals (1970), Houston Astros (1970-72), Los Angeles Dodgers (1973), Philadelphia Phillies (1973-74), and Nippon Ham Fighters (1975). In nine seasons, he appeared in 335 games, including 57 starts, and finished with a 48-49 career record with 23 saves and a 3.26 ERA. He threw a no-hitter for the Reds in 1968 in a 6–1 win over the Phillies at Philadelphia’s Connie Mack Stadium, striking out four batters and walking five. After retiring as a player, Culver spent 30 years as a coach in the Dodgers and Phillies organizations before stepping down in 2010. He currently resides in Bakersfield, California, with his wife of 36 years, Rosie, and has three adult stepchildren.

On his No-No for the Reds:

“I was starting the second game of a doubleheader against the Phillies at Connie Mack Stadium. I ate a late lunch that day and had some indigestion, so my stomach was queasy. I caught a taxi to the ballpark, and the first game went long, so I was just sitting and watching the game. When I went out to warm up, my bad toe started hurting, so things weren’t going well for me that day. When I went into the clubhouse, I had difficulty even putting my shoe on, so I had the trainer inject me with some Novocain. I didn’t get the usual amount of warmup pitches because of the length of the first game, so I made sure not to overthrow because I wasn’t loose yet. It helped because it slowed me down. I just plugged along, but it was not one of your standard no-hitters because I walked four batters, and we made three errors. Philadelphia got an unearned run in the second inning, and after that, we kept them guessing. Johnny Bench caught the first game, so Pat Corrales was my catcher, and we always worked well together. We were ahead 6-1 going into the bottom of the ninth and I thought this is surreal. One time I went five innings against a prison team and they went hitless, but that was amateur ball. I rushed a little through that ninth inning because Chico Ruiz had to go to the bathroom. So, when I got Cookie Rojas to pop up, Chico didn’t celebrate, he ran right into the clubhouse to relieve himself!”

“It’s a good thing that I could play baseball because otherwise my career would have been zero. I was the worst student of all time. My last year in junior college, I was taking an Ag class and I started ditching to hang out with my friends. One day the teacher came by baseball practice and I thought oh no, I am in trouble. But he turned out to be a baseball fan and he ended up giving me a C grade. So, baseball really saved my life in many ways, it’s true.”

On Being Bakersfield Born and Bred:

“It’s a sports town, but baseball is the biggest thing in Bakersfield. From 1965-1973, there were 11 players in MLB from this little town (most notably Johnny Callison and Steve Ontiveros). Two big league umpires are from Bakersfield—Bob Engel and Art Williams. Engel was a good umpire and he had a 25-year career, but it ended poorly when he got caught shoplifting a bunch of baseball cards and was forced to retire. Williams was the first black umpire in the National League for a few years until they ran him out for being black. Eric Gregg was coming up and they didn’t want two black umpires, that’s what they were saying. I batted against him many times in high school; he was a darn good pitcher, so when he was umpiring in my games in the big leagues, it was weird. Williams ended up driving a bus in Bakersfield until he passed, which was sad.”

On the Best Pitching Staff Ever:

“I was on the 1964 Portland Beavers (Pacific Coast League) team that had a starting staff that was the best I ever saw, and many baseball historians agree. We had “Sudden” Sam McDowell and no one could hit him. He went 8-0 with a 1.18 ERA and threw a no-hitter. I also saw probably the most dominant pitching performance I’ve ever witnessed in baseball when Luis Tiant went 15-1 with a 2.04 ERA. That staff also had Tommy John! I went 4-2 with an ERA near 1.00, but believe it or not we finished second to the San Diego Padres that year. We were loaded, with guys like Cesar Tovar, Tony Perez, Art Shamsky and Tommy Helms on that team.”

On Being Part of an Easy Gig:

“When I was a kid, I would go see the California League games here in Bakersfield and thought wow—these guys have a great life. They sleep all day, play baseball all night and get paid for it. Sign me up! Playing in the majors never even crossed my mind when I was growing up. You can’t just sit there and say I’m going to me a big-league player; a lot goes into it and luck also plays a role. I went to Spring Training with the Indians after my first year in the minors and it was something else. I was out there with all of these players I idolized; I had all of their trading cards and knew a lot of their stats. It was like baseball heaven and like being in a dream.”