“I got an infection when I was 10 and I lost almost nearly my whole left thumb. It didn’t affect my hitting, but it sure made it more difficult to throw a baseball. They tried to get me to use a fake thumb, but that just got in the way, so eventually I just learned how to play without it.” 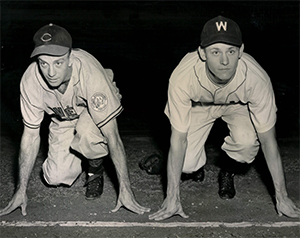 Gil Coan (right) challenged perennial AL stolen base champ (and former teammate) George Case to a sprint to see who was the league’s fastest player. Case beat him—but not by much.

Gil Coan was an outfielder who played 11 years in the major leagues, getting his start with the Washington Senators in 1946. He appeared in over 100 games a year from 1948 through 1952, managing back-to-back batting averages of .303 in 1950 and 1951. After a drop in production in 1953, Coan was traded to the newly relocated Baltimore Orioles for Roy Sievers. Coan spent 1954 and part of 1955 in Baltimore, also playing for the Chicago White Sox and the New York Giants that same season. His career came to an end in 1956 after only four games with the Giants in April of that year.

“I got an infection when I was 10 and I lost almost nearly my whole left thumb. It didn’t affect my hitting, but it sure made it more difficult to throw a baseball. They tried to get me to use a fake thumb, but that just got in the way, so eventually I just learned how to play without it.”

On Playing in the Minor Leagues:

“I started in 1944 when I signed with the Senators and reported to Kingsport, Tennessee to play there in the Appalachian League. I remember they paid me $275 every month and it seemed a lot of money at the time. I did pretty good there, so they sent me to play for the Chattanooga Lookouts in the Southern Association, where I hit around .370. The Sporting News picked me as the best player in the minors in 1945. In 1946, the Senators called me up and now I was making some serious dough—$5,000. I was happy as hell.”

“Oh that was a big day. First, I got to meet President Truman before the game and also Connie Mack. Then I went 3-for-5 in the game. Mack asked me to go to dinner with him after the game, which, of course, I did. He started his career right in Washington, he said–63 years before I did. He was such a nice man—such a gentleman. After that Opening Day game, the reporters started saying I was going to really be something special in the big leagues and I always thought I was good, but not great.”

“I broke three bones in my baseball career—my head in ’50, my leg two years later and my arm in ’53. The first one happened when I was trying to break up a double play and fractured my skull. I was out for six weeks, but I had to sit down after a while because my head starting swelling again. Every year there seemed to be something that would slow me down. During one Spring Training I got an infection in my leg and I was having problems throwing from my hand injury when I was a kid. But, despite all of that, I think I played pretty well.”

On Racing a Racehorse:

“I was fairly well-known for being a fast runner, you know? In 1956, I was playing for the Minneapolis Millers, the Giants’ minor league team. Eddie Stanky was the manager and he had a good team, with guys like Joey Amalfitano, Eddie Bressoud, Bill White and Ozzie Virgil. Almost everyone on that team eventually played in the major leagues. It was nice, because we played in a brand new ballpark (Metropolitan Stadium) and they’d get big crowds every game. So, they had a fan appreciation night promotion and my teammate set a record throwing a baseball 445 feet and they asked me to race a horse from the right field wall to home plate. They gave me a little head start on this horse that they got from some local race track, but I won. They gave me $25 and I was thrilled.”

“I was a rookie and I thought a lot of myself, so one day I challenged five-time AL stolen base champion George Case to a foot race at Griffith Stadium before a game. Case beat me but just barely but it pulled a lot of people into the ballpark. They announced that Case was the fastest man in major league baseball and after the race, I got to meet General Dwight Eisenhower, so that was a big deal.”

Looking Back on his Baseball Career:

“I got to travel all over the country and meet great people just because I could hit a ball and run fast. I was a pretty decent player, nothing special. I had my best year in 1951 and even made it into the MVP voting. Some old players wonder about what could have happened if they played on a different team or during a different period in baseball, but that’s just a waste of time in my opinion. Would I have been happier to make $2 million instead of $5 grand? Hell, yes! But, what can you do? Playing for a second division team (the Senators) most of my career wasn’t what I would have wanted, but I still loved every minute of it! Fate and luck play a part in everyone’s life, so sitting around and fretting about it is kind of useless. I look back with fond memories and I’m proud of what I achieved in baseball.”