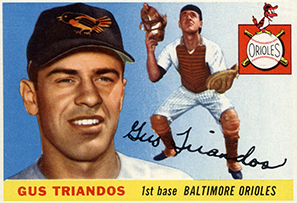 A colorful character, the slow-footed Gus Triandos is best known for catching two no-hitters (including Jim Bunning’s 1964 perfect game) and for never once getting caught trying to steal—although he attempted it only once.

Gus Triandos was a solid catcher during the 1950s and 1960s. He hit 167 career homers, and although he was not fleet of foot (he stole one base—via catcher indifference—and holds the record for most consecutive games played without being thrown out at 1,206), Triandos had a great arm and was known as one of the top-fielding backstops in the league throughout his years with five major league teams. He lived his remaining years in San Jose, California and ran a postal company until his death in March 2013. He was wearing a neck brace the morning I met him, the result of a recent car accident.

Gus was a part of much baseball history. A two-time All-Star, he caught Jim Bunning’s perfect game in 1964, used the big oversized mitt to catch knuckleballer Hoyt Wilhelm during his 1958 no-hitter and was the opposing catcher when Ted Williams hit a home run in his final plate appearance in 1960.

On being a Long Shot to make the Bigs:

“Sad fact was, I had a tough time getting signed. I wasn’t that sought after. Hell, I wouldn’t even be signed today. No way I would even be signed now. The scouts said I could not hit a high fastball, which was a bunch of crap. Sure, if you had an extra good fastball, you could do that to me. But if you only had an ordinary fastball, you couldn’t get away with it. Back then, they had D, C, B, A, AA, AAA teams—they had a jillion ballplayers out there and I think that it, I don’t know. They just wanted to sign bodies back then. But, even when I was playing minor league ball, every scout that ever came through town and the local sportswriters would ask him and they’d say I didn’t have a chance. But, it never pissed me off, because I thought I didn’t have a chance.

It was a strange time, but also a great time, because I just enjoyed myself and I really enjoyed playing ball. I was 19 years old and my feet were so bad I knew I wouldn’t last. The best thing that happened to me was going into the Army. Those military issue boots straightened my feet out. Don’t ask me how, but they did.”

On his Time in High School:

“Our team was tremendous. My senior year, we had 11 guys sign professional contracts. Mission High was the baseball school, Polytechnic was the football school and Lowell was the basketball school in San Francisco at that time. Our coach was George Wolfman and later he coached the team at Cal, where he took them to the national title one year. But of those guys who got signed, there was only one who really made it for any time in the majors and that was me.”

On his All-Star Appearances:

“I played in two All-Star Games. I hit a two-run double in one of them, off Elroy Face, in 1958. I probably would have been the MVP had we won. All-Star games were a real honor for me, but a lot of the other players thought it was a waste of time. One year they got together and they were going to try to get some real money to play in these games, but that didn’t go anywhere.”

“That prick (Casey) Stengel didn’t even put me in that game. Was that in St. Louis? Yeah. Didn’t even put me in. That Stengel really hated my guts. And then the next year it was in Baltimore. That’s when they let the players pick the All-Stars for the first time. And I got in because I was elected by the players. And Casey still didn’t want to play me, but he had no choice. He didn’t like me, because I couldn’t run or do the hit-and-run and I was a lousy bunter, so I wasn’t his kind of player, I guess.”

On Players he Liked—and Disliked:

“I never got to where I disliked a guy. There were a couple I ended up disliking, but s**t, life’s too short. I stayed away from them. You see them now, and you never get a chance to talk. Maybe for a minute at some dinner or event or something. But, there were very few people—players and managers—that after it was all over, I disliked…Stengel was one of them. I wasn’t his type of ball player. You know, I couldn’t run. I couldn’t hit to the opposite field. And for some reason he just didn’t like me and it was patently obvious. The greatest thing that ever happened to me was him disliking me. He also made the right pick. He decided that he liked Elston Howard better than me. And that was a helluva pick. Howard won the MVP and I well—didn’t.”

On the Baseball Life:

“It gave me a helluva life for 12 years. I really enjoyed myself. It was kind of a psychological thing, you know. Like you have a little bit of a low opinion of yourself. And then you get to where you can do something well and get a little recognition. I went from feeling like a loser to being somebody people respected, just because I could catch and hit a ball. Don’t get me wrong, it was good. I wouldn’t have a chance to do it now. In this day and age, I don’t think I could get signed. When those 11 guys from my high school got drafted, I never thought I’d be the one to make it to the majors. I wouldn’t trade what I did in baseball for anything, but there was a lot of stuff that was irritating too. But, overall—most of it was on the plus side.

I had a lot of liabilities. I couldn’t run. I was a good catcher and all that other happy horses**t. The one thing I could do well for at least the first half of my career in the majors was I could throw. It was one of the few things I had. Most good basestealers stole off the pitchers. But, offensively, I could be pitched to. I’m just thankful I was able to do what I did.

I don’t look at the game now the same way I did then. I can’t watch it anymore. I haven’t been to a MLB game in more than 15 years.”

“You almost have to be an a**hole to be an umpire. You have to take so much s**t. You start the season out real good friends with them and by the end of the season guys were salivating, hell, saying they hated each other’s guts. The only reason the umps liked me is I didn’t show ‘em up, and I never argued with them. I always stayed off them so that the fans wouldn’t get on them. Now I see these umpires acting like spoiled brats and they wouldn’t get away with that during my day.”

On Appearing on the TV Show “Home Run Derby”:

“That was one of the most embarrassing things I’ve ever done. I got bounced out the first time. Dick Stuart and I embarrassed the whole damn thing. They did it the middle of winter, when guys hadn’t been to Spring Training, we were both so out of shape. Every once in a while they show it on TV and I turn it off.”

“What, do they think people are stupid? When this guy goes from 175-180 to 210 and nobody says anything? Of course, I always thought they had ‘em, but I didn’t give a s**t. I still don’t. If (Barry) Bonds wants to screw up his life just to hit more home runs, that’s his choice.”

“The way things are now, the kind of money these guys are making, it’s messed everything up. In our era, there was more integrity and more love for the game. Look at these f**king guys, they buy two-, three-million dollar homes; some of them have six or seven kids with five different women? We weren’t chorus boys, but this is crazy.”

On Playing in the Astrodome:

“The Astrodome was a theater, it was an architectural wonder at the time. Then, they figured out they couldn’t grow grass in there. It was a big place with nobody in it, like the Grand Canyon.”

“What, do they think people are stupid? When this guy goes from 175-180 to 210 and nobody says anything? Of course, I always thought they had ‘em, but I didn’t give a s**t. I still don’t. If (Barry) Bonds wants to screw up his life just to hit more home runs, that’s his choice.”

On Hall of Famers:

“Any Hall of Famer who thinks he’s so wonderful because he did all these great things in baseball is full of crap. He was able to do it because he was blessed by God with natural ability. He didn’t necessarily have to work that hard to be a star. I’ve seen .220 hitters work a lot harder than a lot of Hall of Famers. There were some good ones, but there are also a lot of bad guys who are Hall of Famers. That’s why I never really idolized Hall of Famers, because I thought they were blessed.”

On Altering the Field:

“Please don’t print this until I’m gone, okay? When I’m dead, you can do whatever, but not until. When I played in Baltimore, they used to let the grass grow longer and soak down the basepaths. (Manager Paul) Richards cut the arc out between the pitcher and the home plate; he cut it out a little further. He mixed some sand in there with the dirt and then got it all wet. And then he soaked it, so that when you hit a ground ball and it hit that wet dirt, it would slow it way down. Then, it would hit that think grass—damn, you couldn’t even get the ball through that infield in Baltimore. I didn’t really think about it until years later when they accused Alvin Dark of doing the same to slow down Maury Wills. I thought to myself—Richards was doing the same thing, but he was smart about it and he never got caught!”