“I was a backup catcher, but the fans in Minnesota treated me like a star and I loved it. I would go out in public and people would come up to me and congratulate me, but I was thinking, I really didn’t do anything special or notable.” 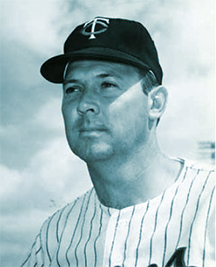 Hal Naragon played for the Cleveland Indians (1951; 1954–59) and Washington Senators/Minnesota Twins (1959–62) primarily as a backup catcher playing behind starting catchers Jim Hegan and Earl Battey. In his 10-season major league career, Naragon was a .266 hitter with 262 hits, 27 doubles, 11 triples, six home runs and 87 RBIs in 424 games played. Naragon’s most productive season came in 1959, when he posted career highs in games (85) and hits (57) while dividing his playing time with Cleveland and Washington. He also caught one inning for the Indians in Game Three of the 1954 World Series against the New York Giants. Following his playing career, Naragon was the bullpen coach for the Twins and Detroit Tigers from 1963-69. He was closely associated with pitching coach Johnny Sain, and was a member of the 1965 American League champion Twins and the 1968 world champion Tigers.

Signing with a Handshake:

“I went to a tryout held by the Cleveland Indians and while I was there I met Bill Veeck, the team’s owner. He was a real nice man and he was interested in me, but I never mentioned that I was only 17. Back then, you couldn’t sign a kid until he was at least 18 and teams could get in trouble if they tried to do it behind the league’s back. My dad was there and Mr. Veeck told him, ‘I want to sign your son’; but then he told him I couldn’t because I wasn’t even out of high school yet. But, my father told him that once I graduated, I would sign with the Indians and they sealed it with a handshake. During my senior year, the Cubs and a couple of other teams were interested in me, but I remembered that handshake and ended up signing with Cleveland.”

“Frank Lane, Cleveland’s general manager, was known for making a lot of crazy trades. He would find another player who thought would help the team, but it really affected the team’s chemistry because it was like a revolving door with new faces all the time. When he traded Rocky Colavito for Harvey Kuenn, the fans wanted to kill him. So, as a backup catcher for the Indians, I knew I wasn’t going to ever be safe on that team. But, I liked Frank; he was a good man, even if most of his trades were lousy. One day, he saw my daughter playing with a dog during Spring Training, and he was amused by her and the dog. So, he said to me—buy your daughter a puppy and send me the bill and I’ll pay it. Then, right after that, he traded me to the Washington Senators. When we got settled in D.C., we bought my daughter a dog and sent Lane the bill and he paid it. He made more than 400 trades in his career as I recall, so I didn’t take it personally.”

On the Best he Ever Saw:

“Ted Williams was by far the greatest hitter I ever had the pleasure to watch. I also saw Stan Musial in an exhibition game and he was a good hitter, but not as good as Williams. You could fool Williams now and again, but he was so quick, he made up for it and don’t try to throw him that pitch again. He had an amazing ability to remember every one of his at-bats. The best pitcher I ever caught was Bob Lemon, he had all the good pitches and he would throw them at any time. He threw strikes most of the time; he was a great fielder and a decent hitter too. Early Wynn was the toughest pitcher I ever saw and he would never give up, so he was also a great one. I got to catch a lot of pitchers, including (Bob) Feller, of course. The toughest pitcher I ever faced was Bob Turley; he was literally unhittable, at least for me.”

“They always talk about location today, but I think it’s really movement that gets batters out. I also wish they would challenge the hitters a little more. They get two strikes on the batter and then they start nibbling around and before they know it, the count is 3-2. They waste a lot of pitches and it’s a disgrace. Why would you waste any pitches with a 100-pitch count hanging over you? The better pitchers don’t waste any time fooling around, they’re always ready to go.”

On Calling a Game:

“The people in D.C. were upset about the team going to Minnesota and those last few games at home were depressing. But, when we got to our new home, the people were so wonderful, it was amazing. They would cheer even if we lost! I was a backup catcher, but the fans in Minnesota treated me like a star and I loved it. I would go out in public and people would come up to me and congratulate me, but I was thinking, I really didn’t do anything special or notable. That team was getting better with players like Harmon Killebrew and Tony Oliva, so we were hopeful, to say the least.”