“When I was 15 years old, a Tiger scout approached me and asked if I would want to come down to Tiger Stadium and catch batting practice while they were trying to get Hank Greenberg into shape…I jumped at the chance.” 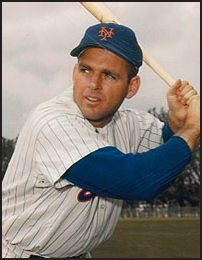 Hobie Landrith is perhaps best known as the New York Mets’ first pick in the 1961 expansion draft. Manager Casey Stengel explained the choice by saying, “You gotta have a catcher or you’re gonna have a lot of passed balls.” Landrith had been a backup for the Cincinnati Reds (1950-55) but was traded after the 1955 season, when he had missed time with a broken collarbone. He was a regular for a weak Chicago Cub team in 1956 and hit .221 while leading the all National League catchers in errors. As a regular on the 1959 San Francisco Giants, Landrith had his best year, hitting .251 with 29 runs batted in and 30 runs scored in 283 at-bats.

On the Early Days:

“I was lucky because I had an early childhood experience in baseball that probably a lot of other kids would want to copy. When I was 15 years old, playing baseball on the sandlots of Detroit, a Tiger scout approached me and asked if I would want to come down to Tiger Stadium and catch batting practice while they were trying to get Hank Greenberg into shape. He had been in the military, had been released, and the Tigers were on the road, and it was a 10-to-15-day span that he was going to be working out, hitting balls and catching balls, whatever. I jumped at the chance and this brought me into contact with members of the Detroit Tigers baseball team, and when the team returned home, they asked me if I would catch batting practice. I was just overwhelmed by the opportunity to be rubbing shoulders with these players. It was great because it gave me an insight into what it would be like to be a major league baseball player. It was at that time that I felt like, yes, if I worked hard and really honed my skills, that I might have a chance to play in the major leagues. Five years later I was there.”

On his Catching Skills:

“I was in the major leagues more because I was a good defensive catcher, and the fact that I was good at handling pitchers. I always thought I was a fairly decent hitter, but I realized that I wasn’t in the big leagues for my bat. I had what they called ‘warning track power.’ You know, I’d hit the ball pretty good, the fans would get up on their feet, and then they’d groan, because the ball would die at the warning track.

I became good at handling pitchers from things I had learned from Birdie Tebbetts when I was with the Reds. He taught me when to get on ‘em, when to not get on ‘em. I was able to recognize when a pitcher was losing his stuff or losing his composure and tried to get him back on track. And sometimes I had to play the bad guy and say things to the pitcher to get him riled up. I called all my own pitches.”

“You have to know your umpires, number one. And you’ve got to be careful of what you say and how frequently you say it. I remember Al Barlick, first time I said something to him, and he told me, ‘You do the catching and I’ll do the umpiring, okay?’ He said it in a very stern way. And he was the best umpire in the National League at that time. And I said, ‘Okay.’ So, I knew right then to catch the ball and let him umpire. As long as you didn’t use profanity, you could talk to most umpires and not get thrown out.”

“It was 1954, the year the New York Giants won the pennant, and I was with the Reds that year, and we never beat the Giants at the Polo Grounds. The Giants always seemed to rally late in games and beat us. Well, many years later I found out that they were stealing our signs from center field. In some instances, you’d see a batter swing at a pitch like he knew what was coming, and in those instances we’d knock him flat on his butt, because we didn’t know where they were getting the signs. One time in Milwaukee we found out Braves’ players were getting our signs from the bullpen. They had binoculars out there and they were signaling them in to the batter. After the game, Alvin Dark came into the clubhouse and asked us, ‘Does anyone have a pair of binoculars?’ So, we took them out to the bullpen and gave them some of their own medicine. We killed ‘em that game. That’s why we would change our signs when a guy got a real good cut at a ball. We figured they had our signs and at that point and we’d change them.”

On playing in Candlestick Park:

“It was a blustery, windy, cold place—it did everything but snow there. I’ve played in early season games in small towns back East when it was cold, but I have never been as cold as I was at Candlestick. And it didn’t matter how many layers of clothing you put on, either. That damp air at night would just chill you to the bone. I remember one night Harvey Kuenn put on a bunch of clothes—he had gloves, sweaters, several pairs of socks, long johns—and he was still freezing.”

On playing with Willie Mays:

“Mays used to always call me ‘Honest John,’ although I don’t know why. He gave some of us strange nicknames. Folks would criticize Willie for being hard to talk to, but it wasn’t always that way. Willie got burned by the press one time too many, and he got a little harder every time it happened. He was never that way with his teammates, though. I loved Willie and I had a great relationship with the man. I still do.”

“Dusty Baker asked me to come to spring training a few years ago to coach the Giant catchers, which I did. And I got a chance to see Barry Bonds in the clubhouse. For the most part, he was unapproachable. When he walked around in the clubhouse, you always had an uncertain feeling about him. One time I asked Barry for an autograph and he turned around and walked away from me. Orel Hershiser was there and told him to come back and sign, so he did. Barry is a nice person, but for the most part, in the clubhouse, he was not very approachable.”

On playing with Willie McCovey:

“People ask me all the time, what kind of a guy is Willie McCovey? And I tell them, if Willie walks into a room and smiles, everyone in that room smiles too. I was in the lineup for his first major league game when he went 4-for-4 against Robin Roberts. I just feel fortunate that I was able to play with the man during my career. He’s just a wonderful person.”

“The GM with the Mets was George Weiss, what a piece of work he was. I mean, if you’re the first pick, you figure you should make at least the same as you did the year before, right? No. They offered me three or four thousand dollars less than what I was making with San Francisco. So, I sent the contract back. I told Weiss that I found his offer to be totally unacceptable. He sent me the same contract three times and I sent it back three times. I told him that I’d stay home before I signed these contracts. He wouldn’t budge, so I finally had to sign. The man was cold, cold, cold, and I didn’t enjoy that at all.”