“They were all nice fellas on the Brooklyn Dodgers. Great guys. Every time I came up to play for the big team, they treated me real nice. Snider, Jackie Robinson, Roy Campanella, Pee Wee Reese—they were all class acts.” 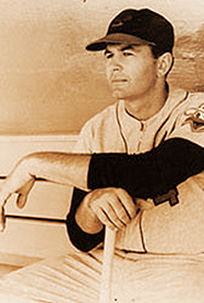 Before his brief reign as a slugger for the Baltimore Orioles in the early 1960s, Jim Gentile struggled to crack a Brooklyn Dodgers roster loaded with iconic talent.

A powerful slugger listed at 6’4”, 215 lb, Gentile languished for eight years in the minors for a Dodger team that already had all-star Gil Hodges at first base. Traded to Baltimore, Gentile enjoyed his best season in 1961, hitting a career-high .302 with 46 home runs, 141 RBIs, 96 runs, 147 hits, 25 doubles, 96 walks and a .646 slugging average. He was considered in the MVP selection—and finished third behind, not surprisingly, Mickey Mantle and Roger Maris. In addition, Gentile hit five grand slams—including two straight in one game—setting an American League record that stood until Don Mattingly belted six in 1987.

Following his major league career, he played one season in Japan for the Kintetsu Buffaloes in 1969. Gentile managed the Fort Worth Cats when they returned to baseball in 2001-02. He’s currently the hitting coach for the Schaumburg Flyers.

What Pitchers Gave You a Hard Time?

“For some reason, I had a lot of trouble from Jim Perry, Gaylord Perry’s brother, I don’t know why, but he owned me. I knew that I was in for a battle every time I faced him. You have your good days and bad days, but they were always on me about Whitey Ford. Every time I faced him, I was having a bad day. One day he struck me out and I broke my bat on home plate, so since then they were saying I couldn’t hit Ford. I did take him downtown three times in my career, so I don’t mind it so bad. I beat him in a game 2-1 in Baltimore, which was satisfying.”

On his Batting Technique:

“To tell you the truth, I tried to hit what I could see—which is probably why I was a career .260 hitter. If the pitch was close and I could see it, if I thought it was in the strike zone, I’d swing at it. Today they tell ‘em all how to choke up and change their hitting style with two strikes. I never did. If I was playing today, I’d probably take a different approach, but back then I just got up there and hit. Back then they didn’t have specialized individual coaching, trainers, physical therapy, videotaping, etc. If they had taught me how to swing in and out, the way Derek Jeter does, I’d have been a better hitter. That’s what the Red Sox are doing with David Ortiz right now—they’re trying to get him to hit the other way. But, back then I had one thing on my mind and that was driving in runs. I hit a few home runs the opposite way, but I never got many base hits that way, that’s for sure. Back then, all they would throw me was sliders inside. They were asking me to pull all day long.”

“We were playing in Kansas City and I guess I didn’t have a very good day. So, I was sitting in the clubhouse and I wasn’t normally a beer drinker, but that day I just felt like a cold one on a hot day. So, I had a beer. I was sitting in my locker, facing my locker and (Oriole manager) Paul Richards was across the room, right behind me. I was sitting there keeping to myself for what must have been 15-20 minutes, when Richards said, “Hey, Jim.” So, I turn around and there’s Richards, all dressed and ready to leave. So, he asks me to come over and speak with him, so I walked over to him. He says, “Look Jim—you’ve been in this game all long time. And you know we all have good days and bad days. We’re going to play a doubleheader tomorrow and you’re going to come out and have a real good day. So, don’t give it a second thought.” So, I said, ‘Okay, Paul.” I turn around to walk back to my locker, and I suddenly see 20 beer cans stacked under my chair. Richards thought I was sitting there getting soused. My teammates had set me up good!”

“I started my career as age 18 in Class A for the Dodgers. They were thinking that if I didn’t play well, they’d send me down to Class B or C. But, I led the league that season with home runs, and the next year, they sent me right back there. Nobody in the Dodgers minor system at this point moved very far within the minors, because they were loaded with all the great stars. I hit 36 dingers that year, so they sent me to Fort Worth the next year, and I hit 40 that season. They had always been telling me that it would take three-to-four years to make it to the big leagues, and I figured I should get a shot, especially because I traveled to Japan with the Dodgers that off-season and I led the team in everything; every category and home runs, everything. I was thinking now I am finally going to get a shot. They were talking about moving Gil Hodges to third base to bring me up. Well, it never came around.

So after that, all I wanted was just to get a shot to play in the big leagues; for any team, I didn’t care. I wanted to get a couple of at-bats, to find out for myself if I could hit in the big leagues. If I can’t do it, then I’d just accept the fact that I was a minor leaguer. I was blocked for playing with the Dodgers by Gil Hodges for seven years—two in single-A, two in double-A and three in triple-A. They had so many players that I never got a chance. They kept us around for a long time, going up and down, up and down, but they never gave me much of a shot. They never changed that infield for seven years.”

On Playing Briefly With the Boys of Summer:

“They were all nice fellas on the Brooklyn Dodgers. Great guys. Every time
I came up to play for the big team, they treated me real nice. Snider, Jackie Robinson, Roy Campanella, Pee Wee Reese—they were all class acts. But, they had their cliques, so you kind of stayed with yourself, as a new player coming up late in the season. The one guy who was especially nice to me on the Japan trip was Campanella. He was the one who gave me my nickname ‘Diamond Jim’. He called me ‘a diamond in the rough’ during the Dodgers’ 1956 tour in Japan, but my performance there didn’t get me any closer to the majors.”