“I didn’t get it as cleanly as I would normally—right at the very tip of my glove hanging halfway out of my mitt. The Reds’ manager Sparky Anderson and a lot of the Cincinnati fans thought it bounced out…If I had missed that, Tony Perez would have scored (from first) and who knows what happens after that?” 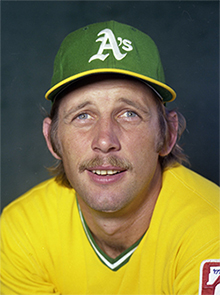 A reliable and clutch left fielder, Joe Rudi was an important member of the Oakland A’s 1972-74 dynasty. He was the runner-up for the American League Most Valuable Player twice during those years and also won three straight Gold Gloves (1974-1976). Rudi’s offensive numbers won’t dazzle anyone today, but he did lead the AL in total bases in his best offensive season of 1974. He also hit .300 in 70 World Series at-bats and made one of the top catches in Series history in 1972. In 1976, Rudi was sold to the Boston Red Sox but the deal was voided and he was returned to the A’s. He signed as a free agent in 1977 with the California Angels and then one season later, was traded to the Boston Red Sox with Jim Dorsey and Frank Tanana for Fred Lynn and Steve Renko. He finished his playing career at age 35 with the A’s and then coached in the Oakland organization for several years.

On Getting No Support from Father:

“Yes, he didn’t like the idea of me being a professional baseball player. Get a real career, he kept telling me, but I thought I am going to give this thing at least a try. We are originally from Norway, where sports are hobbies and for leisure. He would remind me over and over again that in Norway young men worked hard learning to be shipbuilders or fishermen or engineers and that fooling with bats and balls is a waste of time.”

On Being Blue for Life:

“My father was a huge Brooklyn Dodgers fan so I became one too. He loved Pee Wee Reese and Don Newcombe and I remember watching the 1956 World Series with him on our old black and white TV with bad reception. It was awesome when my first manager in the minors was Duke Snider, he was a great guy and so fun to play for. When I got drafted by the Dodgers, I was thrilled and couldn’t wait to go through my first Spring Training at Vero Beach in 1967.”

On Making the Big Team:

“I had a good Spring Training in 1967 and that’s when Alvin Dark told me I made the team; I became a Kansas City Athletic after all that work it paid off. At first, I had some problems playing in the outfield there in Municipal Stadium. It was tough to adjust from little minor league outfields to the one in the majors. I was sent down in late April, but I did well in Double-A, where I played at first base quite a bit. They told me that by taking all that infield practice and throwing hard every time, it would make my arm stronger and it did for when I returned to the big team in September.”

On the All-Star Team in Oaktown:

“Everyone writes about Reggie (Jackson), Rollie (Fingers), Vida (Blue) and (Sal) Bando, but they often forget about all of the other great players we had. Bert Campaneris was so consistent and a great leadoff guy; Blue Moon Odom pitched his best in the biggest games; Gene Tenace had that great World Series in 1972 but he was always solid and knew how to handle the pitchers. Ken Holtzman, Dave Duncan, Mike Epstein, Don Mincher—we had a ton of good role players. And Dick Williams was the best manager I ever saw—a great leader who was direct and honest and I loved him!”

On his Famous Catch:

“When it happened, I didn’t think it was such a big deal. It was Game Two of the 1972 World Series against the Cincinnati Reds at Riverfront Stadium. It was a tight game and when I hit a home run in the third inning, I never thought that would be the deciding run. We were ahead 2-1 in the ninth, and Dennis Menke got a hold of it, and I just tracked it down and got it right up against the wall. I didn’t get it as cleanly as I would normally—right at the very tip of my glove hanging halfway out of my mitt. The Reds’ manager Sparky Anderson and a lot of the Cincinnati fans thought it bounced out, and Anderson tried to protest it and said I trapped it. If I had missed that, Tony Perez would have scored (from first) and who knows what happens after that? MLB used that catch in all of their highlights for years and years after that, but I never got tired watching it.”

On Being Coached by the Yankee Clipper:

“People ask me what DiMaggio was like and all I can say is that he wasn’t what people thought, he was telling jokes and pulling pranks, and he loved busting chops. You could see that he liked the team atmosphere and just wanted to be treated like one of the boys. I was able to see a little bit of his life firsthand and that he was hounded by the media and fans constantly–everyone wanted a piece of him, and I know it got old real quick. I was fortunate to be able to work with him because I believe he was one of the finest outfielders ever. I worked a lot with him, and our manager Working with him and Bob Kennedy was the best thing for me, and I tried to absorb everything they taught me.”

On his Problems with Charles Finley:

“I got paid $84,000 in 1975 because Finley didn’t want me to go through arbitration. I asked for $400,000 over three years after that, and Charlie wasn’t happy with the figure and would not negotiate. So, I started the 1976 season without a contract. In June, Finley tried to sell Rollie Fingers and me to the Boston Red Sox for a million bucks and Vida Blue to the Yankees for a million and a half. I was upset with Boston because they told us they didn’t have a deal yet and were playing games. A couple days after that, the Commissioner Bowie Kuhn killed all the deals because he said it wasn’t in the best interest of baseball. I went back to Oakland and ended up having a decent season there.”

Before They Were the Bash Brothers:

“I coached (Jose) Canseco and (Mark) McGwire in the minors, and they were really good kids with great attitudes. The A’s manager Tony La Russa wanted me to make Jose a more complete player, and he was an excellent student. I would teach him something, and he would pick it up fast. Years later, we all knew they were juicing; they got so big it was obvious. It was after the 1994 season when there was no World Series, so MLB wanted people to come back, and an exciting home run competition was timely. I wasn’t shocked when I learned about steroids because I remembered back in 1968, I saw that our trainer had Tupperware containers full of black beauties, greenies, sleeping pills, pain pills—you name it. You could take handfuls if you wanted to, and no one would question it. If McGwire had been candid and told Congress in those hearings that he took steroids when it was not illegal, I think he would have been fine. When I played, it was a finesse game, but now it’s more based on strength and power instead of speed and defense. In my day, we were told not to lift weights, especially during the season. Now it’s all about home runs because that’s what the fans want, but there are so many strikeouts now, it’s crazy.”