“So, we had a team meeting the night before the (1954 World Series) and Durocher started reading from this scouting report and going through their lineup. After about the third name, he stopped and said, ‘We beat these guys in the spring and we’ll beat them again’ and that was the end of the meeting. He took that scouting report and threw it in the trash.” 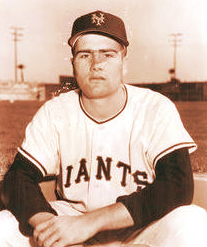 Joey Amalfitano didn’t play a single game in his first two years as a New York Giant due to his “Bonus Baby” status.

On his Early Days:

“When I was around ten years old, we had a very good softball team in grammar school. It was fast pitch softball and we played all over Southern California. We were going to play St. John Bosco one day. That was before the freeway was there, to give you an idea of how long ago that was. We went there thinking we were going to play softball, and all of a sudden we saw that they were playing baseball, something we had never done. Our parents had taken us all this way, so we decided to play and man—I liked it. I hit two home runs that day. We were playing in a huge field, so the ball just kept rolling. When I hit the ball, the bat sounded great and the ball went further. Right there, I got hooked. I do remember that and the sensation I got from it.”

“I was told that Joe liked me, at least that’s what I was told. So, then I got the ground rules, which I won’t share with you, okay? I was basically told how to act in his presence. You know, I stuck to the rules. I did the right thing and showed him respect and that’s why I was able to break bread with the man many, many times. Joe was always nice to me and I never saw him being sullen or rude to people, like some people have said. He was a complete gentleman, but he had ground rules.”

On the Bonus Baby Rule:

“I was on the Giants and not in the minors where I should have been, because I signed a deal for more than $6,000, which meant I had to be on the team’s 25-man roster. That was a big deal at the time, but it’s tip money for these players today. So, I basically sat on the bench and watched the games in ’54 and ’55. Seeing Leo Durocher in action I learned a lot about the game, but he was saddled with me, because I couldn’t play, at least at that level. I was essentially a spectator in a uniform. The team had two bonus babies in 1954: Myself and Paul Giel, a fella who was also a college football star who actually finished second in the Heisman trophy voting one year. So, Leo had 23 players essentially, because Paul and I couldn’t be relied on to do anything. We had no business being there at all, but can you imagine how a manager would do today with only 23 guys? I’m sure he wouldn’t like it, but Durocher never complained and all he did was win.”

“It was sad, because he made it into the Hall of Fame, but he wasn’t alive to enjoy it. I remember we discussed it one day, we were very close. One year, it looked like Leo was going to get elected and he didn’t make it. So, Peter O’Malley, the owner of the Dodgers, contacted me and asked me to call him and invite him to Vero Beach for spring training as his guest. But, after the disappointment of not getting into the Hall, Leo was really down and he said I don’t feel like doing it, but please thank Peter O’Malley for me, which I did. Leo said, ‘I know I’m going to get in, but I just hope it happens while I’m alive.’ But, it didn’t happen. (Durocher died in 1991 and was elected into Cooperstown in 1994.) He was tough on me and everyone else, but especially tough on me for some reason. He teased me constantly, but I think he was doing it to toughen me up. I was young, hell—I didn’t know what was going on. He would love to blast fungo shots at me all the time and he’d laugh when they bounced off my shins. I played very little for him, but I coached with him for many years. He taught me everything I know about the game. He was a great bench jockey and watching his mind work was amazing. If he yelled at a player, it was because he respected the guy; that was his way of doing it. Sometimes he would get very aggressive with the things he said, especially during the biggest games, when he was trying to rattle the other team.”

“The first time I met him, he walked up and put his arms around me and said, ‘This is the kid who got all the money!’ referring to my bonus. And then he laughed his great laugh. He was a happy man and he loved playing. I never heard him complain or say anything bad about anybody. He was only three years older than me and we would drive together over to Ebbetts Field when we played in Brooklyn. He was an incredible player and he would do spectacular things all the time, to the point where it was almost expected.”

“We were confident, so when we swept the Indians it wasn’t a big surprise. We played them a few times during spring training that year and beat them pretty handily, as I recall. So, we had a team meeting the night before the series and Durocher started reading from this scouting report and going through their lineup. After about the third name, he stopped and said, “We beat these guys in the spring and we’ll beat them again’ and that was the end of the meeting. He took that scouting report and threw it in the trash. My good friend Johnny Antonelli was unhittable in that series. He got a win and a save and we got some timely hitting and that’s how you win.”

On Bunting as a Lost Art:

“I teach these kids how to bunt, because they don’t know how to do it right. Teams just don’t bunt anymore, because everyone is trying to smack the ball out of the yard. The hit-and-run, sacrifice, double steal, suicide bunt—teams used to do that more. Leo Durocher taught me how to use all the tools and strategy you possibly can to get an advantage over your opponent and bunting is one way to do it. On any team, everyone should know how to bunt. Even your power hitters, because you never know, you never know.”