“The (restaurant) started doing well and we got excited. This really nice old guy came there all the time, he was a regular. A very pleasant old gentleman that everyone seemed to know and like. Then, one day two FBI agents walked up to us and said, ‘Can we talk?’ It turned out that this nice old man was Jimmy ‘The Weasel’ Fratianno, the famous mob guy turned informant.” 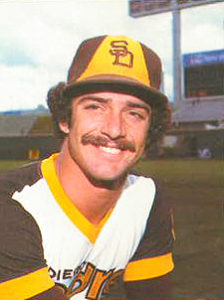 John D’Acquisto pitched for six MLB teams, including the San Francisco Giants (1973-1976), St. Louis Cardinals (1977), San Diego Padres (1977-1980), Montreal Expos (1980), California Angels (1981) and Oakland Athletics (1982). He was drafted in 1970 by the Giants in the first round out of St. Augustine High School in San Diego and made his major league debut in 1973. D’Acquisto was named the National League Rookie Pitcher of the Year in 1974 when he went 12–14 with a 3.77 ERA for the fifth-place Giants, but he missed most of the next season after elbow surgery. In four seasons with the Giants, D’Acquisto was 18–27 with a 4.68 ERA in 83 appearances, including 64 starts. After he retired from baseball, D’Acquisto became a registered investment advisor. In 1996, he was sentenced to five years and three months in prison for trying to pass off a forged $200 million certificate of deposit. D’Acquisto was also indicted in 1998 on charges of defrauding investors of approximately $7 million. As a result, he was sentenced the following year to an additional four years and seven months in prison after he pleaded guilty to wire fraud and money laundering. Today, John lives in the Phoenix area and works for MLB as part of baseball’s ongoing effort to quicken the pace of games.

On Growing up in San Diego:

“My father Fred was well known in San Diego. He worked for 51 years at the legendary Anthony’s Fish Grotto Restaurant right in the heart of downtown and I worked there too, starting as a teenager. I went to St. Augustine High School and played baseball and football. My family knew a lot of people there and growing up in San Diego was a wonderful experience. I wanted to get drafted by the Padres, but when the Giants took me in the first round, I wasn’t upset. Returning back to play for the Padres years later was special. It was like coming home.”

“Billy Martin was an amusing man and a great manager. People say he overused all of those pitchers and that’s why they eventually developed arm problems, but I disagree. I told Billy a few times that he should use me more, but with the designated hitter, they let the starters stay in games a little longer. Keough, McCatty, Norris, Kingman and Langford would eat up innings and they loved to pitch. Plus, our bullpen wasn’t great, which meant that we didn’t really have the luxury of calling on those guys in tight situations. Billy had no faith in the bullpen, so the starters threw a lot. Today, with pitch counts, managers and pitching coaches watch their pitchers more closely, but back then if a pitcher said he feels okay, they keep him in.”

On Life with the “Count”:

“John ‘The Count’ Montefusco and I were friends for a long time and every time I came to San Francisco as a Padre, he and I would have some fun. In fact, I owned a restaurant with the Count in SF for a short time, but that’s another story. I would stay with Montefusco when I was in the City and even though our crazy days were over, we still had a great time. For the first time in our careers, we were scheduled to pitch against each other, so we decided to make a bet. Both of us were having lousy years but by pitching against each other, the competitive juices got going. So, we started trash talking and pretty soon we were betting our pink slips. In short, we won the game when Johnny LeMaster made an error, but I had a great day anyway and of course, I drove away in the Count’s Porsche.”

On Playing in the Senior Professional Baseball Association:

“There were eight teams in the league, all of which were in Florida, so how could I complain? I was playing with guys like Bert Campaneris, George Foster, Vida Blue, Bobby Bonds. There were a lot of great names there, but everyone was older and slower. I was playing for the St. Lucie Legends, and then I got traded to the Bradenton Explorers with our player/coach Graig Nettles for Willie Aikens. It turned out better for me. The manager was Clete Boyer, a really good guy and the owner was John Henry, who was trying to get a team in MLB at that time. I asked him for $10,000 every month and a $500 bonus for every save I got and he said he could do that. It was quite an experience playing in the senior league and I actually had pro scouts looking at me there, even though I was in my late thirties.”

On his Short-lived Career as a Restaurateur:

“These businesspeople approached the Count and I, and said they wanted to open a restaurant down by the waterfront, and we said, “heck yes.” We figured it would be a fun spot to hang out at while we were in town, plus we would get to eat free. They named it Montefusco’s and D’Acquisto’s and the grand opening was a big deal. We had Sinatra! The place started doing well and we got excited. This really nice old guy came there all the time, he was a regular. A very pleasant old gentleman that everyone seemed to know and like. Then, one day two FBI agents walked up to us and said, “Can we talk?” It turned out that this nice old man was Jimmy “The Weasel” Fratianno, the famous mob guy turned informant. He was allegedly selling drugs out of our parking lot and other illegal things. When we heard that, the Count and I decided to get out of the restaurant business immediately, which we did.”

On How Getting Arrested Changed his Life:

“I learned a lot of things and one of them was don’t trust people. I got involved with these guys and they essentially made me the scapegoat. The Feds in San Diego wanted me bad, because I was a former Padres pitcher and everyone knew me. During my sentence, I worked as a firefighter and I loved it. I saved peoples’ lives and made a difference. When they tried to add more time to my sentence but failed, I told the judge to send me back to fight fires. That experience definitely affected me in a very positive way, because it allowed me to realize what is truly important in life.”