“It was a big deal—some of us wanted Koufax to pitch Game Seven, but others were leaning more toward Drysdale, because he had more rest than Sandy did. I loved Don, he was a battler and a great pitcher, but if the season was on the line for one last game you wanted Sandy out there on the mound.” 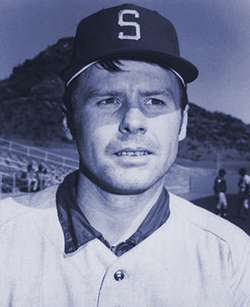 John Kennedy spent 12 seasons from 1962-1974 playing for the Washington Senators, Los Angeles Dodgers, New York Yankees, Seattle Pilots, Milwaukee Brewers and Boston Red Sox as a third baseman, shortstop and second baseman. He received a lot of media attention during his first year in the majors, after hitting a home run in his first at-bat and due to the fact that he had the same name as the President of the United States at the time, John Fitzgerald Kennedy. After retiring as a player, Kennedy scouted, managed, and coached in the minor leagues for many years before passing in 2018 at age 77.

On Becoming a Senator:

“I got a $5,000 offer from Cleveland Indians, but I signed with Washington in 1961 for $1,500. I was getting ready to sign with the Indians, so here I go off with Teddy ‘Double Duty’ Radcliffe to Cleveland for a tryout. Ted had a ton of stories to tell me during the long drive, and most of them were true. Before I was able to sign, the Senators called me because one of my old coaches was a bird dog scout for the Senators at the time. They offered me $1,500, and I took it. I figured that signing with an expansion team would be the fast way to the majors, and it turned out to be a great decision.”

On Breaking Into the Show:

“In 1962, I got called up in September and hit a home run as a pinch hitter off of Dick Stigman of the Minnesota Twins, who was throwing a no-hitter. And after that, things kind of went down from there. I don’t know why I couldn’t hit the ball after having so much success in the minors. I had a lot of good coaching and they had me changing my stance all the time to find out what was wrong. When I was with the Dodgers, Preston Gomez was perplexed about how I wasn’t hitting. I look back at it now, and the problem may have been caused by the fact that my swing was possibly a little too big. When I was in Boston, I began using a bigger bat and started choking way up, and I started getting a few hits. But, yes—as a major leaguer my hitting was pretty terrible.”

“It was a big deal—some of us wanted Koufax to pitch Game Seven, but others were leaning more toward Drysdale, because he had more rest than Sandy did. I loved Don, he was a battler and a great pitcher, but if the season was on the line for one last game you wanted Sandy out there on the mound. Most of the time, Sandy had an exceptional control with two pitches, but he shut down Minnesota that day with just his fastball. Drysdale was a very good pitcher, but Sandy was one of the best. We were not a hitting powerhouse, so we needed those arms and the bullpen with Ron Perranoski and Bob Miller was awesome.”

“I was in both of those World Series in 1965 and 1966. They gave me a ring after winning it in 1965, and the next year we got beat by the Orioles and they gave us Rolex watches for winning the National League. A few years later, I lost the ring, but they let me buy a replacement for around $600. But I don’t wear it anymore, in fact—I gave it to my son. I also have a 1975 ring from the Red Sox and one from the Phillies in 1993, while I was a minor-league manager and a scout.”

“(Jim) Bouton and I were good buddies, but I would not say that we were close friends. None of us knew that he was writing a book, let alone Ball Four. Years later, someone asked about the greenie story at a banquet and I told them what Bouton left out of the book was the part where I was joking about greenies. The team wasn’t happy with a lot of what Bouton wrote in that book, because most of us felt violated. They were shocked that he could write those things about Mickey Mantle and about other players. Now, if you compare Ball Four to other stuff out there now, it’s pretty tame, that’s for sure.” e or my tongue might get sunburned.” “I was so tired last night I fell asleep in mid-sentence.” “I have so many splinters from sitting on the bench that if somebody struck a match, I might catch fire.”