“Someone told me that when I get my contract, don’t sign it…so I sent it back. I wasn’t aware of the fact that the Reds GM was Gabe Paul, who was known for being tough and cheap. A few weeks later, I got a letter from Paul and he said, ‘I’ve never been so insulted in all my life. You’re sold to Seattle!’ Oops. The lesson is don’t take bad advice.” 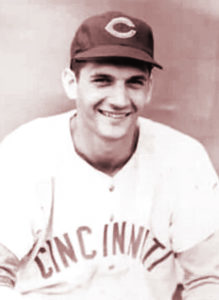 John Oldham played in only one game in Major League Baseball as a pinch runner, but he made a name for himself as a winning and much-loved coach at the high school, junior college, and college levels.  A star pitcher at Campbell High School and San Jose State University, Oldham spent five years in the minors, before his brief appearance for the Cincinnati Reds in 1956. In 1959, Oldham took up coaching and guided his alma mater, Campbell High, to three championships. Oldham then spent the next 18 seasons at San Jose City College, where he led his teams to 390 wins and five conference titles. In 1985, he continued his winning ways at Santa Clara University, posting a 433-324 record in 13 seasons, including conference titles in 1994, ’94, ’96 and four appearances in the NCAA playoffs. John Oldham was inducted into the San Jose Sports Hall of Fame in 2008.

On Making a Bad Decision:

“Someone told me that when I get my contract, don’t sign it—just send it back because they always try to low-ball rookies. I didn’t know any better, so I sent it back. I wasn’t aware of the fact that the Reds GM was Gabe Paul, who was known for being tough and cheap. A few weeks later, I got a letter from Paul and he said, ‘I’ve never been so insulted in all my life. You’re sold to Seattle!’ Oops. The lesson is don’t take bad advice.”

On Life in the Pacific Coast League:

“The teams were very competitive and we played a lot in front of sold-out stadiums. Coming out of spring training in 1955, I made the Seattle team, an independent that was managed by Fred Hutchinson, who later became the Reds manager. I pitched well there (9-6 record over 35 appearances) and we won the league going away. The fans were great in Seattle; they loved their baseball in the Pacific Northwest and it was fun to play for that team. I enjoyed contributing to the team’s success and we got to places like San Diego, L.A., the Bay Area—it was probably my best year.”

On Another Shot at the Majors:

“The Reds were pleased with my performance in Seattle, so Cincinnati repurchased my contract at the end of the 1955 season and signed me to a contract in excess of $5,000. Back in those days, if you signed a contract for more than $4,000, they had to carry you on their 25-man roster and that’s why I was with the big team in 1956.”

But Then The Military Called:

“Right in the middle of Spring Training, I got a draft notice and I had to report to San Francisco to be inducted into the Navy, and then I was sent to San Diego. I got to play baseball and it was great, and before the season was over, I got released by the Navy on a medical discharge and rejoined The Reds.”

On The Benefits of Having a Gorgeous Wife:

“While I was at San Jose State University, I kept hearing about this beautiful girl named Maryann. The guys would hang out on the quad waiting for her to walk by and everyone went crazy. When I first saw her, I said wow—she looks like a Hollywood star—she is amazing! Well, I ended up marrying her while I was in the Navy and we’ve been married now for more than 60 years. Having an attractive wife has its advantages. When we were looking for a place to live in San Diego, this one manager said he had no vacancies, but then when he saw Maryann, he quickly changed his tune. One day, I came home and the apartment had new drapes and a new refrigerator, and I knew he wasn’t doing it for me!”

On His Sip of Coffee:

“It was in early September (9-2-1956) and we were playing the Cubs at Crosley Field. In the bottom of the third inning, George Crowe singled in Eddie Robinson with one out to tie the game at 1-1, and then our manager Birdie Tebbetts put Ted Kluszewski into the game to pinch-hit for our third baseman Alex Grammas with two outs and runners on second and third. Klu hit a single and two runs scored. Then out of the blue, Tebbetts told me to pinch-run for Kluszewski. I was definitely excited but also scared at the same time. Don’t get picked off, I told myself. Our shortstop Roy McMillan popped out and I returned to the bench. I never imagined that would be the end of my MLB playing career. After that, I was sent to the bullpen to warm up as a possible reliever, but they never put me in. The games were close, so I guess Tebbetts decided to go with someone a little more experienced. Years later I figured out that they didn’t put me in because Gabe Paul was still upset about when I mailed back that contract.”

On How It All Ended in Visalia:

“It was 1960, and my arm was done. I was married and had a kid, so I had to make a business decision. I walked out of that ballpark and saw my wife and my child sitting in the car and I said, ‘This is it, we’re going home’. I got my teaching credential and when I got home, I discovered that Campbell High School had an opening and they hired me. In five years at Campbell High, we won the league four times and finished second once. My best player during that time was Craig Morton, who went on to be a star quarterback for Cal, the Dallas Cowboys and Denver Broncos.”

“I got hired at San Jose City College, and I took that team to five conference championships in 18 years and produced four Major Leaguers—David Stieb, Jack Pierce, Randy Kramer, and Dave Righetti.”

On Coaching Division One:

“After a few false starts, I finally got the job at Santa Clara University, where we won four conference crowns and produced four more big leaguers—Randy Winn, Mike McFarlane, Greg Gohr, and Ed Giovanola. We never made it to the College World Series, but I was there for 13 seasons and I loved it.”