“I started getting booed a lot around 1980. So, I was laying in bed one night and my wife sat up and said, ‘You should just change your name to Boo!’” 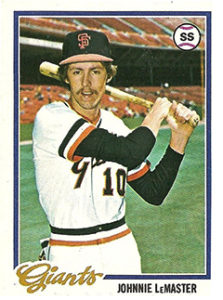 Johnnie LeMaster was the prototypical 1970s infielder: Skinny but agile, fast but powerless.

Johnnie LeMaster played for four teams over 12 seasons (1975-1985 and 1987) 10 of them for the San Francisco Giants. On September 2, 1975, LeMaster set a major league record, hitting an inside-the-park home run in his first at bat during a 7–3 win over the Dodgers. Two years earlier, Brian Downing had become the first MLB player to hit his first homer inside the park—but not in his first at bat. LeMaster hit only 21 home runs during the rest of his career consisting of 3,191 at bats. Many fans will long remember LeMaster for one game in 1979 when he took the field wearing the phrase on his back that Giants fans often welcomed him with. In place of his last name was the word “Boo.” In 1983, LeMaster amassed over 100 hits for the only time in his career, batting .240 and finishing seventh in the National League with 39 stolen bases. In 1985, he played for the Giants, the Cleveland Indians, and the Pittsburgh Pirates—and all three teams ended up in last place in their respective divisions. LeMaster was a career .222 hitter with 22 home runs and 229 runs batted. He currently resides in Paintsville, Kentucky, where he serves as an elder for the Paintsville Church of Christ.

On His First At-Bat:

“We were playing at Candlestick and they had artificial turf back then. I wasn’t even scheduled to play that game against the Dodgers, but our starting shortstop Chris Speier got hurt and I figured, they won’t put me in. We had a lot of utility type players on that Giants team in ’75 and I thought for sure our manager Wes Westrum wouldn’t call on some rookie, but he did. So, I got up there and Don Sutton was pitching. The first pitch he throws me was a big curve and I had no chance of hitting it. Some fan in the stands yells, ‘Hey kid, this is the big leagues!’ The next pitch was the same, and I swung and missed again. The same fan yells out the same thing, and I’m thinking to myself, no kidding, I’ve never seen a pitch like that! But, the next pitch was a fast ball and I hit a line drive up the middle. It hit a seam on the field and the ball jumped over the centerfielder’s head. I started running like crazy and I got an standup inside-the-park home run. I thought, man—this is easy!”

“He was quite a character and fun to be around. One year, he predicted that he was going to strike out Johnny Bench four times. He did it three times, but not four. He struck out Bench the first three times up and then the fourth time old Johnny hit one up into the second deck. Later Fusco pitched a no-hitter and I played in that game. I only saw two no-hitters during my career—that one and another one that got pitched against us by Jerry Reuss of the Dodgers.”

“It was our home park whether we liked it or not, so we had to try and use it for our advantage. It was probably the toughest place to play in the history of baseball. It was a shock for me the first time, because I was coming from Phoenix (the Giants’ Triple-A team) where it was 100 degrees every day and suddenly I was playing in the wind and cold. At night, you had to wear extra clothes, hoping that you might work up a sweat. I saw visiting players like Davey Concepcion and Ozzie Smith and other great players leaving that park shaking their heads. One game there, it’s hard to explain how hard the wind was blowing. We were playing the Reds that night and in the first inning Mike Ivie hit a popup that looked like it was headed for left field. But that wind pushed the ball way over to the dirt around shortstop—that’s how far that crazy wind moved it! No one laid a glove on it. Candlestick was hell for some visiting players. I tell people that Bob Horner (Atlanta Braves) hasn’t caught a fly ball there yet.”

“Playing with Mac was a pleasure and an honor, that’s for sure. He was a team leader and a great guy to have in the clubhouse and that was his role. He was a gentle giant, but don’t get him mad. He wasn’t real loud, but he could put you in your place if he wanted to. We had a rookie and I can’t remember his name, but he didn’t last long in the majors. One night, we were ahead by a lot of runs and this kid was on first base with McCovey at the plate. This rookie stole second base in the ninth, which is not cool. You never steal or bunt when you’re way ahead in a game in the late innings and everyone knows that. This kid stole the base on his own, and the pitcher hit Mac in the ribs with the next pitch, which he should have. When McCovey came into the dugout after the inning, he grabbed that kid by the neck and told him that you ever do that again I’ll kill you. It was a lesson he needed to learn anyway.”

On the Giants’ Crazy Uniforms and the Crazy Crab:

“Yeah, people called those uniforms pajamas and next to those old Houston Astros uniforms, they were definitely one of the worst in baseball. They were different, that’s for sure. And then the Crazy Crab mascot was something else. He caught on for a while, but then the fans eventually turned on him. The team wasn’t playing very well and they took it out on him. After a few months, they were throwing cans and bottles at the guy. I used to talk to him all the time and he was a great guy, but the whole Crazy Crab thing just never stuck and he was gone before the next season.”

On the “Boo” Incident:

“I started getting booed a lot around 1980. So, I was laying in bed one night and my wife sat up and said, ‘You should just change your name to Boo!’ I didn’t think nothing about it, but a couple days later, I asked our equipment manager to make me up a jersey with “Boo” on the back of it. He did, and it took me a couple weeks to build up the nerve to wear it. I snuck into the clubhouse right before the game and put it on and the only one who knew I was going to wear it was a teammate named Rob Andrews. Joe Amalfitano was our manager and he couldn’t see real good without his glasses, so he didn’t notice it. So during the first inning, someone said to Joe, what’s that on LeMaster’s jersey, Bob? I only wore it for three outs. Our General Manager Spec Richardson saw it right away and immediately called down to the clubhouse to fire our equipment manager. Later that night he re-hired him, but Spec had the kid scared to death. After the half-inning was over, Richardson was there waiting for me with my normal jersey and he looked mad. ‘Put this on right now!’ he said. After the game was over, there was a note in my locker that said I had been fined $500 for not being in uniform. I’d have to say it won the fans over and the reporters were all over me about it, because they love a good story. I started getting booed a lot less after that. I’ve been asked several times by the Giants to return for events over the years and I always do. When I go on the field now, it’s more of a gentle boo, because all the fans remember. I still have that ‘Boo’ jersey and collectors from New York call me all the time wanting to buy it, but I can’t part with it.”

“My biggest one is never playing in a World Series. It’s the pinnacle for every player and what we all dream about. Every player wants that World Series ring. We had great fans in San Francisco and one of the things we always wanted to do was win for them and give them some bragging rights, especially against the Dodgers. Watching L.A. win it all in 1981 just ate us up. It was painful. Most of the Giants teams I played on didn’t have enough pitching. I don’t want to blame them, because they always did their best, but we didn’t have enough good arms most of the time, and you can see the statistics, they don’t lie. We looked good on paper, but you can’t play the game on paper.”

On the Best Pitcher he Ever Faced:

“J.R. Richard without question. All of the Dodger stars hated facing Richard. He owned that team and all he had to do was throw his glove out there and he’d win. Ron Cey, Davey Lopes, Bill Russell—all the stars on that team except for Garvey took the night off when Richard was pitching against them. He was as close to unhittable as any pitcher I ever faced and he could put you in a hitting slump real fast, that’s for sure. Some of the great pitchers I remember were Tom Seaver, Steve Carlton, Andy Messersmith and Jerry Koosman—they were all tough pitchers.”

On Hating the Dodgers:

“They teach you from the very first day that hating the Dodgers is a priority. Right after I got drafted by San Francisco, the coaches sat down with all the new guys and told us we could lose every game, except not against the Dodgers, because we hate them. It was Hank Sauer and Carl Hubbell, both deceased now, and they told us that hating the Dodgers was something we needed to understand.”