“I know Lefty would be so proud and happy to see all of the great Japanese players in the majors right now…I hope people remember what Lefty did for that country and is baseball. I believe it’s his legacy.” 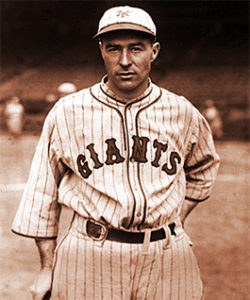 After a failed first stint in the majors as a pitcher, Lefty O’Doul returned at age 31 as a dangerous hitter and finished his career with a .349 batting average.

Francis Joseph “Lefty” O’Doul (March 4, 1897-December 7, 1969) was a Major League Baseball player who went on to become an exceptionally successful manager in the minor leagues, and also an important figure in the birth of professional baseball in Japan.

Born in San Francisco, O’Doul began his professional career as a left-handed pitcher with the minor league San Francisco Seals of the Pacific Coast League. After some major league success with the New York Yankees and Boston Red Sox from 1919 to 1923, he developed a sore arm which relegated him to relief duties. Returning to the PCL, he turned into a power-hitting outfielder. The New York Giants brought him back to the majors in 1928, where he batted .319 as a part-time player.

O’Doul was traded to the Philadelphia Phillies in 1929 and, teaming up with Chuck Klein, had one of the best offensive years in baseball history, leading the National League in batting at .398 with 254 hits, 32 home runs, 122 runs batted in, and 152 runs scored. He continued to play well for Philadelphia but was traded to the Brooklyn Dodgers in 1932, where he batted .368 to win another NL batting title before ending his career back with New York in 1934.

Returning to the PCL, O’Doul became manager of the Seals from 1937-1951 and later managed several other teams in the circuit to become the most successful manager in PCL history. One of his outstanding accomplishments while managing the Seals was developing the young Joe DiMaggio, who went on to a Hall-of-Fame career with the New York Yankees. O’Doul refused to take credit for DiMaggio’s success, saying “I was just smart enough to leave him alone.”

O’Doul was instrumental in spreading baseball’s popularity in Japan, serving as the sport’s goodwill ambassador before and after World War II. The Tokyo Giants, sometimes considered “Japan’s Baseball Team,” were named by him in 1935 in honor of his longtime association with the New York Giants.

The fame and popularity of O’Doul lives on in his hometown of San Francisco. The popular restaurant and bar he founded still operates as Lefty O’Doul’s Restaurant and Cocktail Lounge on Geary Boulevard, and still serves his original recipe for Bloody Mary (albeit secretly modified in the 1960s by O’Doul’s bartender Chuck Davis, who remains at the bar as of 2009). A bridge over McCovey Cove, near the Giants’ home field of Oracle Park, is named the Lefty O’Doul Bridge in his honor.

I sat down at O’Doul’s restaurant, ordered an O’Doul’s and sat down to interview Tom O’Doul, Lefty’s cousin. Is that triple déjà vu or what?

On the Benefits of Being a Famous Cousin:

“I didn’t really know who Lefty O’Doul was until I started playing baseball in Little League. Until then, he was just my cousin. When I started playing ball, he started coming around more. One story I love to relate is that Lefty always came to my opening days when I was playing Little League. In 1954, opening day was approaching and my dad told me, ‘Cousin Frank’s coming to your opener.’ And I thought, that’s cool. It was an opportunity for me to walk around and be proud for my cousin, a former major leaguer. So he shows up in a Cadillac with Joe DiMaggio. I’ll never forget the moment, because everyone’s mouth just dropped and stay opened. There was a buzz in the air. But, they were gone five minutes later. I lived off that moment for the next five years, at least.”

On Why Lefty Loved Japanese Baseball so Much:

“Probably because the way they played the game. I think he liked the purity of it. He appreciated their dedication to the game. They’re very humble people; they’re very polite and I believe he respected that. He was a teacher and a great coach above all, and the Japanese were starved for coaching and knowledge about how to play the game. He actually brought Japanese coaches here to the United States to teach them. And they were extremely pleased to learn from the ‘Great American.’ Lefty was the one who brought Babe Ruth to Japan. They were dying to see Babe and he brought them on his first tour there in 1934. He did three tours to Japan total—in ’31, ’34 and ’49. He’s influenced baseball in Japan in so many ways. In fact, the Tokyo Giants are named the Giants because of their connection with my cousin, who of course played with the New York Giants. In 2002, Lefty was chosen to be in the Japanese Baseball of Fame. He was elected by a special committee. I know Lefty would be so proud and happy to see all of the great Japanese players in the majors right now, like Ichiro and all the others. Lefty envisioned an international game. I hope people remember what Lefty did for that country and its baseball. I believe it’s his legacy.”

“He never made it past the seventh grade and he would always push me to finish school, he said. ‘At least graduate from high school,’ he said. He had to drop out of school to go to work as a butcher. His father, his grandfather and his uncles were all butchers. If he hadn’t made it as a baseball player, he would have been a butcher his whole life. People could see right away that Lefty had baseball talent. He had the hand coordination, the great vision and the instincts you need to make it to be a good player. He could play any position he wanted to. In ’37, he was the MVP in the Pacific Coast League as a pitcher. They said he hurt his arm after that year for throwing too hard, but I believe he injured it lifting one too many beers. There was nothing he couldn’t do in the game.”

On Lefty’s Relationships with Other Great Players:

“O’Doul got along with everyone, including Ty Cobb, which wasn’t easy from what I heard. He loved Babe Ruth and they spent a lot of time together. They both had that great sense of humor, so that’s probably why they got along so well. He was one of those guys who didn’t have a lot of enemies. He wasn’t enamored with most of the umpires and he had no problem telling them if he thought they blew a call. He got threw out of his share of games. But, back then they rode the umps a lot more than they do today.”

“It’s from an original O’Doul family recipe and they’ve served it there since day one. We’re a drinking family and we’ve always been a bunch of drinkers. The O’Doul’s drug of choice is alcohol. Lefty drank bourbon and water and beer. I remember sitting in our yard with my father and my uncle and he was drinking beer. But he liked his bourbon, I remember that. He drank Acme beer in the 1950s. It was a San Francisco beer and he preferred it. My uncle loved being in bars and talking to people in bars, so opening his own restaurant/bar in his hometown was a logical progression. He loved being a restaurateur and he was very good at it.”

Thanks to Wikipedia, www.baseball-reference.com and www.sabr.org for contributing information that was used in this article.