“Back then, there weren’t a lot of ancillary activities going on—like all the soccer, the video games, the Internet and skateboarding that goes on today. Baseball was the big thing and every kid pretty much played ball.” 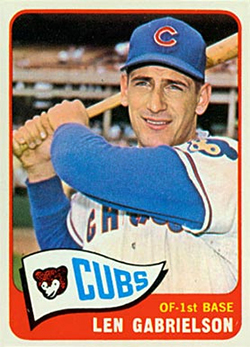 Although shown here in the uniform of the Chicago Cubs, the Oakland-born Len Gabrielson played for numerous West Coast teams including USC, the Giants, Dodgers and Angels.

Len Gabrielson was an outfielder who played for the Milwaukee Braves, Chicago Cubs, San Francisco Giants, California Angels and Los Angeles Dodgers from 1960-1970. He graduated from the University of Southern California and was signed by with the Braves in 1959 as an amateur free agent.

After parts of three seasons with the Braves, he was traded to the Cubs in 1964, in exchange for catcher Merritt Ranew and $40,000. Two weeks later, the Cubs traded their starting right fielder Lou Brock to the St. Louis Cardinals, and installed Gabrielson as Brock’s replacement.

He lasted less than a year with the Cubs, moving on to the Giants in a five-player deal in 1965. The Giants received Gabrielson and catcher Dick Bertell, surrendering fading stars Harvey Kuenn and Ed Bailey and pitcher Bob Hendley. Gabrielson gradually worked his way into a role as the team’s starting left fielder, a role he successfully defended during spring training of 1966, beating back a challenge by star Orlando Cepeda—who had been displaced from first base by Willie McCovey. He struggled with the bat that season, however, and in December was traded to the Angels for another declining star, first baseman Norm Siebern.

Gabrielson’s stay with the Angels lasted all of 11 games, as the Angels sent him to the Dodgers for Johnny Werhas in 1967. It would be the final trade of Gabrielson’s career, as he spent the next four seasons with Los Angeles. He led the team in home runs with ten in 1968, an unusually low total made possible by league-wide offensive declines that season, the so-called “Year of the Pitcher.” Len’s father was also a MLB player, having spent part of the 1939 season with the Philadelphia Phillies.

“My whole family was involved in professional baseball. For example, my uncle (Bill Matheson) played in the Pacific Coast League in the 1930s and 1940s, playing for the San Francisco Seals. My dad signed out of Oakland Tech High School by the Yankees in 1931. So, baseball was always a big part of my life from both sides of the family. I started playing when I was five years old. We were blessed because we had the Oakland Oaks’ ballpark right down the street from us on San Pablo Avenue, so we would go down there on a pretty regular basis, which was a treat for a young child. The Oaks always had programs for youth, so on the weekends we were down there. After the war, my father tried to play baseball again, with Seattle and Hollywood in the PCL, but it did not work out. But, because he still knew everybody, it made it fun to go to the Oaks’ games and hang out. I loved overhearing conversations he had with players like Billy Raimondi, George Metkovich and Spider Jorgensen. It was a wonderful environment to grow up around baseball in the Bay Area.

We didn’t have Little League per se back then, so I played in a thing called Police Athletic League (PAL). I played on those teams and then followed by playing in the Babe Ruth League and later American Legion baseball. That’s where I cultivated my early baseball career. We had a phenomenal group of baseball players in Oakland during those years, because it was an ideal place to play and practice. We had great fields; the enthusiasm, the pro teams and the facilities. Back then, there weren’t a lot of ancillary activities going on—like all the soccer, the video games, the Internet and skateboarding that goes on today. Baseball was the big thing and every kid pretty much played ball. I played with people like Frank Robinson, Curt Flood and Vada Pinson, Ernie Fazio, Jesse Gonder and Charlie Beamon, just to name a few. Baseball was my #1 sport for a lot of reasons. I went out for the basketball team at Oakland Tech three times and got cut each time, so baseball was my logical choice.”

On the old Pacific Coast League:

“One day, some guy came to the house and I didn’t who he was. It turned out to be Rod Dedeaux, the baseball coach at USC, who had played many years before with my dad. They were hugging on our porch and I had no clue. An introduction was made and Dedeaux said I heard your son has committed to play baseball at Cal, which was true. Back then it was more informal, not like today with letters of intent. So, Dedeaux said, ‘I’d like to have Len come down and check out USC.’ I said okay, but I’m still going to play baseball at Cal. I had never been to Southern California, so I agreed to get on a plane and go down there with him. It ended up being the proverbial rush job. Dedeaux had it all planned and before I know it, they were giving me the royal treatment. Long story short, I signed and played for USC during my freshman and sophomore years and it was one of the best decisions I ever made. Playing for Dedeaux was a huge part of my baseball career and he quickly became a member of our family.”

On Signing with the Milwaukee Braves:

“There were a couple of teams that were interested, but I eventually signed with the Braves by a scout named Johnny Moore, who also had signed Eddie Matthews and Del Crandle. I went to spring training with the team in Bradenton, Florida. Can you imagine at the age of 20, I was on the field with future Hall of Famers like Hank Aaron, Eddie Matthews, and Warren Spahn and Phil Niekro, as well as Joe Torre, Denis Menke, Denny LeMaster, Mack Jones and Tony Cloninger, who were all in my first-year group and, of course, they all made it to the majors and had some exceptional careers. I did not make the big team that year, however. We all got shipped out to Wake Cross, Georgia. That team was loaded with talent, because they had some great scouts.

I do recall one thing in particular from that spring training. Warren Spahn and Lew Burdette were known for being practical jokers—real fun people to be around. They loved the baseball environment and everything that went with it. The team’s traveling secretary was named Donald Davidson, a really wonderful guy. He was short in stature and actually required extensions on his car’s pedals so that he could reach them. One day, Spahn and Burdette decided to remove Davidson’s extensions so that he could not drive his vehicle. In response, Davidson did a bunch of things to get back at these jokers. So, it was a fun time, but the players were also very serious.”

On Racism in Baseball:

“When I was playing in the Sally League in the South during my second year in the minors, I heard a lot of stories about the black players being treated poorly in some of those cities, which surprised me. I grew up in Oakland, where I lived and played baseball with black people, so I never differentiated people by their color. Later, fellows like Henry Aaron, Ernie Banks, Willie Mays and Willie McCovey told me about how they were required to eat and live in places different from the white players. I’ve read a lot about the Negro Leagues and how so many talented men were not allowed to play this great game in the major leagues. And it’s a travesty—definitely a black eye on the history of baseball. I do remember a real culture shock when I played my first game in Jacksonville, Florida. I came out of the dugout and on to the field, and from home plate down the first base and third base lines was where the white people sat. Then there was an empty space in the stands, followed by where the black people sat. I couldn’t understand the implications of that or the reality of it at the time—that this was the policy here, and it wasn’t just an accident for why they were sitting this way. This is the way it is, I thought and I was shocked.”

On being Traded to the Giants:

“Oh, it was wonderful playing on that team, with Mays, McCovey, Marichal, Gaylord Perry, Tom Haller—I made so many friends on that team. Can you imagine playing with these guys? Most players can only dream of that and I was there. It gave me the opportunity to play in front of my family and friends, so it was a great experience. Playing in Candlestick Park wasn’t a thrill, but you can’t have it all, right?”

On being Traded to the Dodgers:

“I spent four years with the Dodgers and it was magnificent. The stadium was the antithesis of Candlestick, like an oasis in the middle of L.A. And Walter Alston was the consummate manager—the way he handled players; his regard for his players—he didn’t motivate players through intimidation, like many managers did. But, with his size and the way he carried himself, no one messed with the man. When the younger players came up—Bill Russell, Steve Garvey and Davey Lopes—that was the new generation of the Dodgers, and I was at there at the very beginning of that.”

“Willie Mays sold cars in Burlingame. As I recall, Willie McCovey worked for a uniform company—everyone worked. It was a different era. You didn’t make that much money, so you had to work. We all had second jobs. For seven years, I worked for a company called Foremost McKesson in San Francisco. I worked in their International division, where I learned about things such as corporate life, including new product development, contracts, marketing, sales, etc. I was so lucky for the opportunity and I took full advantage of it.”