“The baby was born at five in the morning and I showed up (to the game) afterwards…I had no business being out there, but I did anyway. And almost immediately I made an error at shortstop. I kicked the ball and then threw it over the first baseman’s head. Then, they hit me another grounder and I did the same thing again!” 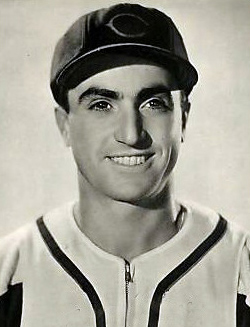 A shortstop for seven years, Lennie Merullo was the last surviving member of the 1945 Cubs—the last time the team made the World Series until 2016. In a seven-game defeat to Detroit in the Fall Classic, Merullo was hitless in two at-bats.

Lennie Merullo played shortstop for the Chicago Cubs for seven years during the 1940s, including their pennant-winning 1945 squad; he was the last living ex-ballplayer who played for the Cubs in a World Series until the team returned to the Fall Classic (and won) in 2016. Merullo’s major league career began in 1941, and in 1942-45 he was a starting shortstop. In 1946, Billy Jurges, Bobby Sturgeon, and Merullo shared the position until Merullo won it back again in 1947. During this period, Merullo was known for having the quickest throwing arm in baseball. After retiring from this great game, Merullo was the chief scout for the Cubs from 1950-72, signing among others relief pitcher Moe Drabowsky. He left the Cubs in 1973 to join the then-fledgling Major League Baseball Scouting Bureau, where he served with distinction until his retirement at the age of 85 in 2003. Merullo was named to the Hall of Fame of the Cape Cod League, having led the Barnstable Townies to the old Cape League title in 1935. He was awarded Scout of the Year in 1990, and was given the prestigious Judge Emil Fuchs Award for long and meritorious service to baseball in 2006.

“At 15 years old, a scout gave me a real uniform and I was allowed to work out on a major league field. It was a great thing to be able to do. It was a thrill you can’t believe seeing all the players out there that I had idolized. In 1935, I walked out on the Boston Braves’ field and there was Babe Ruth. He was at the very end of his career and the Braves had signed him to bring in more fans. I’ll never forget seeing Babe Ruth out there, and in a way I wish I hadn’t seen him, because he was totally overweight and he looked terrible. He was fat and for a minute I thought, is that Babe Ruth? He always had a crowd around him and people were always asking him questions. He was great with the young players. I gathered around like everyone else and listened to everything the Babe had to say. That was a big day—there was Babe Ruth and there’s only been one Babe!”

“Back then, you had to get close to a prospect, because there was a lot of competition for the better players. When I found Moe Drabowsky, I made up my mind that I was going to camp out wherever this kid was until I got him signed. I was very focused on getting him signed and that was that. I would just hole up whatever town he was playing in. In fact, I followed him all the way to this little town in Nova Scotia, about as far East as you can go and still be on the North American continent. He was playing down there and I set up down there. I let him drive my Chrysler station wagon and got very close to him; because that was the way you had to do things back then in order to sign these blue chip kids.

I figured if I got close to him, I would have the inside track when he was ready to sign and it worked. His family was Polish and Roman Catholic, so I made sure I went to every one of those Sunday masses and I made sure they saw me there. Sometimes I would have to go to the 7 a.m., 8:30 a.m. and 10:00 a.m. masses, just to make sure they saw me there, praying for their son to sign with me! (Laughs.) Everybody wanted Drabowsky, you kidding me. The first time we took him to Wrigley to show him off, he started throwing and everyone was in shock. He had a nice, easy smooth delivery, and a vicious fastball and the kid had a great attitude.”

On Dizzy Dean and Jimmie Foxx:

“When I played with him in Chicago, Dizzy was at the tail end of his baseball career, but what a pleasure it was just to be around him. All of us enjoyed basking in his limelight, because he attracted a lot of fans and other players from other teams—they all loved Dizzy. And we benefitted from it, because the fans would bring him gifts all the time. Mostly food—watermelon and fried chicken and homemade pies and cakes! They treated him nice and he shared everything with the rest of the team. He was very popular and there was always a fanfare surrounding the fella, that’s for sure. It was like watching the circus and he was the ringleader. He won three games for us that year and all three were complete games. He didn’t have his old skills anymore when the Cubs got him, but he could win with his brains and experience. I loved being around him.

As for Foxx, we got him to add a little power to the team and he was also a very popular player. He wasn’t as vocal as Dizzy, but he was also a pleasure to be around, because he was so talented and was willing to share hitting pointers with some of the younger players, which was nice. Some veteran players were known for being aloof and self-centered, but not Dean or Foxx. They were great to be around and I talked to them as often as I could, without being a pest, you know.”

“Wrigley fans are exceptional and some of the best in the game. I’m from Boston and they have great, knowledgeable fans there, but Chicago fans are just as good or maybe even better. They knew all your stats and a lot of them built relationships with the players. I knew many of their families and stayed in communication with many of them after I retired as a player. There are only two players still alive from that 1945 pennant-winning team and I’m one of them. (Andy Pafko’s death in October 2013 made Merullo the last surviving member of the 1945 Cubs.) I hope the Cubs can win a World Series here at some point, at least while I’m still alive, because I love those Chicago fans.”

On the Birth of his First Son:

“I was on the road somewhere playing and my wife was expecting, so after the last road game of the current trip, I took a bus to Boston, where we were living. They wanted me to take a train, but the bus was going to get me there quicker, so I took the bus. The baby was born at five in the morning and I showed up right afterwards. I was so proud—my first boy! So, now I am exhausted by all the travelling and lost sleep, but I decided to play that day. I had no business being out there, but I did anyway. And almost immediately I made an error at shortstop. I kicked the ball and then threw it over the first baseman’s head. Then, they hit me another grounder and I did the same thing again! Four errors in one inning, can you believe it? The next day, the paper said, ‘Boots Bronzed as Merullo Boots Four.’ So, they gave my first son the nickname ‘Boots.’ He’s in his 70s now and they still call him that!

As far as I know, four errors in one inning is still the record—and I don’t think it’s going to be broken anytime soon. I played during a time of great shortstops—Pee Wee Reese, Marty Marion, Billy Myers—all playing in the majors at the same time. Sure, I was pretty erratic, but every once in a while I would make an amazing play, because I had great range and a pretty decent throwing arm. I was as quick as anyone, but known for being a little inconsistent—that was my reputation.”on the back of my uniform, I’m pretty sure well they won’t trade me!’ “Don Sutton told me to stand in the shade or my tongue might get sunburned.” “I was so tired last night I fell asleep in mid-sentence.” “I have so many splinters from sitting on the bench that if somebody struck a match, I might catch fire.”

On Pitchers and Spitballs:

“There were pitchers who owned me like (Tom) Seaver and Ryan and I’m not ashamed of that, because they were literally unhittable. But, there were others who I hit hard. I do remember a guy named George Culver who was a fine pitcher, but I got a few big timely hits against him that won us a couple games. I also recall that I hit very well against Gaylord Perry. One day I knocked Perry out of the game and he walked past me as I was standing on first and said, ‘That’s the last $%# hit you’ll ever get off me!’ Their catcher Dick Dietz told me that Gaylord was really upset and that I would never get anything to hit from him ever again. He was right, because all he threw to me after that was spitballs. The first time I saw them, I thought they were just really good sliders! The best spitball I ever saw was thrown by Bill Singer, my Dodgers’ teammate. He threw one during Spring Training to Hank Aaron and Aaron was like, ‘Are you serious?’ It came in chest high and by the time he swung at it, it was down around his ankles.”