“When I got back to Kansas City, most of the fans were very nice to me, but I could not face them. The winter was hard and every once in a while someone would rip into me…You know, I won and saved a lot of important games in my career, but I guess I will always be remembered for that one pitch, and what can I do?” 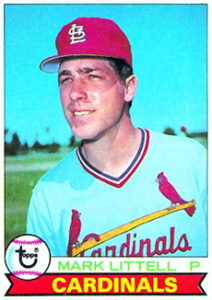 Mark Littell pitched from 1973-82 for the Kansas City Royals and St. Louis Cardinals, with a lifetime ERA of 3.32 and 56 saves from 1976-81. Bone spurs in his elbow cut his career short, and Littell retired midway through the 1982 season at the age of 29. Primarily a relief pitcher, Littell served as the Royals’ main closer for two seasons and is best remembered for giving up a walk-off home run to New York Yankees first baseman Chris Chambliss to end the 1976 American League Championship Series. It was only the second home run he allowed in more than 100 innings pitched that year. Two years later, the Royals dealt Littell, along with catcher Buck Martinez, to the Cardinals in exchange for relief pitcher Al Hrabosky.

On the Chambliss Home Run:

“Let’s talk about this first and get it out of the way, because everyone wants to talk about the home run I gave up to Chambliss is the 1976 ALCS. The Reds had already swept the Phillies and were waiting for us to join them in the World Series and we were as confident as we could be. Before the game, our manager Whitey Herzog came into the clubhouse and told us that after we won, we would be leaving early the next morning for Cincinnati, so be packed. And then he walked out of the room. The game was back and forth and then in the top of the eighth George Brett tied up the game, 6-6 with a three-run shot. He was so clutch, that guy, it was uncanny. The Yankee fans were not happy about Brett’s home run, so they started throwing stuff on the field, including batteries, bottles and even a few condoms, that’s right. Bob Sheppard, the Yankees’ PA announcer, asked the fans to stop throwing garbage on the field, but that just made it worse.

I was trying to keep us tied when Chambliss came up and I threw him a fastball that was a little up in the zone and he hit it out. We lost. The fans stormed the field and I got to the dugout as fast as I could. I remember Freddie Patek sitting there with an expression I can’t describe—total shock and despair. I went to hide in the shower, but then I came out and talked to the press. When I got back to Kansas City, most of the fans were very nice to me, but I could not face them. The winter was hard and every once in a while someone would rip into me. One waiter just lit into me and then they fired him right on the spot, so some people supported me through that time. You know, I won and saved a lot of important games in my career, but I guess I will always be remembered for that one pitch, and what can I do?”

On the Invention of the Nutty Buddy:

“For many years, the only thing on the market was the simple shell-shaped cup, but if the ball hit you in the groin, sometimes the old ones just didn’t do the job. The primary advantage to the Nutty Buddy is that it’s anatomically correct, which means that it’s more comfortable. Unlike traditional shell-shaped cups, the Nutty Buddy is wider, deeper and full of curves. At $19.95, the Nutty Buddy costs a little more than the traditional athletic cup, but parents aren’t afraid to spend more for a better product that will protect the family jewels (laughs). We gave them fun names—“Hammer,” “Boss,” “Hog” and for really big guys, the XL-sized “Mongo,” that we named after the character in Blazing Saddles.

At this point we have sold a lot of units over the Web, and now we’re marketing to hockey and lacrosse players, competitive bull riders, cops and even the female market, because they need to protect their privates too! I made my first prototype with a moldable plastic with splints and two golf balls and tested it. Then, to prove how well it worked, I let a pitching machine hit me in the groin with a couple fastballs while wearing it and I walked away, proving that the Nut Buddy is tough and it works. It was no different than a guy testing a bulletproof vest. I can now say that I literally stand behind my product!”

On his Moments in the Sun:

“I won the game for the Cardinals in which Lou Brock got his 3,000th hit and in another game, I struck out Hank Aaron looking at three straight pitches the first time I faced him—those are memorable moments. First, Hammerin’ Hank looked at my slider, and then a fastball, and then Buck Martinez called for another fastball and I hesitated, because this guy is the greatest batter on the planet and he was probably waiting for that fastball. But, Martinez was a very smart catcher, so I figured he must know something, so I threw it anyway and Aaron took the fastball for strike three. I always enjoyed pitching against the big power hitters because I owned a few of them and if you take a gander at my stats, you’ll see that it’s true. Mike Schmidt could not hit me (.133 in 15 at bats) and I also did well against players like Rod Carew and Carlton Fisk.”