“Everything came together in 2004 during my second season in San Diego…I won a Silver Slugger and played in the All-Star Game. It was an amazing experience. My locker was right next to Barry Larkin’s, a player I really respect. I looked around the locker room and I saw Pujols, Piazza, Bonds, Clemens—it was surreal.” 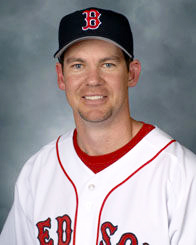 Mark Loretta played 15 seasons, from 1995-2009, for the Milwaukee Brewers, Houston Astros, San Diego Padres, Boston Red Sox, and Los Angeles Dodgers. He coached the Israeli national baseball team in the 2013 World Baseball Classic qualifier in 2012 and recently was bench coach for the Chicago Cubs for the 2019 season. He attended Northwestern University, and from 1991-92he played collegiate summer baseball with the Falmouth Commodores of the Cape Cod Baseball League. He’s a two-time All-Star, in 2004 with San Diego (.335 average, 76 RBIs) and 2006 with Boston (.285 average, 59 RBIs).

“Marathon Monday is a big deal in Boston. People watch the Boston Marathon and then come to the game for an early start. It was Marathon Monday in 2006, and the game went back and forth, but we were trailing the Mariners 6-5 in the ninth inning. Their closer Eddie Guardardo was out there and he got out the first two batters, and then Kevin Youkilis got a single. I hit a home run and the place went crazy. It was a nice way to end a special day.”

On Playing in Boston:

“I loved it. Everyone’s a fan and they’re very knowledgeable. I would go out somewhere and people would approach me all the time. ‘Hey Mark, you think we’re going beat the Yankees tonight?’ As a California kid, I really liked a lot of those characters. They have a long history in Boston and they really love their baseball.”

On His Biggest Hit:

“It was Game Two of the NLCS against St. Louis at Dodger Stadium in 2009. We were down 2-1 going into the ninth and we loaded the bases, thanks to an error by Cardinals outfielder Matt Holliday. With two outs, I hit a walk-off single off of Ryan Franklin and the place went absolutely crazy. It was a crucial game because it put us ahead two games to none, and I can safely say that it’s the biggest hit I ever had in my career. My second walk-off home run happened later in 2007, when I was with Houston and we were playing the Colorado Rockies. They intentionally walked Carlos Lee because he had hit a walk-off grand slam the night before. It made sense, but it also motivated me. When I stepped up to the plate, I thought it would be nice to hit a walk-off home run for the second night in a row and beat these guys and that’s exactly how it went.”

On a Future as a Manager:

“I was the bench coach for the Cubs in 2019 and I learned a lot from manager Joe Maddon. He is the real deal and one of the best people I know—a great leader, motivator and mentor. I was being considered to be the manager of the Cubs 2020, but the job went to David Ross, a very worthy candidate. I don’t know what I will be doing in the future, but I do like teaching and coaching—especially the younger, up-and-coming players. But, in the majors, there isn’t a lot of instruction except during Spring Training, and that’s one of the parts of the job that I really like.”

On His Best Year:

“Everything came together in 2004 during my second season in San Diego (200 hits, 16 home runs, .335 batting average). I was third in NL batting that year, behind (Barry) Bonds and (Todd) Helton. I won a Silver Slugger and played in the All-Star Game. It was an amazing experience. My locker was right next to Barry Larkin’s, a player I really respect. I looked around the locker room and I saw Pujols, Piazza, Bonds, Clemens—it was surreal. I went 1-for-2 with a single, so it was definitely a memorable night!”

On His Pitching Cameo:

“It was 2001 and I was playing for Davey Lopes with the Brewers. We were getting crushed by the Reds (who won, 11-3) and Lopes was looking for volunteers to pitch. I pitched in college, so I said I’ll give it a shot. I was pleasantly surprised when I pitched a scoreless eighth inning and held my own in the ninth. Some reporter told me that the last time a non-pitcher threw for Milwaukee was way back in 1991. It was a random thing, but I enjoyed it. Years later (in 2009) I also pitched a scoreless inning for the Dodgers, so my career ERA is 0.00.”

On His College Years:

“I was totally focused on going to Stanford and it looked very good. I was actually more concerned about playing time than I was about where I would go. Then I found out Stanford had a shortstop who they really liked, so I could see that I wouldn’t be starting at least for that first year. I liked the program at Northwestern and they said I could play every day, so it was an easy decision. We got into the Big Ten playoffs when I was there, but never made it to the College World Series. College was a wonderful experience and I was able to refine my game, so I’m happy that I spent those years there as opposed to spending it in the minor leagues.”

A Trade of Necessity:

“I got traded from the Padres to Boston in 2005 for Catcher Doug Mirabelli and the circumstances were a little unusual. When they traded him, they didn’t think about the fact that he was the only catcher on the team who could handle Tim Wakefield’s knuckleball. They thought that Josh Bard would be able to handle the job, but he had no clue catching that knuckler. Every other pitch was a passed ball. So, they panicked and did another trade with San Diego in May to get Mirabella back for Bard, and a pitcher named Cla Meredith and cash. Right after the second trade went through, Mirabelli got picked up at the airport 45 minutes before the game was to begin with Wakefield pitching. They did a police escort and rushed him to Fenway. They had his uniform in the car, and five minutes before the game started, he was catching Wakefield’s knuckler without wearing a cup, like our savior.”