“I went out there and got something like four hits, stole about three bases, I was running from first to third on ground balls through the infield and my teammates were telling me, ‘Slow down because you’ll hurt yourself. It’s just an exhibition game.’ And I told them, ‘not for me.’” 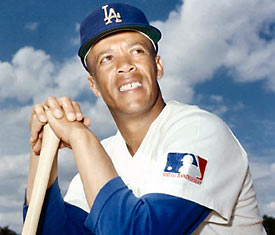 Maury Wills became one of the biggest basestealing threats of all time after being told by Dodgers manager Walter Alston he could steal at will.

Maury Wills was a switch-hitting batter, slick fielding shortstop, base stealing phenomenon who played prominently with the Los Angeles Dodgers(1959-66, 1969-72) and also with the Pittsburgh Pirates (1967-68) and Montreal Expos (1969). He was an essential component of the Dodgers’ championship teams in the mid-1960s, and deserves much credit for reviving the stolen base as part of baseball strategy. In a 14-season career, Wills batted .281 with 20 home runs, 458 runs batted in, 2,134 hits, 1,067 runs, 177 doubles, 71 triples, and 586 stolen bases in 1,942 games. He is a seven-time all-star and in 1962 won the National League’s Most Valuable Player award. As of 2009, Wills is a member of the Dodgers’ organization serving as a representative of the Dodgers Legend Bureau.

One player who changed his life:

“My high school was full of great runners; really fast guys who were much faster than me. They stuck me in the middle of their four-man relays, but I wasn’t fast enough to anchor. I played every sport, but baseball was always my favorite. Then one day everything changed when a professional baseball player showed up on our playground and he was from the Washington Senators. We didn’t know anything about the Washington Senators. No word ever got in or out of the projects back in those days. But this man had a nice uniform on, color coordinated with the piping down the sides of his pants; his shoes were clean and were shined up real nice; he had belt loops and he was well-groomed with clear eyes and he was white.

How he made it to our neighborhood I’ll never know. And we were like—wow, before this we used to idolize the guys in our neighborhood who played on the weekends, they called them semi-pros. They all had mismatched uniforms on. Argyle socks under their stirrups. And they all had a half pint of whiskey in their back pockets and they looked like they hadn’t slept all week. They were our heroes and we wanted to grow up to be just like them. We figured if we grew up and played on their team, we would be successful. They were hard-working men, many who didn’t have jobs and surely weren’t looking around for a job, guys who just played Negro-league style baseball on the weekends. That’s where I learned to play Negro league style, which involved a lot of running. It’s what they call ‘small ball’ today, but I call it baseball.

And then all of a sudden, here comes this white professional baseball player and his name is Jerry Priddy—you can Google him, and he died years later and I doubt he even knew how much he impacted my life as a kid. Years later as a Los Angeles Dodger, they used to ask us to go out into the community to talk to kids and some of my fellow players didn’t want to go. But, I always went and I’ll always go if people ask, because I am indebted to Jerry Priddy for what he did for me when he singled me out on that playground many years ago. Players would show up at these community events and then just stay for the agreed-upon minimum 20 minutes, but I was always thinking, Jerry Priddy didn’t leave after 20 minutes, he hung out with us for at least two hours. So, I would always stick around and usually I was the last player there.”

On Being Inspired by Jackie Robinson:

“In 1947, I started hearing a lot of talk in the projects about a man named Jackie Robinson playing for a team called the Dodgers. Oh, who is Jackie Robinson? Where’s Brooklyn? I started asking. They told me it’s in New York and I asked where’s that? So, I walked away and said to myself, I’m going to play for the Dodgers one day. That’s when I thought that I could be a major league player.”

On his MVP year:

“I won the MVP in 1962 and Willie Mays keeps reminding me that he should have won the MVP that year. This is 2010, and he’s still telling me about it. I told him, ‘Willie get over it, man.’ I always got the Dodgers that one run we needed and especially that season.”

On the New Kids Right Out of the Block:

“Ted Sizemore, Bill Russell, Willie Crawford, Alan Foster, Bill Sudakis and myself all came up around the same time. So, we used to hang out quite a bit. Some reporter started calling us ‘The Mod Squad’ after the TV show. We were flashy dancers and the nickname stuck. I started off hot in my first game against the Braves, with three hits and three RBIs, but after that I got into a bad slump and in June I got sent down to Spokane after they got Maury Wills back.”

On the Brooklyn Dodger vets:

Those early years of the Los Angeles Dodgers featured guys like Duke Snider, Carl Furillo and Gil Hodges, but by that time they were even more distant and intolerant of the wave of younger players coming in. They were a whole different breed of cats coming from Brooklyn. Different players from different eras have varied approaches to the game, but these guys were not what you’d call warm and fuzzy. I’m not saying they weren’t good people, but they sure couldn’t be categorized as nice people, you know? They were grumpy and standoffish in many ways. They wouldn’t help you or hang out with you. On that team you were on your own—you either made it on your own or failed on your own on that team. I have a good friend from that period—his name is Don Newcombe—and he’s still grumpy to this day. Gilliam was aloof, but a little nicer than the other ones.”

On Walter Alston and Sandy Koufax:

“Walt Alston was a gentleman and very dependable, but he was a no-nonsense guy, but he didn’t say many words and I can’t remember really seeing him smile or laugh much. He was all business, just like many of his veteran players. A good friendship developed over the years between me and Sandy Koufax. When he had arm trouble, he would stay after the games to ice down his arm, and I’d be there too icing down my legs. So, we spent a lot of time together all alone in the clubhouse, just he and I. Sometimes we’d have to find a security guard to let us out of the stadium, because it was all locked up. So, that’s how we became friends and developed a lot of trust. To this day, I have Sandy’s cell phone number and I don’t think many people have it, because he’s a very private individual.”

On the one game that changed his life:

“For a long time, I was batting eighth for the Dodgers. Batting ahead of the pitcher is not a great spot to be in to use your speed and my base running and base stealing abilities. And my bat wasn’t anything to write home about, I had to be a disciplined fielder and things like that to impress them and stay in the lineup. Pee Wee Reese used to take me out at least five days a week to work with me on my fielding—hard, hard, hard. So, then in early July that season (1960) we went to Spokane, Washington for the Dodgers on an off day to play their AAA team there. I had played for that team the year before and I maintained my family there, so a big crowd came to the game. I was in the clubhouse getting ready when Alston came back and said, ‘This is a big crowd and I think they came to see you. Why don’t you lead off?’ I was in shock. And he said ‘yeah’. And then as he was leaving the clubhouse, Alston turned back around—now mark this moment because it changed my life—and he said, ‘And don’t wait for the steal sign, if you wanna go, then just go!’ I went out there and got something like four hits, stole about three bases, I was running from first to third on ground balls through the infield and my teammates were telling me, ‘Slow down because you’ll hurt yourself. It’s just an exhibition game.’ And I told them, ‘not for me.’ I had a great day and we went on to Cincinnati from there. We were in the locker room getting ready when Alston walked over to my locker and said, ‘Why don’t you just stay in that leadoff spot? And don’t wait for steal signs either.’ Man, I had a great season after that. I was in the top ten in hitting and stole 50 bases, beating the Dodger team’s record, formerly held by Jackie Robinson.”

On why the Dodgers traded him to Pittsburgh:

“Because I jumped the tour in Japan without the team’s permission. We went to Japan after we lost the 1966 World Series. I got hosed on that too. It was supposed to be a voluntary trip, and my leg was all banged up—I busted the cartilage in my right knee earlier that season, getting caught up in a rundown in New York playing against the Mets. Koufax and Drysdale said they couldn’t go on the trip because they said they had previous business commitments. But back then, players didn’t have any business commitments, they just didn’t want to go and the team wouldn’t force them. And I showed them how messed up my leg was and they still made me go. But they said I wouldn’t have to play, just sign autographs. I said okay and when I got there they started playing me. Pretty soon, the leg started hurting more and more. I asked for permission to go home and they said no. So, I got my own ticket and went home. The late Walter O’Malley didn’t like it and he got rid me of me—they traded me to the Pirates. I cried for a week when I heard about it.”