“(Brooklyn) fans were really close to the players and people would yell out stuff that was funny and witty. Now the fans just yell obscenities and anyone can do that. The Brooklyn fans were a lot of fun and I loved playing in front of them.” 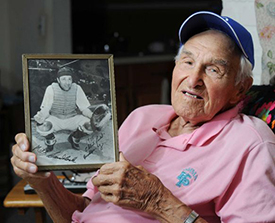 Mike Sandlock shows a picture of himself from back in the day before going out on his daily round of golf.

Mike Sandlock played for three different teams from 1942-1953 primarily as a catcher, although he did see some action at shortstop, second base and third. He entered the majors with the Boston Braves, spending one year with them before serving in World War II (1943). After his discharge, he returned to Boston (1944) and later played for the Brooklyn Dodgers (1945–46). He later spent time in the Pacific Coast League with the Hollywood Stars (1949–1952) and returned to the majors with the Pittsburgh Pirates in 1953, his last major league year. His most productive season came in 1945 with Brooklyn, when he hit .282 with two home runs and 17 runs batted in 80 games played, all career highs. In a five-season career, Sandlock was a .240 hitter with two home runs and 31 RBI in 195 games, including 34 runs, 19 doubles, two triples, and two stolen bases. Until his death in 2016 at age 100, he continued to play golf and remained active in the BAAT organization, which helps older baseball players who do not have health insurance.

“In 1942, the Boston Braves brought me up to play in one game. I came up and got a hit and then the season ended. But, I figure I did all right—I batted 1.000 in ‘42 and no one can argue the fact. We had a lot of laughs about that over the years.”

“They had me playing at catcher, but I kept telling them I ain’t no catcher. But, some of these scouts, coaches and managers—when they start thinking of you one way, it’s hard to get them changing their minds. So, they had me catching, until one day one coach asked me, ‘Can you play shortstop?’ I said, ‘Hell yes! I am a shortstop and that’s the best place for me.’ So, I started out as a catcher but played some as a shortstop. The positions have some similarities, because a catcher handles a pitcher but the shortstop is pretty much in charge of everything going on in the infield. You have to have smarts to play either position, but I always preferred shortstop.”

On his Hollywood Years:

“I really enjoyed myself playing for Fred Haney with the Hollywood Stars for four years there. They had me doing a lot of catching—everyone wanted me back at catcher and I guess I was fine with it. That team was great and the atmosphere in Los Angeles was exciting. We had Hollywood movie stars that would come to the games and I got to meet people like Grouch Marx, Danny Kaye and Jack Benny. It was a lot of fun and back then the Pacific Coast League had some of the best players in the country playing there.”

How Did You Get So Old?

“Who knows? Most of my teammates are long gone. It’s just luck, really. I still play golf when I can. The rhythm isn’t there anymore, but I still hack away. I play with these old timers and we lie about our scores and laugh about it, so it’s fun. Age is something I never got caught up into. I’m still that 20-year-old kid in my mind and maybe that’s one reason why I’ve lived this long.”

On Catching vs. Playing the Infield:

“If you see great defensive catchers with low batting averages, don’t be surprised at all. When I played shortstop, my batting average was around .300, but when I caught, it was more like .250. Why? Because first off, catching takes a toll on your body and it wears you out. Secondly, it takes a lot of concentration to be a good catcher, because you’re calling the game and managing the pitcher. You have to think about 1,500 things at the same time—who’s on what base; what’s the count on the batter; how many outs; who’s the hitter and what are his weaknesses—all that. As a shortstop, all you have to do is anticipate the ball and be in the right position to field it. You are in charge of the infield, but it’s not like catching, where you have so much to think about all the time.”

On Playing with Roy Campanella:

“Campy and I started playing together on the Montreal Royals back in 1947, a team that pretty much dominated. He was a delight to be around, because he knew how to talk to people. We discussed baseball all the time, breaking down a player’s weaknesses and how to pitch to him. He knew a lot about the game and he was quite intelligent and I knew back then that he was going to be a big deal when he got up to the majors.”

On Playing with Gil Hodges:

“The man was a great teammate and a real gentleman and an amazing player, and the fact that he’s not in the Hall of Fame is a disgrace. What the hell are those people thinking about? It’s a real shame. When I first met Gil, he was a catcher and a hell of a catcher. He could throw and he was built well, but he ended up at first base. Later, he was a winning manager and everyone liked Hodges. His players respected him. There are some people in the Hall that don’t deserve to be there and Hodges should have gotten in well before they did.”

On the Brooklyn Fans:

“They boo you one minute and then cheer for you the next. ‘You’re bums, but you’re our bums,’ they used to say. I got to know some of them, including Hilda with the cowbell. She was quite a character. The fans were really close to the players and people would yell out stuff that was funny and witty. Now the fans just yell obscenities and anyone can do that. The Brooklyn fans were a lot of fun and I loved playing in front of them.”

On Collisions at the Plate:

“We had Carl Furillo playing in right field for the Dodgers and he had a canon for an arm and we were playing the Cardinals one day. I was catching and Enos Slaughter was the runner on third base with one out and the batter hit a fly ball to Furillo and he got it to me on one bounce—a perfect throw. Slaughter was right on top of me, so I had no time to think. He plowed right into me and knocked me back almost to the wall. My mask went flying in one direction and my shin guards went the other way. But, the umpire followed me as I flew through the air, and when I landed he saw I had the ball in my bare hand and he called Slaughter out. I never kept the ball in my glove in those situations, because I knew the runner would try to knock it out of there, so I always tried to keep it in my bare hand.”