“I got to play with Larry Doby on that team and he taught me so much, so much. Not just baseball stuff, but how to dress right and act right out on and off the field…What an education he gave me, not to mention all of the amazing people he introduced me too. Count Basie, Adam Clayton Powell, Jim Brown, Miles Davis, Billie Holiday and Dorothy Dandridge.” 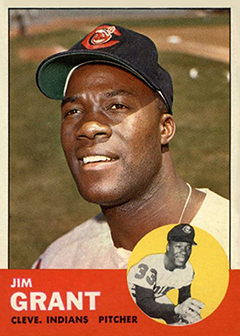 Jim “Mudcat” Grant is a two-time All-Star who pitched for the Cleveland Indians (1958–64), Minnesota Twins (1964–67), Los Angeles Dodgers (1968), Montreal Expos (1969), St. Louis Cardinals (1969), Oakland A’s (1970-71) and Pittsburgh Pirates (1970-71). Grant signed with the Indians in 1954 as an amateur free agent and made his big league debut with Cleveland in 1958. His best season with the Tribe came in 1961 when he had a won-loss record of 15-9 and a 3.86 earned run average; in 1965 he went 21-7 for the Twins, helping to lead the team to the World Series against the Dodgers. After his playing career ended, Grant worked for the North American Softball League, one of three such mens’ leagues active in the pro softball era. He later worked as a broadcaster and executive for the Indians, and also as a broadcaster for the Athletics.

On his Rookie Year:

“I hit the ground running with the Indians and played hard, because I did want to go back to the minors. That was probably my biggest motivation. I went 18-7 the year before at San Diego in the PCL, so I figured I had done my time at that level. So, I won ten games that first year in 1958 and really enjoyed being a major leaguer. I was happy to be playing in Cleveland, because they along with the Dodgers were known for signing black players. I got to play with Larry Doby on that team and he taught me so much, so much. Not just baseball stuff, but how to dress right and act right out on and off the field. Larry was a class act and the fans both black and white loved him. What an education he gave me, not to mention all of the amazing people he introduced me too. Count Basie, Adam Clayton Powell, Jim Brown, Miles Davis, Billie Holiday and Dorothy Dandridge.”

On Meeting the Old Satch:

“Doby taught me about life, but Satchel Paige taught me about pitching, so I had the best coaches in the world right there. I met Satch in 1955 when we were both in the minor leagues and he was so smart and funny. One day he told me, ‘You’re gonna need a titty pitch if you want to pitch in the majors.’ I thought it was a dirty joke, but no, he was serious. ‘A titty pitch is right here,’ he said, pointing to his chest. What he was trying to tell me is that if you can’t pitch inside at the top level, you can’t succeed. But he had to communicate it in his style, which was always fun, because you never knew what he was going to say next.”

On his Cleveland Teammates:

“We had Minnie Minoso and he was a kick to be around. Let’s put it this way—he loved the ladies and they returned that love. He liked to dance and he was good too. Then, there was Vic Power, another interesting man. He and I would go out on the town a lot and we liked the same types of music. Vic was a little militant in some ways and he wasn’t very chummy with many of the white players, but everyone respected him. Rocky Colavito was a good teammate and a devout Catholic. He was one of the team’s leaders and he was clutch, man. He hit a lot of big home runs for us in big games and that’s why he was a star.”

On Integration with Pitchers:

“When I joined the Indians there were just four black starting pitchers in major league baseball and even though Jackie Robinson had broken through, people were still not comfortable with black pitchers. Bob Gibson was leading the way at that time and Al Jackson was pitching well with the Mets, but black pitchers back then were scarce and things were changing slowly. It’s the same way people question whether or not a black quarterback is smart enough to play the game. It was similar with black catchers too for a long time. They figured a black catcher wouldn’t be able to call a game, which is ridiculous, because Elston Howard and Roy Campanella were some of the very best.”

“It was a pleasant surprise, because I came to Minnesota at a good time. They were one year away from being dominant and man, they had some power in that lineup. Harmon Killebrew, Tony Oliva and Bob Allison—the ball was flying out a lot. That was Oliva’s rookie year and he just ripped up the American League, batting around .320. The pitching staff was first-class too, with Camilo Pascual, Jim Kaat and Jim Perry. What a team. So, when I showed up there in mid-June, I thought—yeah, this can work.”

“We played the Dodgers and they beat us in seven games. We could not hit Sandy Koufax, but who could? In Game One, I beat Don Drysdale, 8-2. I gave up one run in the second inning and then another one in the ninth, and that was it. Both teams got ten hits, but I scattered the ones I gave up. (Don) Mincher and (Zoilo) Versalles hit home runs and we were thinking—these Dodgers aren’t that great! But when we faced Koufax that first time, oh wow—he made us look bad. He made everybody look bad. In Game Six, I pitched another complete game, but we lost 5-1. It was tough to lose that Series, because we were so close to winning it. Lou Johnson hit two timely home runs in Games Four and Seven for L.A. and that was the difference—other than Sandy, of course.”