“I had nearly every disease you could have as a kid. I was always sick. I always drank a little bit and I smoked cigarettes during my whole baseball career. So, I can’t tell you why I’ve lived so long.” 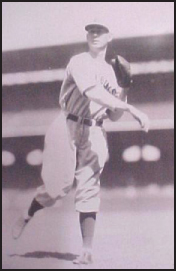 At the time of this interview, Rollie Stiles was, at age 100, the oldest living former major league player—and one of only five people left on the planet who either played with or against Babe Ruth. He pitched for Oklahoma State University and played for almost ten years in the minors and majors. He was a middle reliever, a spot starter and an occasional closer for the St. Louis Browns in 1930-31 and 1933 with a career record of 9-14. He completed nine games, threw one shutout and gave up 16 home runs (including one controversial blast to the mighty Babe that he says may not have happened—although he can’t be sure.) Stiles’ lifetime earned run average was 5.92 and he wasn’t a bad hitter, batting .270 in 1930. In 1931, he finished 15 games for the Browns, which ranked eighth in the American League for that season. At 100, Stiles’ long-term memory is excellent, although he does have problems recalling things that happened within the last few years. When I asked him about a speech he gave last November to around 300 people at a St. Louis Browns reunion, it came as a surprise to him. He had no recollection of the event.

On playing against Babe Ruth:

“I am proud to say that I got the chance to pitch against the man. They say he hit a home run off of me, but I don’t remember it. Well, now wait a minute. I know one of the games when I was pitching against the Yankees, he hit a ball right down the right field line, and, of course, the right field bleachers was pavilion-like and there was a screen that was there to protect the right fielder that went about halfway down over that pavilion. So, he hit a high fly ball and I believe it hit the foul pole and bounced down on the roof of that pavilion. I know this happened. Now, whether that was a home run or not, I don’t remember. But, I know he did that and it could have been a home run. I don’t remember how it was scored. .”

On pitching to Lou Gehrig:

“He was the best hitter I ever faced. That’s what I thought about it. I couldn’t throw a ball anywhere where he wouldn’t hit it. He was just happy to see me go in there. I think he could hit anything I threw. If he could reach it, he could hit it.”

On being managed by Rogers Hornsby:

“Yeah, that has to be the darkest part of my career. He was a great ball player—I’ll say that for him. He was a great second baseman. He was a good hitter. But, his personality was altogether different. I don’t really want to say anything more on that subject. I can’t ever remember anyone being happy that they played for Rogers Hornsby.”

On pitching against the good teams:

“Well, it just seemed to me like every time I went in to pitch, either Ruth, Gehrig or some of those players from the Philadelphia Athletics was up at the plate. At that time, the Athletics had the best ball team in baseball. When you went in to pitch to those fellas, you had to struggle all the time. And it wasn’t just the good hitters with the Athletics, it was their infielders too—the second baseman, third baseman—like that. When those guys got on a good team they became great hitters. That’s the way it was with everybody on that team, the Athletics. They had Simmons, Foxx, Cochrane, Dykes—you had to struggle with everybody on that club. You couldn’t look at any one hitter and say I’m gonna get this dude out. If you weren’t careful, he’d slam one out between the outfielders somewhere, and you’d be in big trouble. It was murder having to go out and pitch to the Athletics.”

“I have an idea that back then some pitchers did things to the ball that they weren’t supposed to be doing. I wouldn’t be surprised if at that time there were more spitball pitchers than there ever were before. Now, I could throw a pretty good knuckleball, and sometimes I’d throw that. But, that was a legitimate pitch. But, I know there was cheating going on back then, with the spitball and things like that. There weren’t that many complaints about it. Once in a while somebody would squawk, you know, but officially there were never any complaints. At least not that I knew about.”

On being told he’s the oldest living ex-major leaguer:

“Am I really the oldest? Are you sure about that? You’re kidding? I didn’t know that.”

On why he thinks he lived so long:

“Hell, I don’t know. I was sick all the time when I was going to school. I would miss at least a week of school every term with the flu, or something like that every year. I had nearly every disease you could have as a kid. I was always sick. I always drank a little bit and I smoked cigarettes during my whole baseball career. So, I can’t tell you why I’ve lived so long.”