“I loved playing in Hollywood. All the big movie stars came to our games. In fact, I met Harry James, Ronald Reagan, the Marx Brothers, George Raft—oh boy, you name it, (Frank) Sinatra came out there and…I got along real good with all of them, but I never worshipped them or anything like that. I treated them like everyone else, and I think they appreciated it.” 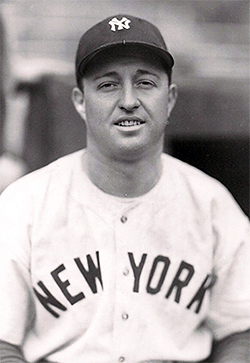 Rugger Ardizoia, born in Italy, was a veteran of the Pacific Coast League but got his one shot at the major league level by pitching one game for the 1947 New York Yankees.

Rinaldo “Rugger” Ardizoia is one of only six Italian natives to ever play in the big leagues, appearing in one game for the New York Yankees in 1947. His minor league baseball career spanned 15 seasons, starting in 1937 with the Mission Reds in the Pacific Coast League (PCL); he missed three seasons while serving in World War II in 1943-45, then played for the Oakland Oaks of the PCL in 1946. Following his brief major league career, he returned to the PCL until 1950, then ended his career with the Dallas Eagles of the Texas League in 1951.

“I first played baseball for the CYO (Catholic Youth Organization) in San Francisco in 1931 when we first started CYO and we played at St. Theresa’s Church. And then after that I played in American Legion, junior high, high school and then the day I graduated from high school, I was already signed by the Missions, and they paid me while I was in school. And I had to reject a scholarship offered by Stanford, because by then I was already a professional. In those days, my father was only making $25 a week, and by the time we paid our bills, we truly had no money left. I was getting $150 a month, so the money was pretty good. So when I turned 21, I bought this house here in South City, and I got a new car that next year. Then I got married in 1942 and we’ve been living here ever since.”

On the Pacific Coast League:

“During that first season with the Missions, we started hearing rumors that the team might be moving to Hollywood. Well, San Francisco just couldn’t support two teams—it was too much. When the Missions would be on the road, the Seals would be at home. And when the Seals went on the road, the Missions were at home. So, it was constant baseball, and it was too much. And Hollywood was free down there, it was wide open, and the first year they moved down there, they played at Wrigley Field. And then in the meantime, they built their own ballpark in 1939. We opened the season at the Hollywood Speedway. I loved playing in Hollywood. All the big movie stars came to our games. In fact, I met Harry James, Ronald Reagan, the Marx Brothers, George Raft—oh boy, you name it, (Frank) Sinatra came out there and, oh jeez, the Bowery Boys, Bill Patrick, Rita Hayworth. I met them all, I guess. A lot of times I’d see Desi Arnaz and Lucille Ball, and I’d sit down with them to shoot the breeze. I got along real good with all of them, but I never worshipped them or anything like that. I treated them like everyone else, and I think they appreciated it.”

On Defending his Country—Though he was Not Yet a Citizen:

“Well, it was embarrassing, yeah. In those days, you had to wait two years in this country and then go before a judge and answer questions and all that stuff. But then I got into World War II, and even though I wasn’t a citizen, I accepted the induction. So I spent three years in the service, and when I came out I got discharged. ‘Hey,’ I said. ‘I want to become a citizen.’ The judge said, ‘Aren’t you already a citizen?’ I said ‘No.’ He said, ‘Then what the heck are you doing in the Army?’ I said, ‘Well, I volunteered. This is my country.’ ‘OK,’ he told me. ‘Stick around for a couple of days and we’ll make you a citizen,’ he said. ‘No, way,’ I told him. My son was 18 months old and I hadn’t seen my wife in three years. ‘See you later,’ I told the judge. So, I came home to San Francisco and then a little later I went down to the Federal Building to go before another judge and he had me raise my right hand, and said, ‘Do you solemnly swear to defend the United States?’ And all of a sudden he stopped and said ‘Wait a minute. You just came out of the Army?’ I said, ‘Yes, sir.’ And he said. ‘Well then you’re already a citizen.’ And that’s how I got to be a citizen.”

On Playing Ball During the War:

“In 1945, myself and around 50 other players were invited to be part of a baseball exhibition tour of the Pacific islands. There were three teams playing—the 58th Bombardment Wing Wingmen and the captain was Birdie Tebbetts, Detroit’s catcher; the 73rd Bombardment Wing Bombers, run by Buster Mills with the Indians; and my team was the 313th Bombardment Wing Flyers, and our manager was a fella named Lew Riggs, who was with the Dodgers before the war, you know. The tour went through places like Saipan. We were basically there to show the troops some baseball, right before they were going off to bomb Japan.

We played a round-robin tournament starting that summer, playing games at Saipan, Tinian, Guam and Iwo Jima. One day we were playing on Iwo Jima at the same time as a big named band was there. We had about 10,000 soldiers watching us while the band had only about 1,000 listening to them. The band leader was so upset he decided to pack up and leave while we were still playing our games. The soldiers wanted baseball and they were starving for it and music took a backseat that day!

After 18 months in the Pacific I was very anxious to get back home to see my wife and my son, whom I had never seen. But, We had a great team there during the war, with guys like Joe Page, Joe Gordon, (Frankie) Crosetti at short, a kid named Bob Dillinger, who played with the Browns at third; we had Mike McCormack from Cincinnati in left and a guy named Joe DiMaggio in center. Boy—that was one helluva team, believe me!”