“In 1983, I made an error and then I made another one, and pretty soon I let doubt and fear creep into my psyche. And when that happens, you’re a goner. I just lost my confidence, it’s that simple.” 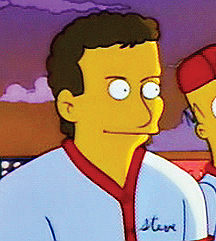 Steve Sax is enlisted to play ball in The Simpsons. At the end of the episode, he is given six life sentences in prison for being responsible for every murder in New York City—just because he happened to be there.

Steve Sax was drafted by the Los Angeles Dodgers in 1978 and was a late-season call up in 1981, playing 29 games. He broke into the majors as a regular in 1982, earning the National League Rookie of the Year award. Throughout his career, Sax was a five-time All-Star and hit over .300 three times. He had great success on the basepaths, stealing over 40 bases in six seasons for a career total of 444 stolen bases. He also set the Yankees team record for most singles in a season (171 in 1989). Sax has two World Series rings, both with the Dodgers (in 1981 and 1988).

In 1983, Sax inexplicably became incapable of making routine throws to first base, committing 30 errors. This is now referred to in baseball terminology as “Steve Sax Syndrome,” the fielder’s variant of “Steve Blass disease,” named after the Pirates pitcher who suffered a similar breakdown of basic mechanics. As his accuracy suffered, fans sitting behind the first base dugout began wearing batting helmets as mock protection. (Teammate Pedro Guerrero, an outfielder pressed into service at third base in 1983, once reportedly stated that his first thought whenever he was in the field was “I hope they don’t hit it to me,” while his second thought was “I hope they don’t hit it to Sax.”) By 1989, however, Sax seemed to be completely “cured,” leading the American League in both fielding percentage and double plays.

After Steve’s playing career ended in 1994, he has been involved in various ventures, including working as a baseball analyst on television. Sax has made television cameos, including The Simpsons, Square Pegs, Who’s the Boss, Hollywood Squares and Sabrina The Teenage Witch; he’s also appeared on the Sean Hannity’s Fox News show. He briefly ran for a seat in the California State Assembly 5th District as a Republican in 1996, but dropped out of the race when his divorce became publicized. In 2013 he was the first base coach for the Arizona Diamondbacks.

On his Two World Series Rings:

“They’re in the closet and that’s where they’ll stay. People ask me all the time, why aren’t you wearing your two World Series rings, but I’ve never been a big jewelry guy. Plus, have you seen them? They’re huge and pretty gaudy, so to be honest—I’ve never worn them and I have no plans to ever wear them. It’s like attaching a big trophy to your finger. It’s unwieldy, to be honest.”

“We had absolutely nothing to lose with that team, because everyone was picking us to finish fourth in the NL West that year. The pressure was on the other teams, not us. On paper, we weren’t that strong, but they don’t play the games on paper. It was an amazing season and when we beat the A’s in the World Series it was improbable, which made it even sweeter. We had a lot of role players that many people won’t even remember now, like John Shelby, Rick Dempsey, Alfredo Griffin and Mickey Hatcher, who really contributed. We had no stars on that team. In fact, nobody had 100 RBIs; no one hit 30 HRs and nobody batted higher than .300. Everything just came together—Orel Hershiser won 20 games for the only time in his career and of course, Fernando Valenzuela came out of nowhere to dominate. It was a great season and the best part of it all was it was unexpected.”

On Clearing the Way for Kirk Gibson’s Historic Home Run:

“Yes, I made sure that none of my teammates touched him before he crossed that plate. The rule is that if anyone touches the runner, he can be ruled out. I did not want anyone to touch Gibson until he crossed that plate, and then we mobbed him! I was clearing everyone out, because I just wanted to make sure there would be no question.”

“It was incredible, because here I was right out of the minors and right away we win it all. It was a perfect situation for me, because that team was loaded with veterans and they were willing to help me in any way they could. Steve Garvey, Davey Lopes, Jerry Reuss, Bill Russell—all those guys allowed me to make the transition a little easier. If I had been on a team of less-experienced players or veterans who weren’t willing to help a rookie like me, I’m sure it would not have been as wonderful as it was. They had been there before, so that was a huge step for me. Being in the World Series was phenomenal and I was fortunate to get called in directly from Double A. I never even spent one day in AAA, so my first year with the Dodgers was definitely a very valuable experience.”

“Playing for Tommy was one of the biggest thrills of my baseball career. He galvanized people from different backgrounds and with different perspectives on life and baseball. His personality was endearing and you could recognize his passion for the game almost instantly. He spoke Spanish, so he could talk to Fernando and he was equally comfortable hanging out with players and the coaches, as well as his celebrity friends, like Frank Sinatra and Don Rickles. He was able to bring a team together and have them all pulling on the same end of the rope. Sure, strategy is an important part of it, but you can’t undervalue the power of a personality like Tommy.”

“I met Valenzuela during his first day as a Dodger, as he came in to join us in the Arizona Instructional League. He had hair down the middle of his back and was bouncing fastballs right and left. But, when Bobby Castillo taught him the screwball, that’s when his career just took off.

Fernando was unaffected during the whole Fernandomania period. He comes from a close family and he’s very grounded, so he could care less about the lights and fame of L.A. He’s the same person today that I saw that first day and he’s a kind, gentle soul.”

On Hard Work and his Early Throwing Problems:

“I love baseball and I was never afraid to work hard. When Davey Lopes got hurt, I got an opportunity to play second on a daily basis and I took advantage of it. He was getting up there in age, so everything lined up for me.

Early in my career, I did have a problem throwing to first base. To this day, young people come up to me all the time and tell me, hey—they have the same problem. Parents call me and ask me how can they help their child from overcoming this problem? It’s more common than you probably realize. In 1983, I made an error and then I made another one, and pretty soon I let doubt and fear creep into my psyche. And when that happens, you’re a goner. I just lost my confidence, it’s that simple. I am proud of the fact that I am one of the few athletes who overcame this problem. It’s also prevalent in other sports, like tennis and golf; Showtime is doing a documentary about it right now. It became embarrassing after a while. ‘There’s the guy who can’t throw,’ I kept hearing and, sure, it started to affect me. People were trying to bet on me to screw up in Las Vegas and I even got some death threats, so it was crazy until I beat it. At 24 years old, it was pretty scary and tough to handle.”

On Being on “The Simpsons”:

“That was a lot of fun. I get a lot acclaim from being on the Simpsons and people ask me about it all the time. They dubbed my voice and then took it to Japan and then drew my character and it takes a full nine months to produce one show. The Simpsons is super popular all over the world, so people always ask me about it. I was Rookie of the Year, played for the Dodgers and the Yankees and won two World Series, but everyone wants to know about my appearance on the Simpsons.”