“Jim Bouton was my teammate in both Seattle and Houston and he mentioned me a few times in his book, Ball Four… Many players believe that anything that happens in the locker room should stay there, but I’m not an advocate of that. But, I’m not mad at him and I never was, because everything he wrote was accurate and he was honest.” 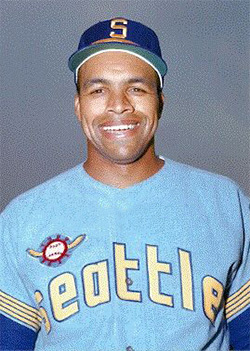 As a left fielder and third baseman “Tommy” Davis, Jr. played from 1959-76 for 10 different teams, but he is best known for his years with the Los Angeles Dodgers when he was a two-time National League batting champion. During an 18-year career, Davis batted .294 with 153 home runs, 2,121 hits and 1,052 runs batted in. He was also one of the most proficient pinch-hitters in baseball history with a .320 batting average (63-for-197)—the highest in major league history upon his retirement, breaking the .312 mark of Frenchy Bordagaray. In 1962, he finished third in the MVP voting after leading the major leagues in batting average, hits and RBIs. Davis’ 153 RBIs in that season broke Roy Campanella’s team record of 142 in 1953 and remains the franchise record; his 230 hits are a team record for a right-handed batter (second-most in franchise history behind only Babe Herman’s 241 in 1930), and his .346 average was the highest by a Dodger right-handed hitter in the 20th century until it was broken by Mike Piazza in 1997. He played for the Dodgers, New York Mets, Chicago White Sox, Oakland A’s, Baltimore Orioles, Houston Astros, Chicago Cubs, California Angels, Kansas City Royals and the 1969 Seattle Pilots (now the Milwaukee Brewers).

“We had a great group that season, without any big egos and a lot of guys who were focused on winning. We had outstanding speed and strong pitching. (Ron) Perranoski was solid all year long and (Johnny) Podres was unhittable. He worked so quickly out there, we could make early dinner reservations. That ’63 team was the best squad I ever played for, hands down. We swept the Yankees in the World Series and I do remember hitting two triples in Game Two. I had the only RBI in Game Three and Drysdale beat Bouton 1-0. I think I hit .400 to in that series and everyone was shocked when we swept the mighty Yankees.”

“After a lousy year in 1964, we won 97 games the next season and went back to the World Series. But I watched it, because I missed pretty much the whole year in 1965. In May we were playing the Giants and I broke my ankle going from first to second on a grounder to Orlando Cepeda. I was running along the inside of the baseline expecting the Baby Bull to throw to Pagan. As I came up to the bag I did a very awkward crossover step and my right leg got caught in the clay and snapped it. I was definitely in shock. The Dodger trainer ran out there and twisted my foot back in place, but I never felt it. I was feeling okay, but then Dr. Kerlan the team doctor told me I was pretty much done for the season with a break and a dislocation. The guy who took my place, Lou Johnson, went on to have a great year, so that was at least something good that came from the injury.”

Off to the Big Apple:

“After the season, I got traded to the Mets for Ron Hunt and Jim Hickman. I played left field with their two rookies—Ron Swoboda and Cleon Jones—and worked with them. I was still coming back from my injury, so I wasn’t 100% all season long, but I still led the Mets in hitting (.302 average, 32 doubles, 16 home runs, 174 hits, 72 runs and 73 RBIs). Some people wrote me off, but I showed them I wasn’t washed up.”

“In 1968, the Mets traded me to the Chicago White Sox for Tommie Agee and Al Weis. They didn’t have any big bats, so Chicago dropped 95 games that year. I hit .268 on a team and tied for the lead on that team with 50 RBIs. After the season, they put me up for the expansion draft and the Seattle Pilots picked me. To be honest, the Pilots were a better team than the White Sox in 1968.”

On his Year in Seattle:

“My leg was never right, and it bothered me for the majority of the 1969 season, even though the Pilots were a running team that year and I stole 19 bases with the team. I also hit around .270 and lead the team in hits and RBIs until they traded me to the Houston Astros in late August. The Astros had a good team, but I never got used to playing in that big dome on a daily basis.”

“Jim Bouton was my teammate in both Seattle and Houston and he mentioned me a few times in his book, Ball Four. I never liked what he wrote about Mickey Mantle, but it did not affect our relationship right up until his death. He wrote some good things about me, and I know that he made some other guys upset. Many players believe that anything that happens in the locker room should stay there, but I’m not an advocate of that. But, I’m not mad at him and I never was, because everything he wrote was accurate and he was honest. I know the Pilots manager Joe Schultz thought it was a distraction, but I thought it was well-written and damn funny.”

“I jumped around quite a bit in 1970 with the Astros, A’s and Cubs. When they called up César Cedeño in Houston, I was pretty much expendable. With the A’s, I played in a great outfield with Reggie Jackson, Rick Monday, Joe Rudi, as well as Felipe Alou. Once the A’s started fading, their owner Charlie Finley sold me to the Cubs. He wanted to sign me later at a lower price and that’s why I think he sold me to Chicago.”

On Being a Designated Hitter:

“In baseball, it’s all about timing. When I was playing for the Orioles in 1973, the designated hitter came around and I was comfortable filling that role. As their full-time DH, I led the team in hits and RBIs, and hit more than .300. I also had a decent year in 1974, once again leading the team in hits (181), average (.289) and RBIs (84). Baltimore won the AL East that year, surviving a late charge by the Yankees, but we ended up losing the ALCS to the A’s.”