“I’m the first white player who ever got hit by a pitch from a black player… Everyone kind of hesitated when he hit me, there was almost like a hush. It was like, what’s gonna happen next?” 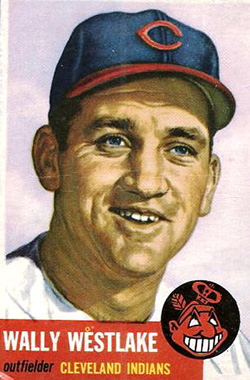 Wally Westlake poses for an illustrator in this early baseball card, late in his career—playing for the 1954 Indians, the only pennant winner he would be a part of.

Wally Westlake was a utility player who had a 10-year career from 1947-1956. He played for the Pittsburgh Pirates, St. Louis Cardinals, Cincinnati Reds, Philadelphia Phillies, Cleveland Indians and Baltimore Orioles. He played third base and outfield. He was elected to the National League All-Star team in 1951. Westlake is a graduate of Christian Brothers High School in Sacramento, where he lived out his life until 2019 at the age of 98.

“There were quite a few pitfalls in my baseball career before I made it to the major leagues. I was originally signed by the Brooklyn Dodgers at age 19 in 1940. They sent me to Dayton, Ohio, Mid-Atlantic League, Class D. They were paying me around $120 a month, and my first thought was, what on earth am I going to do with all that money? Well, I didn’t play well. Every curve ball fell off the table and I was a day late on every fastball, so it was not a real confidence builder, to be certain. They called me into the office one day, and gave me a pink slip and my bus ticket home. They told me I should go home, forget about baseball, because I’d never have the skills to be a professional ballplayer.

So, that night I’m leaving for the bus, and on the way there, I swing by the ballpark; the lights are on and the game is on. Forgive me, but the tears and the snot was flowing and I asked myself right there—you think I am going to quit? Not yet. The worst thing that scared me was the idea of facing my dad. I couldn’t face him as a failure. Fear of failure is one of the greatest motivators in the world, believe me. So, they let me stay and pretty quick I started playing better. And before I knew it, I was moving up through the minors at a pretty good clip.”

“I had some great teachers along the way, like Casey Stengel during my career in the minor leagues. He was a very strong force in my career starting in 1946. He saved my butt. Called for me one day early in the season and said, ‘You got talent and you can catch and run well enough to play center field, but there’s a lot more to it than just that. I am going to teach you how to play at the major league level.’ And he did. For six months, he rode my biscuit, let me tell you. ‘Mister, you got your head where the sun don’t shine,’ he told me. He was tough, but he made the game fun. He taught me how to read the pitchers, how to anticipate in the field, so that I was in position to make the tricky catches. He turned it around for me. I was 25 years old at that point and I was running out of time. Today, if you’re 25 and still in the minors, they give up on you. So, every chance I get, I’m proud to say thank you to Charles Dillon Stengel.”

On His Peculiar Place in History:

“It turns out that I’m the first white player who ever got hit by a pitch from a black player. It was a kid named Bankhead, a rookie pitching in middle relief for the Brooklyn Dodgers, making his debut and pitching in front of a packed house at Ebbets Field in late August, 1947. He was the first black pitcher to play in the majors. Everyone kind of hesitated when he hit me, there was almost like a hush. It was like, what’s gonna happen next? But nothing happened and the game went on. It didn’t matter to me one way or another. I didn’t care if he was blue, green or purple out there on the mound, because he’s trying to get me out and I’m trying to whack his butt, regardless of who he is. But, my name gets mentioned quite a bit with that piece of fairly meaningless baseball history.” 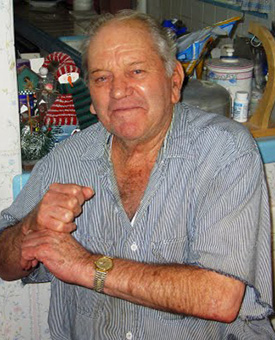 Westlake in 2009, striking the batting pose at his home in Sacramento.

“I look back at all the crap Jackie went through that first season and I have nothing but utmost respect for the man. They did some unspeakable things to Robinson, and he should have kicked some asses, which he was more than capable of doing. A real man has to turn his other cheek, but your average individual would have blown his temper and punched a few bigots. You talk about guts, he had it. I don’t know how he did it. Jackie sat there and took it that first year and then Branch Rickey turned him loose that second year. Those bigots got some comeback that second season, that’s for sure.”

On his First Year in the Bigs:

“We were basically terrible. That Pittsburgh team in ’47 had two stars—Hank Greenberg and Ralph Kiner and that was it. Greenberg was in his later years by that time (age 36) but he still hit 25 home runs that season. And Kiner hit 51 homers, and batted .313. But the rest of the team is fairly forgettable. The Pirates in ’47 made a lot of errors (149) and the team ERA was close to 5.00. The pitching staff threw 44 complete games, because the bullpen was awful. The starters had to finish games. We ended up 62-92 in last place, 32 games behind Brooklyn. It was a long season to start a career in the majors, that’s for sure, but I loved every minute of it.”