“I remember all of it. It’s still fresh in my mind. I was running in the outfield during warmups when everything started shaking.  The light standards began moving back and forth and a wave traveled through the stands and around Candlestick.” 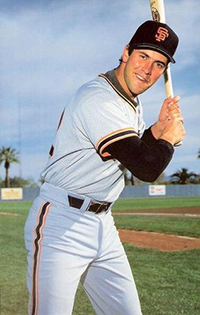 On Earning his Nickname:

“Bob Brenly started calling me ‘The Thrill,’ during my rookie season in 1986 and the media loved it, so it stuck. I got off to a really good start and people kept calling me ‘The Thrill’ so I went with it. Some people don’t like their nicknames and at first it was a little weird calling me that, but I got used to it. When I played in college, the press called Rafael Palmeiro and me ‘Thunder and Lightning’ so I have had a few nicknames over the years.”

On his College Years:

“I loved my three years at Mississippi State University because we had a great team with guys like Palmeiro, (Bobby) Thigpen, and (Jeff) Brantley who all had good careers in MLB. I was also able to play in the 1984 Olympics in Los Angeles, and I won the Golden Spikes Award winner during my junior year at MSU. I skipped my senior year and was selected by the Giants as the second overall pick in the 1985 major-league draft.  They assigned me to the Fresno Giants of the California League (Class A) and I did pretty well (.309 batting average, 10 home runs, and 48 RBIs in 65 games), and hit a home run my first time up.”

On Moving Up Fast:

“When I went to Spring Training the next year, the Giants told me that I wouldn’t be going to San Francisco when we broke camp. But when I hit a few home runs (five, to be exact) our Manager Roger Craig changed his mind. They had Dan Driessen set up to be their starting first baseman, so I was really surprised when they told me I made the team. Roger told the press I had done everything I was asked to do and that I was ready for the major leagues. He said that it normally takes six or eight weeks to find out about a rookie’s ability, but after that one camp, he said I was ready to play first base at the highest level now.”

“My whole family traveled from New Orleans to see me play in my first game for the Giants. Our opener was in Houston and I remember it well. Our leadoff guy Dan Gladden grounded out in the top of the first inning, and I stepped up to the plate. Nolan Ryan threw me a chest-high fastball and I hit it into the center-field bleachers 420 feet away. Later they told me that I was the 53rd player to hit a home run in his very first game. I was just really looking for a pitch I could drive somewhere. I knew I hit it well, but I wasn’t sure if it would go out or not. By the time I hit second base, I was floating. It was a trip around the bases that I will never forget!”

On Going Up Against the Very Best:

“During my entire career, I seemed to step it up when I went up against the better pitchers in the National League. I hit a total of six home runs, drove in 11 runs against Nolan Ryan. I also batted well against guys like (Tom) Browning, (David) Cone, (Ron) Darling, and Rob Dibble—all of the best at that time.”

On a Batting Title Decided on the Last Day:

“It came down to me and Tony Gwynn and it was decided on the last day of the 1989 season. Up until then, I was more known for my power, but during that season I was happy to hit to all fields and bat more for average. Going into the last game of the season (at San Diego), I was a little ahead, but Gwynn got three hits and passed me. He finished at .336 and I batted .333. I told the media, ‘I got beat by the best, and there’s no disgrace in that.’ And Gwynn said, ‘I ended up winning it, but that doesn’t take away from Clark’s year.’”

“We had a great team that won our second NL West Division title in three years, and only the Chicago Cubs stood in our way if we wanted to get in the World Series. I had a lousy regular season against Chicago (.271 batting average without a home run) and didn’t do well against Greg Maddux (2-for-11) their best pitcher and their starter for Game One of the NLCS. On top of it, I hated Wrigley Field, because I had problems picking up pitches there with the ivy in the background. In Game One, I got us started in the first inning with a run-scoring double off Maddux. Then I hit a solo home run in the third inning, followed by a grand slam in the fourth, and sending Maddux to the showers. We beat them 11-3 and that gave us some momentum.  My six RBIs set a single-game playoff record for National League playoff games. (Clark tied NLCS records for most hits, runs scored, and most times reaching base safely in a single game.) The Cubs manager, Don Zimmer, told the reporters that I had a heck of a week in that one game. I ended up hitting .650 in those five games and then we were on to play the Oakland Bash Brothers in the World Series.”

On the Loma Prieta Earthquake:

“I remember all of it. It’s still fresh in my mind. I was running in the outfield during warmups when everything started shaking.  The light standards began moving back and forth and a wave traveled through the stands and around Candlestick.  There are a lot of memories you think about and you’re like, ‘Oh my goodness, that was pretty traumatic.’ After having been through it and being out on the field and being in the community for those next 10 days, it’s something that’s going to stick with me forever. We knew that the earthquake was going to make the World Series an afterthought and we would not be playing for a while. When you were going through it, I think that you know exactly when and where you were and what went on around you. The days after that, believe it or not, were a big blur, but during the event I knew everything that was going on. With any disasters like this one, everybody’s affected in some way. You know somebody, or a friend’s friend. It kind of sits with you, and you take it with you wherever you go. We were primed to play baseball and it was the biggest series in my life, but we were also concerned about the people who died or were injured in the quake.”