The Rockies’ Five Most Memorable Games

THE ROCKIES BY THE DECADE

A prime candidate for baseball over the decades, Denver was finally awarded a franchise for 1993—and a highly active fan base justified those who asked why it took MLB so long by clicking the turnstiles a record-shattering 4.48 million times in the Rockies’ inaugural season. The team built a terrific collection of offensive talent led by Larry Walker and Andres Galarraga, whose outrageous numbers were pumped up by Colorado’s mile-high conditions that allowed the baseball to travel farther. But it worked both ways; Rockies pitching suffered as a result of the thin air, tempering total success as the team made one postseason appearance (in 1995 as a wild card) but otherwise remained a .500 squad at best.

Todd Helton, Matt Holliday and Carlos Gonzalez continued the offensive-minded tradition in Colorado, but pitching at 5,280 feet remained a major challenge; the fans, exhausted from the high-scoring defeats, began to stay home. The introduction of a humidor to deaden the baseball appeared to help, but so did better arms; it all came together in 2007 when the Rockies rode a white-hot wave of momentum into the playoffs, winning 21 of 22 games and sweeping through the first two postseason rounds before bowing to Boston in the World Series. Another impressive late run two years later ended in a disappointing first-round ousting.

Bad times set back in as chronic injuries to Gonzalez, fellow All-Star Troy Tulowitzki and a fractured pitching staff hounded the Rockies, bottoming out in 2012 with a record-worst 98 losses as manager Jim Tracy panicked with a doomed four-man rotation and 75-pitch limit. Tracy successor Walt Weiss was next in line to tame the mile-high madness, with little success; poor owner-fan relations and an unpopular 2015 trade of Tulowitzki didn’t help. But Weiss’ replacement, Bud Black, steered the ballclub back to respectability behind a promising crop of young pitchers and the settling in of third baseman Nolan Arenado as, arguably, the Rockies best all-around player to date.

The shock trade of Arenado to St. Louis and the free-agent departure of infielder Trevor Story, both in 2021, turned the Rockies into a bland, starless side that still managed to entertain at home—but continued as an impotent mess on the road. The fan base remains impressively healthy, and it has not stayed silent in its anger toward owner Dick Monfort, who seems more interested in raking in revenue on team-owned development around Coors Field than in building a solid roster.

Highlights of the Rockies’ History on This Great Game:

2007: Bow if You Will, Spit if You Wish Barry Bonds breaks the all-time home run record under suspicious circumstances, but the other big news in the NL West is the Rockies’ remarkable run to the postseason—and their first National League pennant.

Ballparks of the Rockies 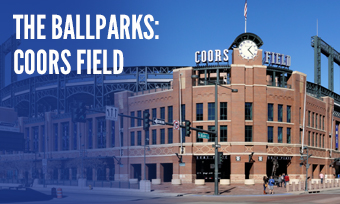 Who’s on the Mount Rushmore of the Colorado Rockies?

Original owner who made Rockies an entertaining and competitive organization through 2005.

Almost too good for Coors Field (where he hit a career .381), nabbing three batting titles and 1997 MVP.