The Nationals’ Five Most Memorable Games

THE NATIONALS BY THE DECADE

No stranger to baseball with a proud minor league history that included the setting for Jackie Robinson’s pro debut, Montreal was given one of two National League expansion franchises in 1968. Named after Expo 67, the successful world fair that was held a year earlier in Montreal, the Expos barely had a year to put everything together, including revamping an existing 2,000-seat dive (Jarry Park) to 29,000. The inaugural 1969 team lost 110 games but it didn’t matter to Montreal fans who immediately embraced matinee idols such as Rusty (la Grand Orange) Staub and imperfect no-hit author Bill Stoneman.

The Expos immediately shed their image as basement trash by continuously winning no fewer than 70 games—but remained stuck below the .500 needle for much of the decade, spinning their wheels trying to make that next step. The move from Jarry Park to massively modern Olympic Stadium in 1977, combined with the arrival of truly talented bats in Andre Dawson, Gary Carter and Larry Parrish, woke up a long-dormant offense and finally gave the Expos contender status by 1979, when it finished a mere two games shy of eventual champion Pittsburgh for the NL East title.

The Expos took advantage of a hastily-expanded playoff concept in the wake of 1981’s midseason strike and made their first and only postseason appearance while based in Canada, taking the Dodgers the distance before bowing in the NLCS. A lively roster fueled by Dawson, solid-hitting, lightning-quick Tim Raines and pitching ace/Expo lifer Steve Rogers continually kept Montreal competitive if not in the heat of the pennant race. Alas, the Expos were one of the worst offenders in the owners’ collusion scandal of the late 1980s, lowballing many of their star players back to Montreal while other teams refused to bid.

The decade began promisingly with a boatload of rich young talent (Larry Walker, Pedro Martinez, Moises Alou, John Wetteland, Marquis Grissom) that engineered baseball’s best record by 1994—but that year’s devastating player strike ruined any chance of a second postseason visit. Worse, new ownership in 1991 had little spending might and proceeded to tear the team apart by the late 1990s to stay in the black. Left over was exciting young slugger Vladimir Guerrero, who kept the team from sinking into a last-place hole.

Jeffrey Loria bought the team in 2000 and made things worse, budgeting the Expos on a shoestring while demanding a new ballpark to replace overbearing Olympic Stadium, long since in a state of (sometimes dangerous) decay. When that failed, he sold the Expos to the other 29 major league owners—who nearly folded the franchise in 2002. Instead, the team relocated to Washington in 2005 and opened in new Nationals Park in 2008. Throughout it all, the results on the field were middling at best with little growth in talent.

The momentum began to shift at decade’s start with the debuts of two wunderkinds: 100-MPH pitcher Stephen Strasburg and teenage hitting prodigy Bryce Harper. With some veterans peppered in, the Nationals finally put it all together in 2012 with their first non-strike year divisional title. They remained competitive and entertaining to boot, with the late-decade addition of a second ace (Max Scherzer) along with young hitting stars Trea Turner and Juan Soto. But postseason play proved consistently frustrating until 2019, when the Nationals bounced back from a 19-31 start and at long last captured the franchise’s first-ever World Series trophy.

The Nationals suffered through a throbbing post-championship hangover as high payroll and abundant deferrals owed to players no longer wearing the team uniform led to a fire sale midway through 2021. When that wasn’t enough, the team let go of Soto—who emerged as a bona fide superstar and was under team control for a few more years—in 2022 to San Diego for a package of top Padres prospects. These moves made it crystal clear that the Nationals, once again, are reloading and starting from the bottom up.

Highlights of the Nationals’ History on This Great Game:

1981: No Ball, One Strike The Expos make their only postseason appearance before their move to Washington thanks to a quickly expanded playoff format forged by owners desperate to keep fan interest high on the heels of a midseason player strike.

2019: The Pill of Might As home run records fall like dominoes, the Nationals rev up after a poor start and deliver a stunning postseason effort.

Ballparks of the Nationals 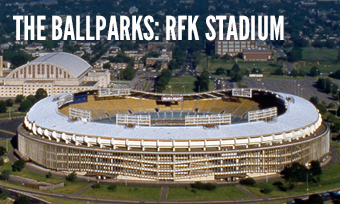 Who’s on the Mount Rushmore of the Washington Nationals?

The Hawk, billed as the team’s franchise’s first genuine superstar—and for the most part, he met those expectations.

Occasional All-Star who saw it all on D.C. side of franchise history, from early losing to first world title.