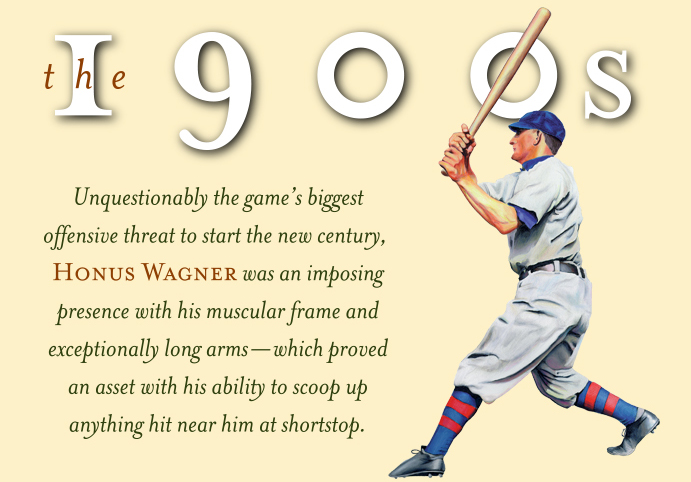 A long time from now, American sports historians will look back at the 20th Century as the baseball century. From start to finish, through thick and thin, baseball persevered for these 100 years with resilient popularity and remarkably little meddling of its rules.

And no decade in the baseball century bore more witness to change and evolution within the game than the 1900s.

The turn of the century saw the National League acting as a monopolistic sloth whose misbehavior impaired the game’s integrity. To the rescue came Ban Johnson, who in 1901 upgraded his American League to big-time status as a kinder, gentler alternative to the rowdy but more established NL. The AL’s instant success hit the senior circuit like a cold shower and served as a wake-up call to straighten up—but not before two years of all-out warfare in which the rival leagues wrestled over star players, territorial disputes and other politically motivated shenanigans.

From war came peace, and from peace came major progress. Interest and attendance soared. The World Series was initiated. Unruliness left over from the lawless 1890s slowly but surely was extinguished from owners who finally were showing the discipline to stop it.

On the field, the pitchers ruled. They had the advantage of using a ball that could be used, misused, scuffed, discolored and spat upon. The hitters had the disadvantage of not being able to call for a new ball. The resulting advent of the deadball era made kings of men on the mound with imperial feats likely never to be approached again: Jack Chesbro’s 41 wins in 1904, Ed Walsh’s 464 innings thrown in 1908, and numerous instances of Joe McGinnity pitching—and winning—both ends of a doubleheader.

Almost every name from the top ten list of career ERA leaders played in the 1900s, and two of those were the decade’s best and most consistent: Cy Young, who in 1900 was considered ready to pack it in at age 33—only to spend the next ten years winning 230 games; and Christy Mathewson, good boy in public with his polite college upbringing, bad boy to opposing hitters with 236 wins through 1909.

Only one hitter seemed constantly immune to the dominance of the deadball. Year after year through the 1900s, Pittsburgh’s Honus Wagner put serious dents into otherwise glistening pitching stats, winning seven NL batting titles with muscle to match. Wagner wasn’t through when he got on base, stealing more bags (487) than anyone else during the decade. It wasn’t until late in the 1900s that Wagner finally found an offensive contemporary in Ty Cobb, the fiery Detroit headliner who wore a chip on his shoulder the size of the Rock of Gibraltar.

As the two leagues grew to happily co-exist, as baseball’s rulebook was gradually left untouched after years of major adjustments, as an unprecedented round of superior ballparks was being built or planned, baseball prospered and stabilized into a game that people a century later could relate to. The modern age was on.

Forward to the 1910s: The Feds, the Fight and the Fix The majors suffer growing pains as they deal with a fledgling third league, increased scandal and gambling problems, and a brief interruption from the Great War.

Ban Johnson upgrades his minor league circuit to the big time and scores an impressive and colorful debut, thanks to aggressive player raids upon National League rosters.

1902 Enemies Within the Gate

Warfare between the American and National Leagues turns brutal with increased player raids and sabotage.

Both the American and National Leagues finally agree to co-exist in peace, leading to an inaugural “world’s championship”; between the two pennant winners.

The World Series becomes a casualty of a continued feud between two of the games’s most powerful men.

Christy Mathewson and Joe McGinnity completely deny the Philadelphia Athletics in the World Series for the New York Giants.

1907 Cultivation of a Georgia Peach

Angrier than life, Ty Cobb comes of age and delivers the Detroit Tigers to their first American League pennant.

Nineteen-year-old rookie Fred Merkle costs the New York Giants a National League pennant by committing one of the game’s most notorious blunders.