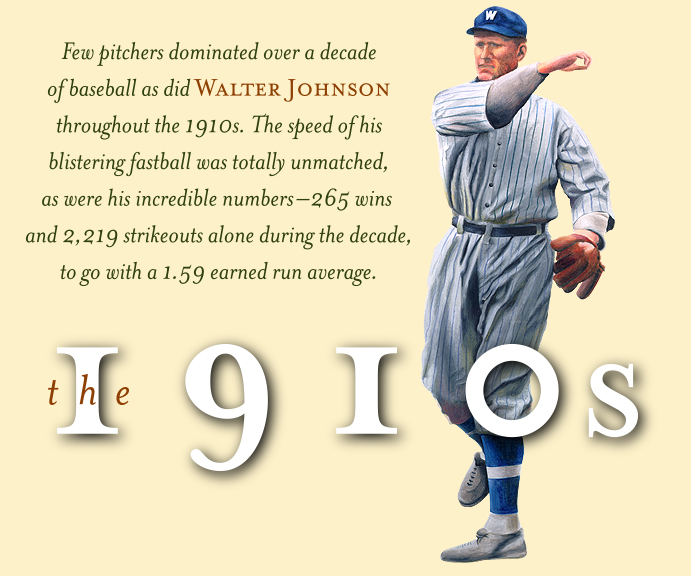 Baseball began the 1910s on a roll. The American and National Leagues had long since settled into a peaceful co-existence, glistening new steel-and-concrete ballparks were replacing the rotting, wooden relics left over from the 19th Century, and the World Series had established a lofty standing as one of the country’s premier sporting events.

Once its own worst enemy, baseball would find itself dealing mostly with external obstacles throughout the new decade. These obstacles would at times slow the majors’ momentum, at other times stunt it—and, by decade’s end, threaten to permanently ground it.

First came the Federal League, a rival third circuit not sanctioned by baseball’s imperialistic National Commission. The FL’s presence forced the two established leagues to raise payrolls in order to keep their players from jumping, but many fled anyway. The threat to the owners’ pocketbooks would be short-lived; the FL, fatally focusing on head-on competition in NL and AL cities while ignoring fertile markets uninhabited by the majors, collapsed after two seasons under the weight of financial losses brought on by the saturation it had created.

The NL and AL had barely returned to normal in the wake of the FL’s disintegration when a new challenge arose: World War I. Ballplayers were pressured to table their careers and take up more vital duties backing America’s war effort, while major league owners scurried to keep baseball active and financially solvent as the U.S. Government pressured to shut it down.

Baseball’s third—and most ominous—threat of the decade came from the ugly specter of game fixing. Outside interests certainly played a role in creating havoc with the game’s integrity, but the players, who easily sidled up to gamblers, and the owners—whose tight-fisted, penurious control of major leaguers helped fuel the players’ motives—bore a heavy share of the blame as well. It would all come to roost in 1919 with baseball’s darkest hour: The Black Sox Scandal, in which eight Chicago White Sox players successfully conspired to throw the World Series.

When the players were trying, the 1910s were dominated by the AL, winning eight World Series while the NL could only boast two champions: One (the 1914 Boston Braves) by a miracle, the other (the 1919 Cincinnati Reds) paid for in advance by the Black Sox. Part of the NL’s problem may have been in its lack of star power; outside of Pete Alexander, the senior circuit had few household names to brag, while the AL hogged the marquee with legends like Ty Cobb, Joe Jackson, Walter Johnson, Tris Speaker, Eddie Collins and a young Babe Ruth—who made for early fame as the AL’s best left-handed pitcher before being called upon to bring the game out of its post-Black Sox infamy as the game’s all-time greatest slugger.

Forward to the 1920s: …And Along Came Babe Baseball becomes the rage thanks to increased offense and the magical presence of Babe Ruth, whose home runs exert a major influence upon the game for ages to come.

Back to the 1900s: The Birth of the Modern Age The established National League and upstart American League battle it out, then make peace to signal in a new and lasting era.

Despite their reputation as one of baseball’s most heralded teams, the New York Giants continue to find complete frustration at the World Series, while major league owners otherwise keep a weary eye on an upstart third circuit, the Federal League.

Despite their reputation as one of baseball’s most heralded teams, the New York Giants continue to find complete frustration at the World Series, while major league owners otherwise keep a weary eye on an upstart third circuit, the Federal League.

After a typically depressing start, the hapless Boston Braves stagger the baseball world with one of the game’s biggest comebacks; meanwhile, the Federal League begins business.

The Chicago White Sox—the team that would throw the 1919 World Series—plays it strong and honest against the New York Giants.

Baseball scratches and claws to stay intact as World War I reaches its brutal apex.

Eight members of the Chicago White Sox plot the unthinkable and throw the World Series against Cincinnati.