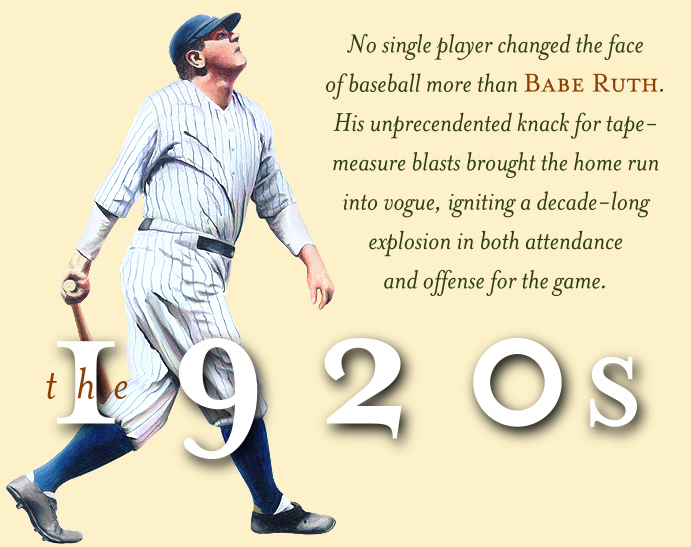 Over the last half of the 1910s, Babe Ruth played to the strength of the deadball era by shining as one of that decade’s best pitchers.

In the 1920s, he played to the strength of the live ball by picking up a bat and becoming the game’s greatest player, ever.

It was a remarkable transformation. Ruth the perennial 20-game winner converted into Ruth, the titanic slugger who floored the game’s followers with his previously unthinkable displays of parking 50-plus homers a year into the bleachers, or the street behind the bleachers, or maybe even the building across the street. Throughout the Roaring Twenties, Ruth was more than baseball’s greatest player. He was baseball, thundering upon a landscape of sterile offense left for dead by the trick pitches, scandal and political infighting of the 1910s.

Ruth didn’t just make news; he made big, bold headlines, as the press magnified his every move whether good or bad. His genuine charisma, worthy arrogance and importance to the New York Yankees’ fortunes justified the media’s obsession with him.

As Ruth went, so went the Yankees, even if the team was often talented enough to be a contender without him. When Ruth was on fire, the Yankees were unbeatable—winning six American League pennants and three World Series. When the good life’s perils caught up to the Bambino—most notoriously with his 1925 “bellyache”—the team stumbled.

Ruth could not have timed his emergence to immortality any better. The game’s offense, immensely aided by the banishment of the spitball and an accelerated refresh rate of virgin white baseballs, prospered like never before in the 1920s—and there was no shortage of star sluggers salivating at the plate. Rogers Hornsby, Lou Gehrig, George Sisler, Paul Waner, Henry Heilmann, Al Simmons, Hack Wilson and an aging yet still very productive Ty Cobb were the brightest of stars amid a galaxy of hitters who gorged on a baseball that was as fresh in the ninth inning as it was in the first.

The hitters’ gain was, finally after twenty years of deadball dominance, the pitchers’ loss. Before the 1920s, an earned run average of 4.00 would have been scorned upon; but with the cork-filled dynamite of the new decade, such a stat was often welcomed with relief from pitchers who found that they were ducking and covering with greater regularity.

In the stands, pitchers found few friends among the many, many others who were insatiably screaming for double-digit run production. Attendance in the 1920s jumped 50% over the 1910s, and every major league team made a profit. Except one. The Boston Red Sox virtually shipped all of their top talent—starting with Babe Ruth—to the Yankees for cash and/or inferior players, and still failed to net even a dime as angry Fenway Park crowds thinned out in front of the Red Sox’ skeletal remains on the field. Less happy was the rest of baseball, who blamed the Red Sox for making a monster out of Babe Ruth and the game’s new superpower playing out of Yankee Stadium.

Forward to the 1930s: Dog Days of the Depression The majors take a hit from the Great Depression as both attendance and bravado are on the wane—until newborn icons Joe DiMaggio and Ted Williams emerge to rejuvenate the game’s passion for the fans.

Back to the 1910s: The Feds, the Fight and the Fix The majors suffer growing pains as they deal with a fledgling third league, increased scandal and gambling problems, and a brief interruption from the Great War.

The home for both the New York Yankees and Giants becomes the exclusive host to the first Subway Series.

The New York Yankees become one of baseball’s great dynasties at the willful expense of the Boston Red Sox and their Broadway-obsessed owner, Harry Frazee.

The Washington Senators’ one and only championship comes courtesy of a pebble in front of third base.

The good life—or too much of it—finally catches up with a bloated Babe Ruth.

The 1927 New York Yankees—the team often considered as the greatest ever—sweeps away the competition.

All but washed up, veteran pitcher Howard Ehmke gets the dream call for Game One of the World Series and delivers, setting the tone for a long-overdue championship for the Philadelphia A’s.